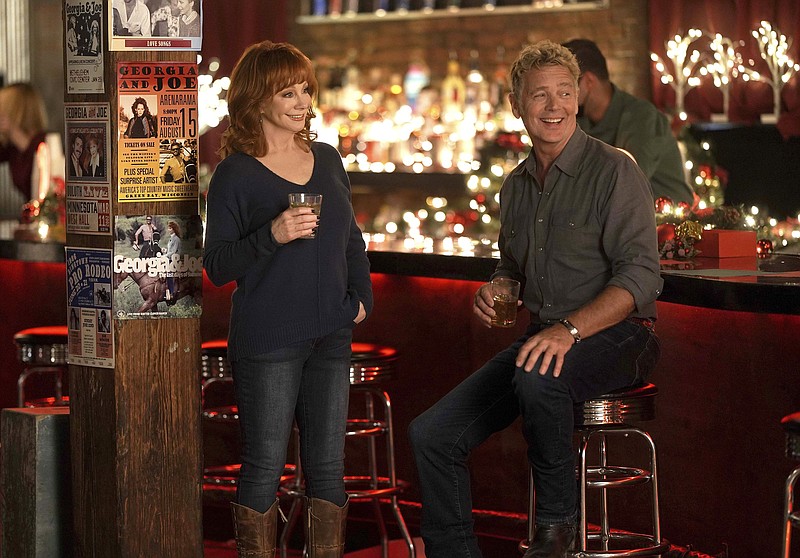 Old favorites such as 1965's "A Charlie Brown Christmas" may require a measure of strategy to watch. The classic Peanuts special will air on PBS and, for a three-day window, be available free on Apple TV+.

The twist for the Food Network's film is its debut on corporate sibling Discovery+ which, as with other streaming services, offers a free-trial option. Like Santa Claus scoring courtesy cookies, enjoy the gift while it lasts.

Here's a sampling of what to watch while sipping nog and nibbling on roasted chestnuts — if available on store shelves.

"A Rich Christmas," streaming now on BET+. A self-absorbed socialite gets a new perspective on life when she's forced to work at a family homeless shelter. Bill Bellamy and Tyler Abron star.

"A Kindhearted Christmas," GAC Family (formerly Great American Country), Saturday. A woman wants to emulate her late husband's generosity, bringing joy to others and maybe to herself. Jennie Garth stars.

"A Kiss Before Christmas," Hallmark Channel, Sunday. James Denton, Teri Hatcher and Marilu Henner star in the tale of a man who gets the alternate life he wished for, and tries to give it back.

"Who Is Christmas Eve?" Bounce, 7 p.m. Sunday. A young woman (Paige Hurd) abandoned as an infant delves into her past with help from her boyfriend (Romeo Miller) and an investigative genealogist.

"Reba McEntire's Christmas in Tune," Lifetime, 7 p.m. Nov. 26. Georgia (McEntire) and Joe (John Schneider) broke up as a couple and a singing duo years ago, but their daughter wants a reunion for charity.

"Christmas Again," Disney Channel Dec. 3. Teenager Rowena is caught living the holiday over and over again after wishing that she could reclaim her life before her parents' divorce. Scarlett Estevez stars.

"It's a Wonderful Life," NBC, 7 p.m. Dec. 4, and Dec. 24. Jimmy Stewart stars as a despairing man who finds value in his life with the help of an aspiring angel, Clarence, in this holiday classic.

"The Christmas Thief," ION Television, 8 p.m. Dec. 5. A novice private eye, home for the holidays and trying to solve burglaries blamed on Santa Claus, clashes with a local detective. Michelle Borth and Vivica A. Fox co-star.

"Kelly Clarkson Presents When Christmas Comes Around," NBC 9 p.m. Dec. 1. Clarkson hosts a special that offers music, celebrates tradition, and gives to those in need.

"Michael Buble's Christmas in the City," NBC, 9 p.m. Dec. 6, and Dec. 22. The pop singer marks the 10th anniversary of his album "Christmas" with music and comedy.

"A Charlie Brown Christmas," now on Apple TV+ (free from Dec. 11-13) and on PBS Dec. 19 (check local listings for time). Is Christmas all about the goods or good-heartedness? The question unsettles Charlie Brown in this 1965 classic.

"Rudolph the Red-Nosed Reindeer," CBS, 7 p.m. Monday. A reindeer finds that being different is worthwhile in this 1964 special that's based on the Johnny Marks song and narrated by Burl Ives.

"A Home for the Holidays," CBS, 8 p.m. Dec. 5. In the special's 23rd annual broadcast, inspiring stories of youngsters adopted from foster care are joined with performances by pop artists.