DHS will require covid vaccinations at some facilities, despite state law against mandates 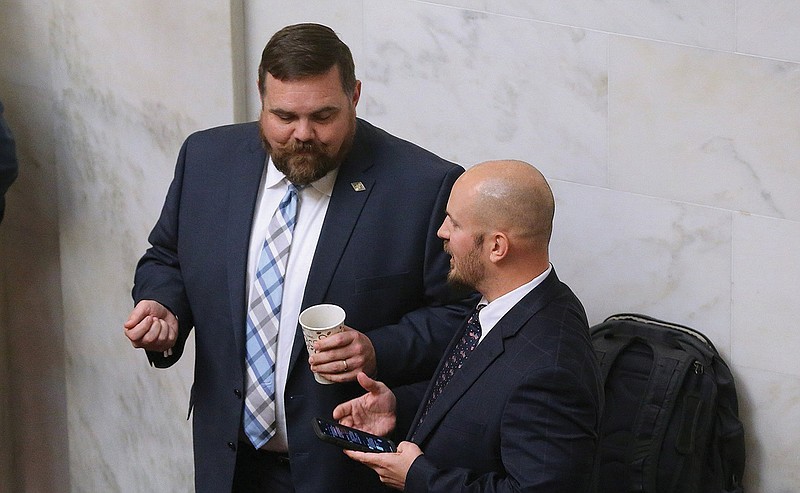 State-run medical facilities plan to require covid-19 vaccinations for their employees, in compliance with a federal regulation but contradicting a state law prohibiting such requirements.

Documents, provided to the Arkansas Democrat-Gazette on Wednesday, show that the state Department of Human Services has notified employees in its health care facilities that they must comply with the federal vaccine mandate, which has been challenged in federal court.

State law dictates that any state-run agency get approval from the Arkansas Legislative Council to enact a vaccination requirement. Both Human Services Department and the University of Arkansas for Medical Sciences are in discussions with the council after announcing their mandates in the past week, their spokespeople said.

On Monday, UAMS notified its employees that they must be fully vaccinated by Jan. 4, aligning with the Nov. 4 regulation from the federal Centers for Medicare and Medicaid Services requiring employees at Medicare- and Medicaid-funded facilities to be fully immunized or face potential sanctions.

These facilities also face a Dec. 6 deadline for employees to receive at least a first dose of Pfizer or Moderna vaccine or the one-dose Johnson & Johnson shot.

The federal mandate also applies to the five Human Development Centers, the Arkansas State Hospital and the Arkansas Health Center, all run by the state's Department of Human Services.

"The mandate will likely lead to severe worker shortages in facilities that care for our most vulnerable citizens," Hutchinson said. "I am hopeful a quick decision by the courts will end or delay implementation. If not, the state agencies should prepare to act on the federal requirement because a loss of federal funding will also put the residents at risk."

Department of Human Services issued memos on Nov. 10 for the State Hospital and on Nov. 12 for the Arkansas Health Center, stating that employees must comply with the federal vaccination requirement.

"If you are not fully vaccinated by Jan. 4, 2022, you cannot work at a DHS facility that participates in CMS programs unless you have a qualifying exemption," the memos state.

The state law, passed earlier this year, says that receiving a covid-19 vaccine "shall not be a condition of education, employment, entry, or services from the state or a state agency or entity."

However, the federal mandate states that "[CMS] will not hesitate to use its full enforcement authority to protect the health and safety of patients" at facilities that do not comply with the requirement.

"We're considering next steps, and that includes working closely with the legislature and continuing to watch the litigation," Webb said in an email.

About 37% -- 963 of the 2,632 employees -- at the seven affected Department of Human Services agencies are currently unvaccinated, according to data Webb provided Wednesday.

UAMS spokeswoman Leslie Taylor said Monday that about 80% of UAMS' employees are fully vaccinated, and many have received booster shots.

Employees with UAMS and the Department of Human Services have the option of requesting medical or religious exemptions.

UAMS Chancellor Cam Patterson said in the announcement Monday that the institution could lose more than $600 million per year, or nearly 60% of its total funding, if it does not comply with the federal vaccination mandate.

"We were given a very short timeline by CMS, and we had to go ahead and act to ensure that come Jan. 5, 2022, we can continue to treat Medicare and Medicaid patients, continue our residency programs and continue to search for cures in our research laboratories," Taylor said.

It won't retract the mandate while discussing its options with the Legislative Council, she said.

The federal Occupational Safety and Health Administration had issued a temporary requirement for companies with more than 100 employees to require vaccinations or covid-19 testing, but a Nov. 12 appeals court ruling put a stay on the mandate "until further court order."

Hutchinson said Wednesday that he has "directed the impacted state agencies to support the federal lawsuit."

Lundstrum sponsored the bill that became the law prohibiting vaccination mandates in government agencies. She said Wednesday that she is "disappointed" that state agencies are caught between state and federal requirements.

"I hope that states' rights will be respected," she said. "The feds are basically way out of bounds."

In 2012, the U.S. Supreme Court ruled that the Affordable Care Act could not require states to expand Medicaid because the federal government could not predicate Medicaid funding on compliance with a federal law or regulation. Ballinger said the same standard should apply to the federal vaccination requirement.

"Enforcing this policy for a rule that may or may not be in effect sometime next year while it's being litigated is a very foolish thing," he said.

Ballinger tweeted Monday that UAMS "should plan to operate without State funding" for breaking state law.

State Rep. Jeff Wardlaw, R-Hermitage, the Arkansas Legislative Council's House chairman, said he could not comment on the Legislature's willingness to cut funding from state entities or the council's probability of allowing those entities to enact vaccine mandates.

"I would say they run a risk of [losing state funding] because they would be absolutely violating state law, but the kicker to it is the supremacy clause says the feds outdo state law, so it kind of goes both ways," Wardlaw said. "They just have to take the risk on what the least costly alternative is."

Wardlaw does not support vaccination requirements but said he would vote in favor of allowing state-run medical facilities to implement them if they take a request before the council because of their potential losses of Medicare and Medicaid funds otherwise.

Ballinger was not the only legislator who took to Twitter this week to voice opposition to UAMS' vaccine mandate.

"UAMS is a vital organization that is needed in Arkansas," said state Sen. Trent Garner, R-El Dorado, in a Tuesday tweet. Its "leadership has decided to risk the treatment of thousands of patients and hurt countless employees across the state. The work by UAMS is too important to allow the leadership to risk it all.

"If UAMS is the body, the leadership is a cancer that is risking the health of the whole," Garner continued in another tweet. "The cancer at the top must be cut out to save UAMS."