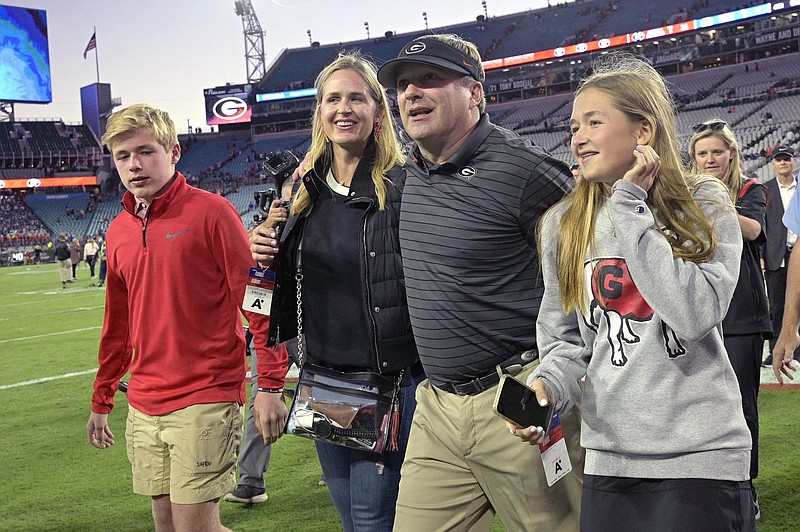 Georgia head coach Kirby Smart, second from right, walks with his family after getting a win over Florida in an NCAA college football game, Saturday, Oct. 30, 2021, in Jacksonville, Fla. (AP Photo/Phelan M. Ebenhack)

Georgia Coach Kirby Smart is a big fan of the Burlsworth Trophy, which is named in honor of former University of Arkansas All-America offensive lineman Brandon Burlsworth and since 2010 has been presented annually to the nation's top player who began his career as a walk-on.

"I don't know that people give that award the proper recognition," Smart said on Wednesday's SEC teleconference. "Probably one of the just coolest, greatest awards to me, because it means, 'I went here to school without a scholarship. I went to do something special.'

"And walk-ons are special, because they do it for free. Most of them, by the time to get to [being nominated] for that award, they're on scholarship. They've proved everybody wrong."

Georgia quarterback Stetson Bennett is one of three finalists for this year's Burlsworth Trophy along with Arkansas linebacker Grant Morgan and Troy linebacker Carlton Martial.

"I was super proud for Stetson," Smart said. "What a great honor."

Before Smart went into coaching, the All-SEC defensive back at Georgia signed as a free agent with the Indianapolis Colts after the 1998 NFL Draft.

When Smart went to mini-camp with the Colts in the spring of 1999, among the other rookies he met was Burlsworth, the team's third-round draft pick.

After the mini-camp, Burlsworth returned home and was killed in a car accident.

The Burlsworth Trophy was created by his family to keep his legacy alive.

"It's a special award to me, because I was with the Colts in the 1999 preseason, and Brandon Burlsworth was there," said Smart, who was released during training camp. "We both were with the Colts at the same time. Then the tragic accident happened.

"I was quick to explain that to Stetson, the backstory behind the award and what it means and what Brandon was like.

"I think Stetson feels honored to be one of the finalists for that."

LSU's last two games were against Alabama and Arkansas, with the Tigers losing 20-14 to the Crimson Tide on the road and to the Razorbacks 16-13 in overtime at home.

So who better to ask about Saturday's Arkansas-Alabama game than LSU Coach Ed Orgeron?

"It ought to be a great matchup," said Orgeron, who added he knew Coach Sam Pittman would have the Razorbacks ready.

"Alabama is very strong up front. You have to be able to stop the run on those guys. They're very athletic, and their defense is very stingy.

"So they'll have their work cut out, but can Arkansas play with them? As far as from what I've seen, yes."

The Rebels beat Texas A&M 29-19 in a night game, so Kiffin had time to appear on the morning show.

"He's setting the stage for a really good Egg Bowl," Leach said Monday when asked about Kiffin's compliment. "I'd be lying if I told you he didn't think he's the best offensive coordinator.

"It was modest of him to say ... We'll just let the love keep coming both directions."

The Egg Bowl will be played on Thanksgiving night when the Bulldogs host the Rebels.

Texas A&M Coach Jimbo Fisher said at his Monday news conference that he's not interested in the LSU job -- again.

Fisher's comments about being committed to Texas A&M came exactly four weeks after he said he wasn't interested in leaving for LSU after it was announced Ed Orgeron is going to be out as the Tigers' coach effective the end of the season.

"I want to be at A&M," Fisher said Monday. "And I ain't going nowhere. I love being right here."

Despite what Fisher continues to say, rumors persist that he's the top candidate to replace Orgeron because LSU Athletic Director Scott Woodward previously held the same position at Texas A&M and hired Fisher from Florida State.

Woodward negotiated a contract with Fisher that doesn't have a buyout clause, meaning he can leave for another coaching job with no financial penalty.

Thus Fisher felt compelled to reiterate that he will remain at Texas A&M.

"I've told everybody I'm staying here," said Fisher, who is 33-13 with the Aggies. "And I told everybody I plan on being the coach at A&M. Everybody thinks all coaches lie, I know and [the media] don't believe us. All right? That's why we don't trust y'all. OK? So we're even."

"We're going to recruit an unbelievable class this year," Fisher said. "OK? So that means I'm the dumbest human being on God's earth [to leave for LSU]. OK?

"Who's going to recruit all these guys to A&M so I can go across over here and go play against them. OK? If I did that, you ought to say, That's the dumbest human being, I don't want him to be my coach.' OK?"

The Bulldogs won 43-34 at Auburn last Saturday when they scored 40 unanswered points after the Tigers took a 28-3 lead in the first half.

Leach was Washington State's coach in 2017 when the Cougars beat Boise State -- coached by Harsin -- 47-44 in triple overtime after the Broncos led 31-10 in the fourth quarter.

The Bulldogs' record for biggest comeback had been 20 points when they beat Louisiana Tech 35-34 to open this season.

Florida and Missouri are both in the SEC East, but the Missouri campus in Columbia, Mo., is 1,007 miles north of the Gators' home in Gainesville, Fla.

"I'm praying for snow," Tigers Coach Eli Drinkwitz said at SEC Media Days in July in reference to Florida's game at Missouri on Saturday. "Dan [Mullen] is going to complain about everything."

Mullen, Florida's coach, has a lot to complain about these days with the Gators at 5-5 and mounting media speculation about his job security, but he shouldn't have anything negative to say about the weather in Columbia for Saturday's 3 p.m. kickoff.

The forecast calls for partly cloudy skies with a high of 58 degrees.

"Maybe we can get some man-made snow," Drinkwitz said Tuesday. "I don't think that's against the rules, is it?"

The Beamer name is synonymous with Virginia Tech football.

Shane Beamer, in his first season as South Carolina's coach, was a player and assistant coach for his father at Virginia Tech from 2011-15.

With Justin Fuente being fired as the Hokies' coach this week, Shane Beamer's name naturally came up as a candidate for the job.

Beamer made it clear he wants to stay at South Carolina, where he also had previous experience as an assistant coach.

"This is the place I want to be," Beamer said Tuesday. "This is my dream job, and I wasn't saying that to sound cool in a press conference or to get this job. This is where my wife, Emily, and my family want to be.

"We didn't put up a sign at Williams-Brice Stadium saying 'Welcome Home' on the football stadium to be trendy. This is home."

Beamer has led the Gamecocks to. 5-5 record, including a 40-17 victory over Florida.

"My son, Hunter, he's in the second grade, and I want him to graduate high school in Columbia," Beamer said. "Recruiting is going well. There's a lot of energy and enthusiasm around our program.

"I want to bring an SEC championship to Columbia, and we are in the beginning stages of doing that."

Ed Orgeron knows he's done as LSU's coach when the season ends, but he said that doesn't make losing 16-13 in overtime to Arkansas as the Tigers did last week any easier.

"When someone says 'What do you have to lose?'... it's a game, and we play to win the game," Orgeron said Monday at his weekly news conference. "That's important to us, to be competitive."

LSU needs to win its final two games against Louisiana-Monroe and Texas A&M to become bowl eligible and give Orgeron one more chance to lead the team.

"I want them to finish strong and be proud," he said.

Georgia Coach Kirby Smart said that with the SEC expanding to 16 teams with the addition of Oklahoma and Texas no later than 2025, scheduling games against FCS teams such as Charleston Southern -- the Bulldogs' opponent on Saturday -- could become a thing of the past.

Florida had to rally to beat Samford 70-52 last Saturday, but most of the matchups are lopsided victories for the SEC teams.

But Smart said playing FCS teams is important for those programs because of the financial guarantee -- usually in the $600,000 to $800,000 range -- they receive from SEC schools.

"It funds sometimes 50%, sometimes 45% of their budget to have one of these games. There's a group of young men that are going to come in here and get an experience they would never get otherwise -- an opportunity to go play.

"But the league is going to get bigger. There's going to be more [SEC] games, and fans want the bigger games. Fans don't usually want these games. It's a pulling of two separate ways.

"Some of these FCS schools are what keep these kids' hopes alive to play football in college when you might not be an SEC-caliber player."

5(6);Arkansas;7-3;Golden Boot back in Fayetteville

13(12);Florida;5-5;Beating Samford nothing to celebrate

Williams, a transfer from Ohio State, has been dynamic on offense and special teams.

Williams also is averaging 37.4 yards on nine kickoff returns, including two for touchdowns of 100 and 83 yards against Southern Mississippi.

WHERE Bryant-Denny Stadium, Tuscaloosa, Ala.

The Crimson Tide will go for their 15th victory over the Razorbacks, who figure to be more competitive than in recent games with Alabama winning by an average of 39 points, including 52-3 last season.

For the first time since 2016, both the Razorbacks and Tide will be ranked when they meet. The No. 1 Tide beat the No. 16 Razorbacks 49-30 in Fayetteville in that matchup.

In 2014 Alabama beat Arkansas 14-13 in the closest game during the Tide's winning streak.

Alabama Coach Nick Saban is 17-2 all-time against Arkansas, including 3-2 when he was at LSU.

Charleston Southern at No. 1 Georgia

Tennessee State at No. 25 Mississippi State

Vanderbilt at No. 12 Ole Miss

407 -- Mississippi State record for completions this season by sophomore quarterback Will Rogers.

-- Chants from Baylor fans taunting Oklahoma after the Bears beat the Sooners 27-14.

-- Mississippi State Coach Mike Leach on why the trend of coaches being fired is on the rise.

"I think they are pissed, to be honest. I don't blame them. Just telling the truth. We have to put them in a better position."

-- LSU Coach Ed Orgeron on the mood of the players on offense with the Tigers behind held to 16 and 13 points in the last two games against Alabama and Arkansas.

"Calling a win a disappointment is disrespectful to the game."

"I don't need to worry about that with these guys. I really don't. This group's got great leadership. They've sold this program on Monday, Tuesday, Wednesday, you earn what you get on Saturday."

-- Georgia Coach Kirby Smart on the Bulldogs being motivated to play Charleston Southern. 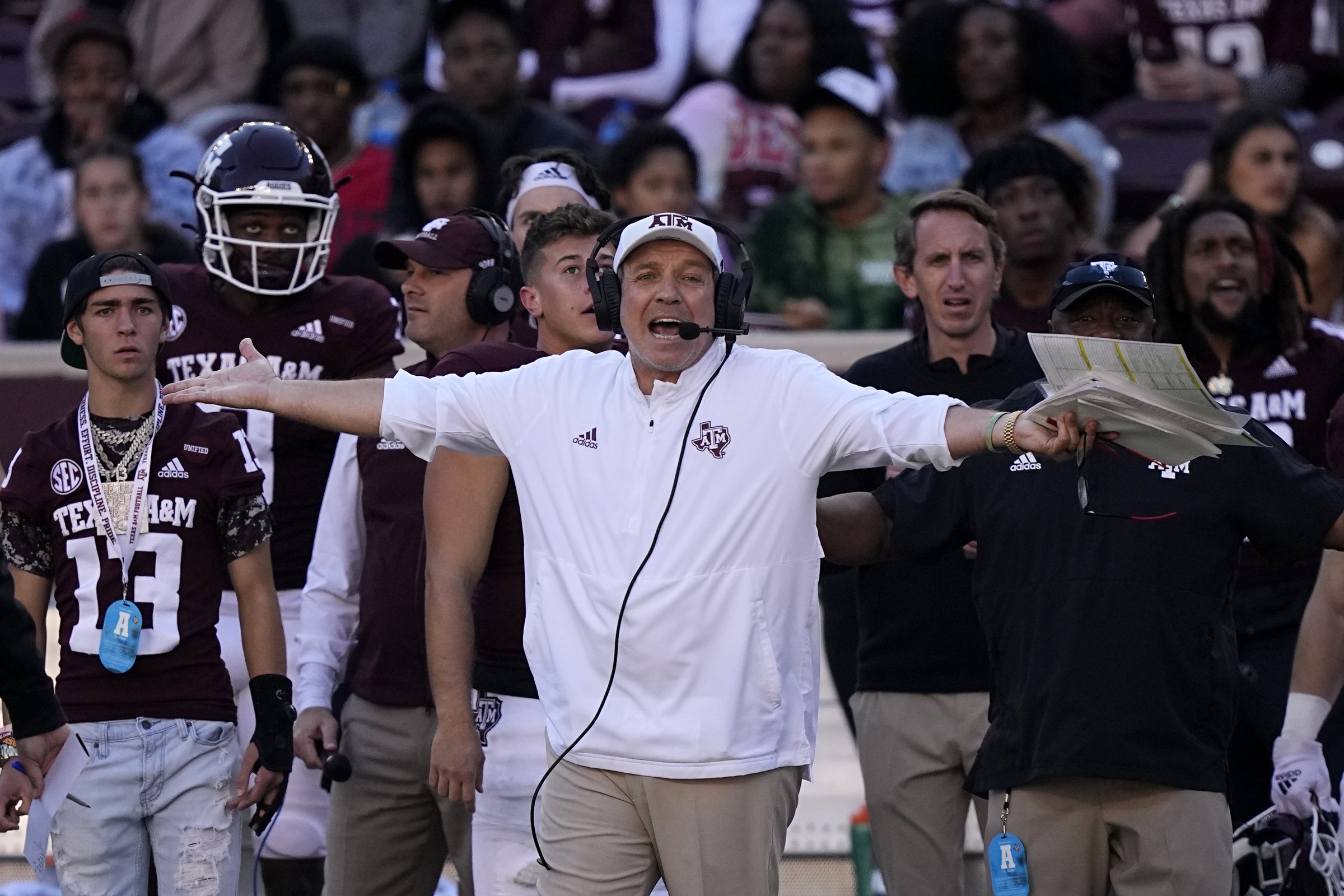 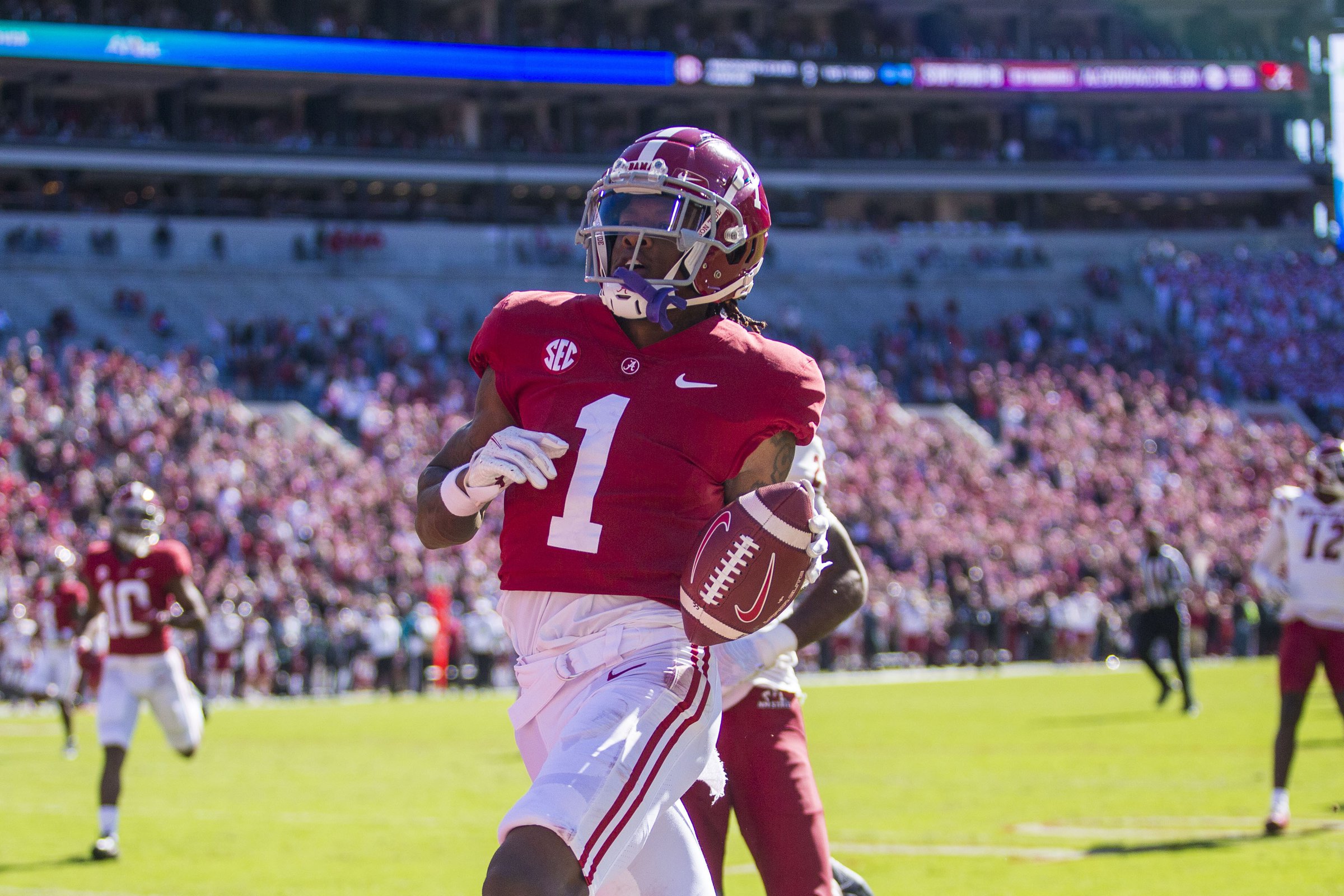 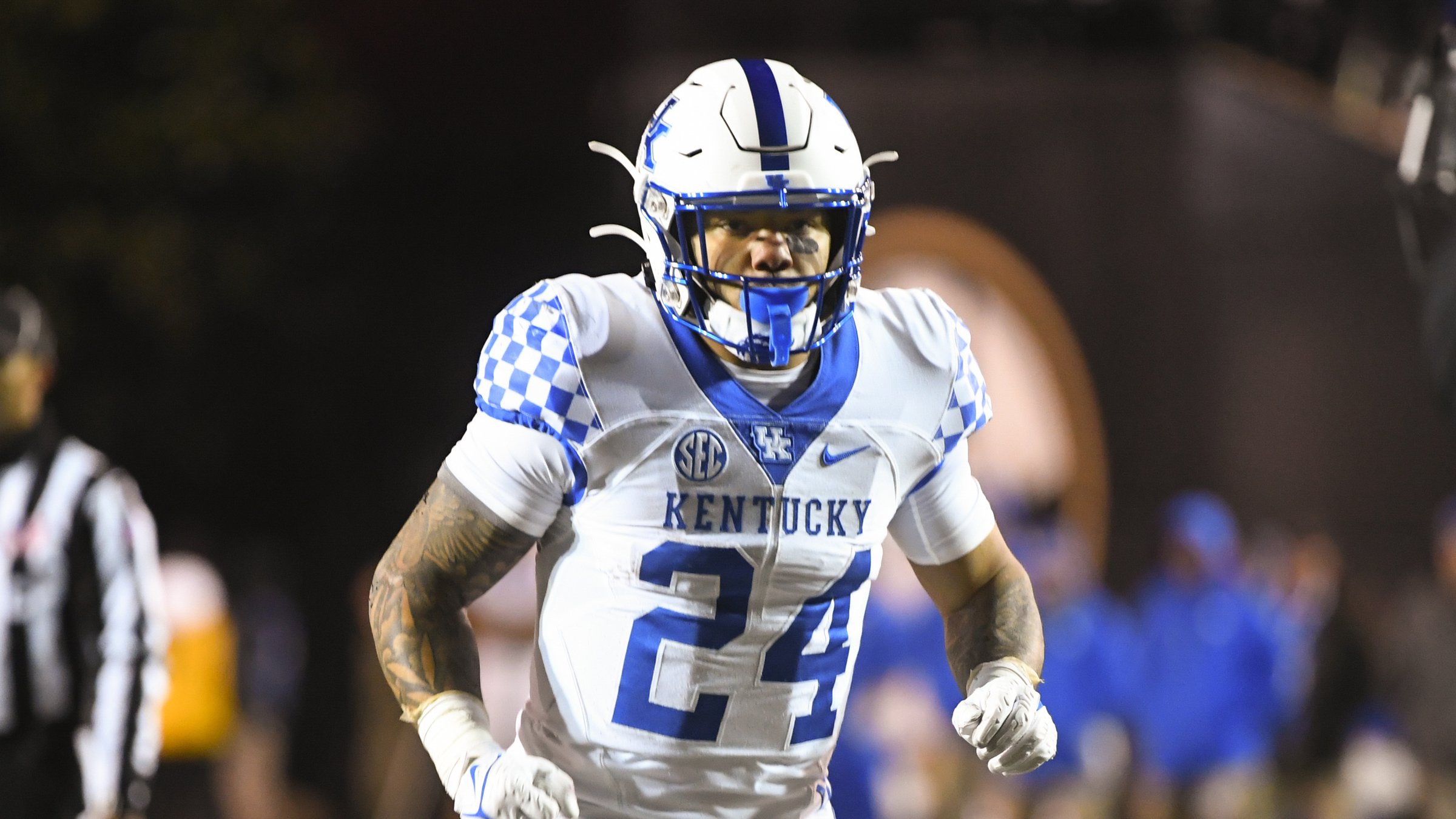 Kentucky’s Chris Rodriguez (24) and Missouri’s Tyler Badie are the only SEC running backs who are averaging more than 100 yards rushing per game this season. (AP/John Amis)
John Amis
ADVERTISEMENT