NWA PREP FOOTBALL REPORT: Stars to collide in 7A matchup 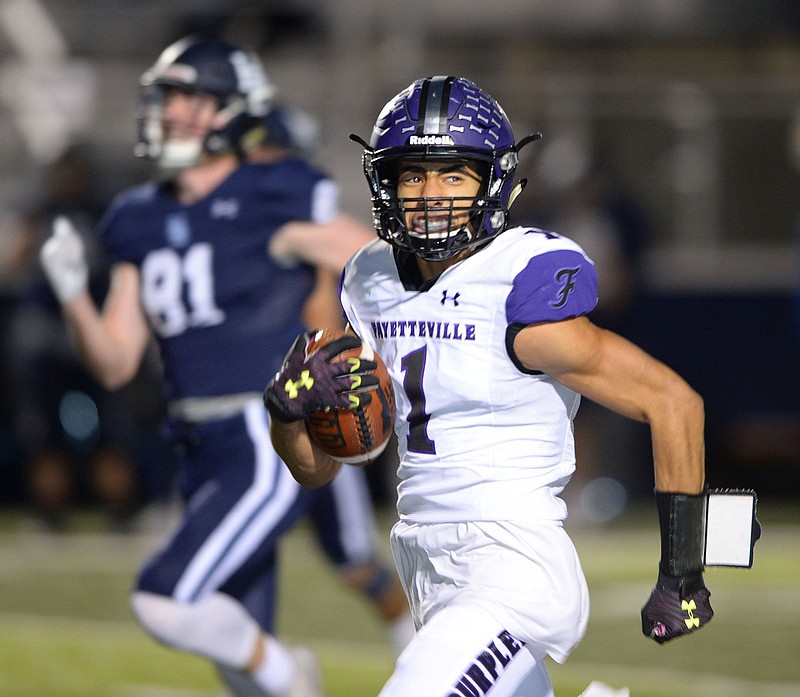 Fayetteville’s Isaiah Sategna is the state’s leading receiver who is a threat to score in a number of ways, but he’s not the only Bulldog worthy of attention. (NWA Democrat-Gazette/Andy Shupe)

Fayetteville's home game with Cabot on Friday will feature two of the best players in the state.

The Bulldogs are led by Isiah Sategna, the state's leading receiver who is committed to Arkansas. Cabot will counter Braden Jay, who plays many roles for the Panthers.

Jay displayed his versatility last week in a 53-7 win over Springdale Har-Ber in the first round of the Class 7A state playoffs.

Jay got Cabot (8-3) started when he took an end-around and scored on a 24-yard run against Har-Ber. He continued to make plays at receiver, running back, defensive back, and from the shotgun formation at quarterback while finishing with three touchdowns and 132 yards of total offense.

"(Jay) is involved in their offense a lot and he also plays safety on defense," Fayetteville coach Casey Dick said. "Coach (Scott) Reed does a good job of finding ways to get him the ball and we have to be aware of where he's at on the field."

Cabot must be aware of Sategna, the track star who can beat teams deep, take a handoff on an end-around, or catch a short pass and turn it into a long touchdown. But the Bulldogs have other star players worthy of attention including quarterback Bladen Fike, who received his first Division I offer last week from Middle Tennessee, a Conference USA member. Jalen Blackburn and Dylan Kittell are also top targets in the passing game and the emergence of sophomore Omar Murray has provided Fayetteville a running threat the Bulldogs lacked early in the season.

"We tried to keep the same routine and practiced Tuesday to Friday after watching film," Dick said. "We're ready to go."

Cabot's losses are to Bryant, Conway, and North Little Rock, all ranked teams in Arkansas' Overall Top 10 poll. Fayetteville hopes to reverse a trend after teams from the 7A-Central won three of the four matchups last week against the 7A-West.

Bentonville coach Jody Grant said his team didn't wait until this week to begin its preparations for North Little Rock.

The Tigers used their bye week to turn their attention to the Charging Wildcats, who will travel to Tiger Stadium for Friday's Class 7A state quarterfinal showdown.

"We went ahead and sold out last week to prepare for North Little Rock," Grant said. "We knew we had already spent a week on Fort Smith Southside, so truthfully this is our second week of preparation on this team.

"We've spent a lot of time studying their film and studying what they do, so I think we're already at the point where we want to play them. The bye week is nice, but obviously we want to play. We have kids that want to go out there and ready to get going again."

Grant said Bentonville (8-2) did shorten the schedules to some extent last week, but the Tigers also "got after it" during the practices and in the weight room. Many of the drills were done with the starters going against each other, and Grant said they also turned their attention to some of the things that needed improvement.

The time away from a game, however, did allow those players who are hurting the opportunity to relax and heal.

"Any time you have a bye week, you can take those players who are banged up and give them some days off for their injury," Grant said. "We had several guys who needed that. When you're in week 11 and 12, most teams have kids who are banged up. That's one of the pluses of the bye week.

"I think these kids have a good mindset going into the playoffs. They've been here and done that, and we all think we have a team that has a good chance to make little run here."

Elkins faces nearly a four-hour bus trip for its second-round playoff game on Friday at Stuttgart (10-1), home of the Ricebirds.

That's why Elkins will break up the trip by stopping in Morrilton to eat and do a walk-through before continuing on to southeast Arkansas to face the fourth-ranked team in Class 4A.

The Elks will need fresh legs to compete with the Ricebirds and star running back Cedrick Hawkins, who has rushed for over 1,200 yards this season.

"He's a great running back and we've got to try and contain him," Elkins coach Zach Watson said. "They've also got a really good group on the defensive line."

Stuttgart improved to 10-1 after beating a depleted Monticello team 42-7 that was missing several players who were forced to sit out after being involved in a fight against DeWitt the previous week.

Elkins began postseason play with a 29-23 win over Dardanelle. The victory was quite a turnaround from the previous week when Elkins lost 45-19 at Prairie Grove. Prairie Grove scored 38 consecutive points to break the game open after Elkins scored on its opening possession.

"We went out and executed our gameplan much better against Dardanelle," Watson said. "We had a gameplan against Prairie Grove but we didn't execute it very well."

Sophomore running back Da'Shawn Chairs had a big game against Dardanelle after mostly being contained at Prairie Grove. He earned Player of the Week honors after he rushed for 212 yards and scored four touchdowns on runs of 6, 13, 20, and 47 yards against the Sand Lizards, whose only loss came in Week 3 to Warren, 47-27.

Shiloh Christian coach Jeff Conaway noted his team has made successful runs in postseason play when all three parts of the game -- offense, defense and special teams -- have clicked and performed well.

It took a while for the Saints' offense to get going last week against Cave City, but the defense and special teams took up the slack until the offense found its groove. Shiloh recovered a botched punt attempt at the Cavemen 1 to set up a score, then Kaden Henley returned an interception 30 yards for another touchdown and turned a 6-0 lead into a quick 21-0 cushion.

"As a coach, that's what you want," Conaway said. "When all three phases are dangerous, that makes it a lot of fun to coach.

"If you go back and look at our playoff runs, it's been a very steady contribution from everybody. It's rare at times to see the special teams unit or the defensive unit make big plays or even produce points, but that's something we focus on and try some things to create those opportunities."

Shiloh (10-1) now turns its attention to a dangerous Ashdown team that makes the long trip to play Friday at Champions Stadium. While Shiloh defeated Cave City last week, Ashdown moved on with its 35-14 victory over Lonoke.

The Panthers' rather balanced attack will test the Saints' attention as quarterback Alex Keilbach has thrown for 1,434 yards and 17 touchdowns, most of it going to receiver Kaiden Winfrey and 6-foot-6 tight end Shamar Easter, who has already made a verbal commitment to Arkansas. Meanwhile, tailback Jay'den Fricks has run for 1,075 tards and 13 scores.

"What makes them tick and stand out when you watch the film is they have a lot of football players," Conaway said. "A lot of 4A schools are having players on both offense and defense, but Ashdown doesn't necessarily have to do that.

"The quarterback is very productive, a good decision maker and a good distributor of the football. You have those two receivers on the outside, then they have a really good running back. If you're not sound in your run defense, they can make you pay with their buck sweeps and running game. They make you play sound defensively."