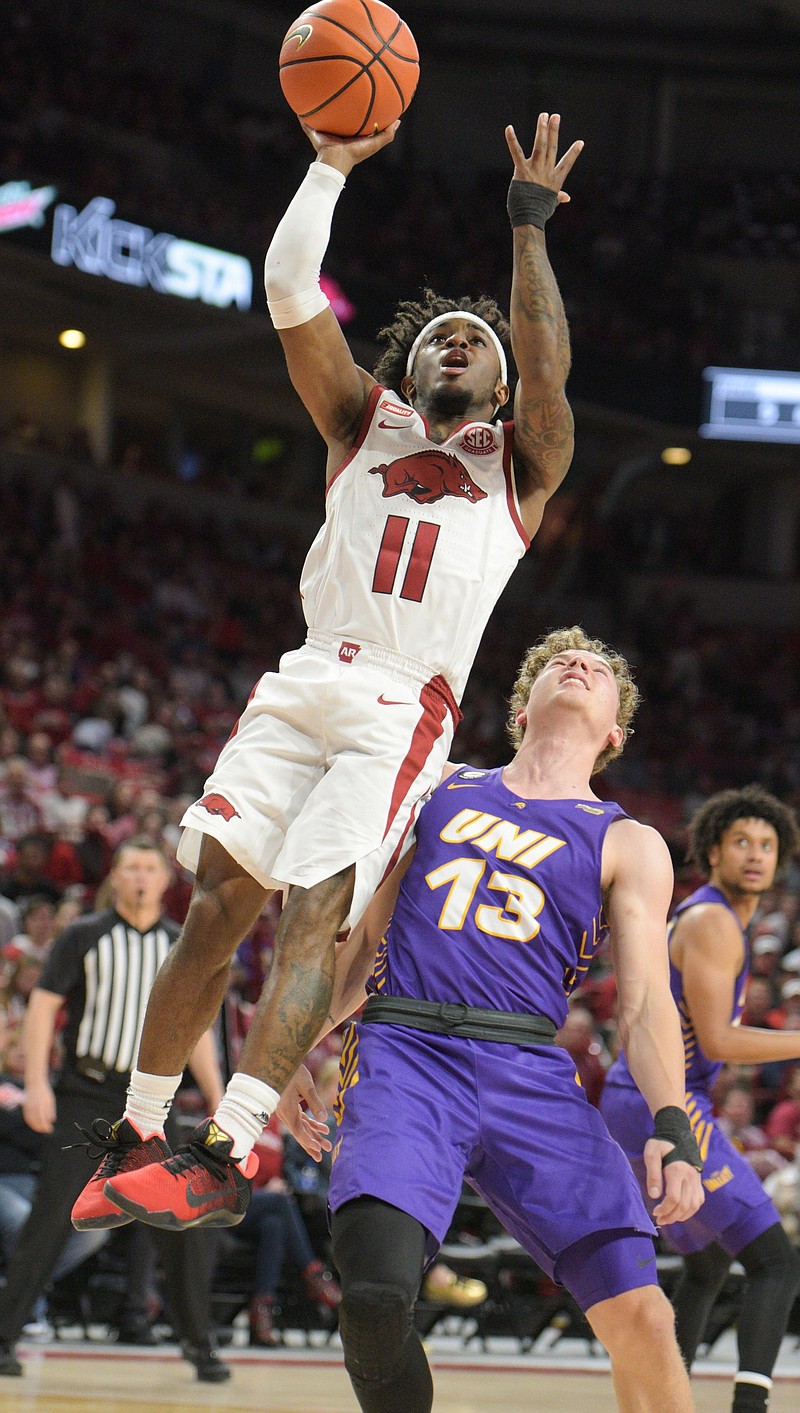 FAYETTEVILLE -- For 37 minutes it looked like the University of Arkansas might become Northern Iowa's latest Power 5 victim.

But the No. 16 Razorbacks put a late run together to avoid an upset and beat the Panthers 93-80 on Wednesday night in Walton Arena.

"I think it was just having to grasp the moment," Arkansas senior guard Stanley Umude said. "We were giving up a lot of three balls, and we just had to keep our composure and lock in on defense and get good shots down the stretch."

Jaylin Williams' tip-in gave Arkansas the lead for good at 79-78.

After a missed three by Northern Iowa, Au'Diese Toney hit a three-pointer, then made a steal and Williams scored on a layup with an assist from JD Notae to give the Razorbacks an 84-78 lead with 1:27 left.

Williams then made a steal and Chris Lykes was fouled and hit both free throws.

Another turnover by the Panthers led to an intentional foul by Green and Notae hit both free throws.

"We just kept pushing, kept going," Lykes said. "I think that's what led to the run."

The Razorbacks (3-0) survived a three-point barrage by the Panthers (1-2) as well as the loss of starting sophomore point guard Davonte Davis to an ejection early in the second half.

"I thought we were close to guys, but they still made threes," Arkansas Coach Eric Musselman said. "And so we changed our defense coverage the last four-and-half minutes and started switching more. That helped us tremendously."

"There's not many games I've coached where a team made 27 field goals and 17 of them are from three," Musselman said. "Give them a ton of credit. They play hard, they cut hard. They know their roles.

"Having said that, it was good for us tonight, Devo not being available down the stretch. We had other guys step up."

Lykes, a senior guard and transfer from Miami, scored 26 points in 31 minutes off the bench.

"My teammates did a good job finding me, as they always do," Lykes said. "Just took more of an aggressive approach on offense and then made sure I was more locked in on defense."

Davis, who scored 10 points, was called for a Flagrant 2 foul and ejected with 14:55 left when he body-checked Trae Berhow and sent him flying into the court-side seats.

"It was a physical game. It happened. We talk about keeping our composure and how much we need him and you move on."

Notae took over at point guard in Davis' absence and delivered with 17 points, 9 assists and 8 rebounds.

"It's real comfortable to play with him, because you know he's always going to be in control," said Umude, who had 10 points and nine rebounds. "Playing with a threat like that, it takes pressure off of other guys, too.

"Just moving without the ball and you knowing that he's going to find you, it's a good feeling to be out there with him."

Williams had 11 points, a career-high 7 assists and 6 rebounds. Toney had 13 points and six rebounds.

Berhow led Northern Iowa with 23 points and hit 7 of 11 three-pointers. Green and Nate Heise each added 16 points for the Panthers.

"Coming in, one of the concerns that we had was their depth and the quality of their roster," Jacobson said of Lykes leading the Razorbacks in scoring off the bench. "If it wasn't Lykes tonight, there was a good chance it was going to be somebody else. And if not that guy, yet somebody else."

Umude, a transfer from South Dakota, could relate to the Northern Iowa players' motivation playing an SEC team.

"I think they were just playing real free and they were playing with no pressure, so they were just letting them fly from wherever," Umude said. "But they had a game plan and they played well, so it's a good win for us, for sure, because we feel like that'll be a future NCAA Tournament team."

KEY STAT The Razorbacks outscored the Panthers 42-16 on points in the paint. 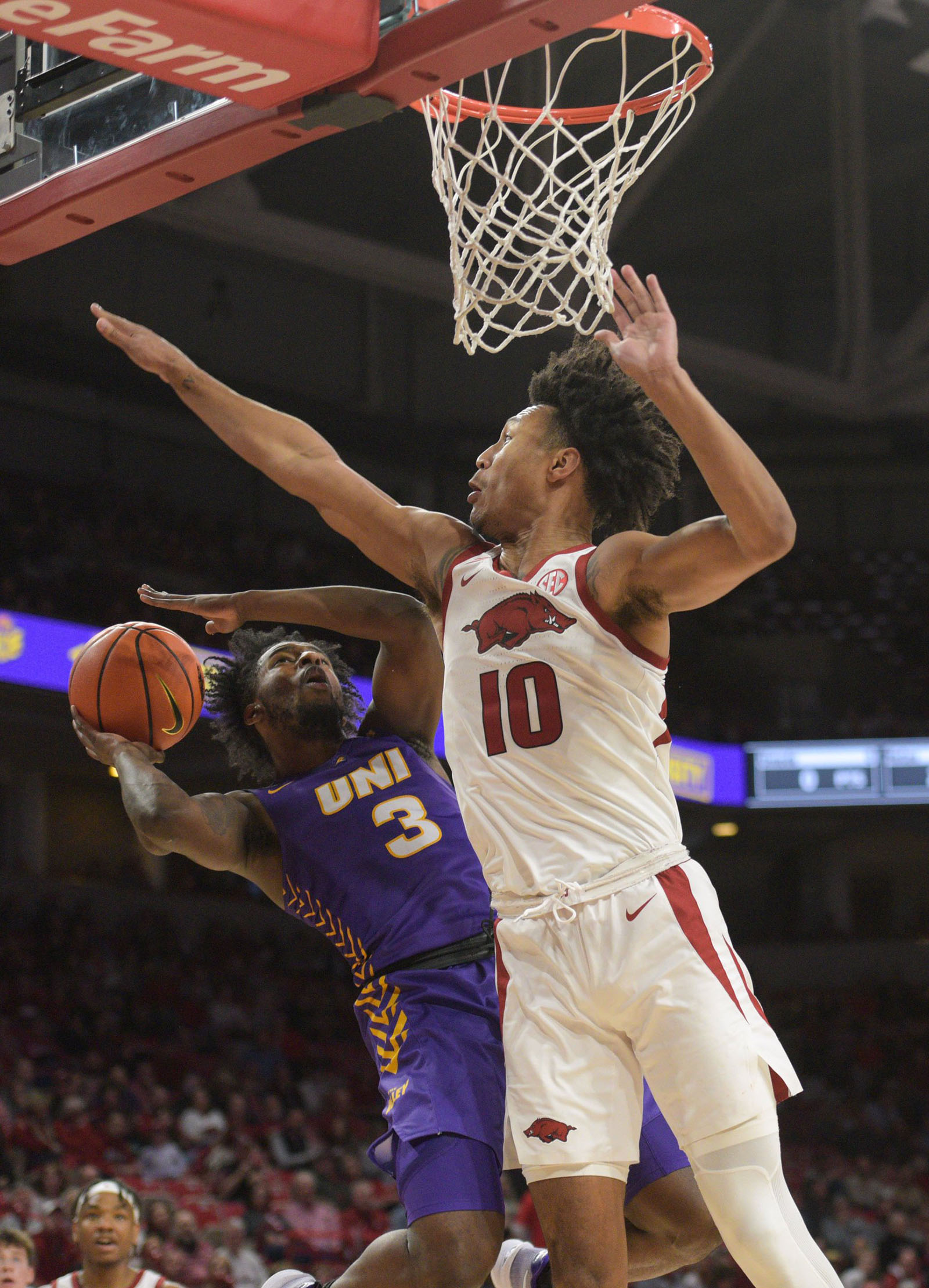