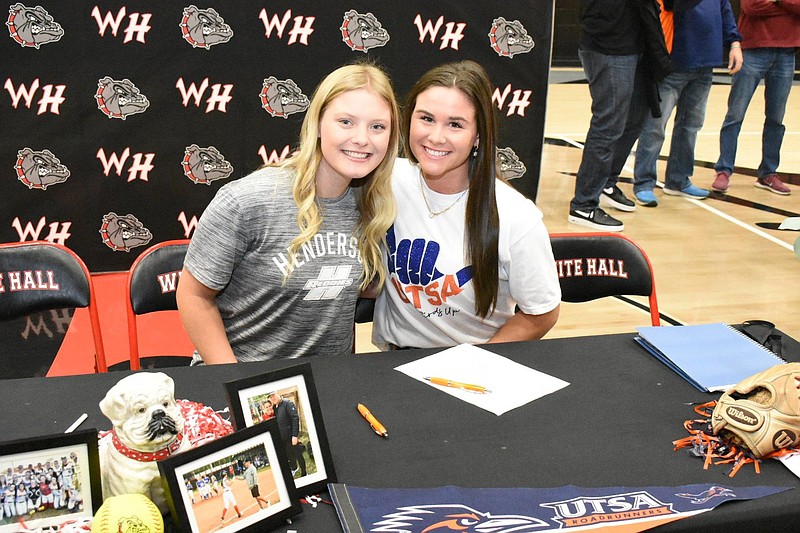 White Hall High School softball teammates Sophie Weaver (left) and Lilly Hood sit next to each other Thursday during their signing ceremonies at the school’s gymnasium. Weaver officially committed to Henderson State University, and Hood will attend the University of Texas at San Antonio. (Pine Bluff Commercial/I.C. Murrell)

Lilly Hood said she always wanted to be in a bigger city.

The White Hall High School middle infielder officially signed with the University of Texas at San Antonio on Thursday to continue her softball career, as teammate and pitcher Sophie Weaver signed her letter of intent with Henderson State University.

"I just loved the coaches," Hood said when asked about joining the Roadrunners. "From Day 1, they were so welcoming. It felt like family from the second I stepped on campus. The girls who are in my class going in with me, I love them. They are like my best friends already, and I always wanted to be in a big town, so it just worked out."

Hood's basketball teammates showed their support donning bright orange UTSA shirts, and her youth coaches sported UTSA ballcaps inside Bert Honey Gymnasium, where she and Weaver signed their letters of intent. Starting in the spring of 2023, they will root on their star second baseman and shortstop as she joins a program hoping to right the ship from a 15-31 season in 2021 (8-12 in Conference USA).

Hood and Weaver are among four Lady Bulldogs who are going into their fourth season on the varsity, joining Laykin Hartsfield and Emma Rongey. Last year, they helped the team reach the second round of the 5A state playoffs, losing to eventual state champion Benton. White Hall also finished second in the 5A-Central Conference.

"This year, I expect very good things from us," Hood said. "We have aspects of the team we never had before, and I think it's going to all fall together when the season comes around."

Weaver will be in the circle to try and help return White Hall to the summit of 5A softball. Her sister Abby Weaver was a standout on all three of White Hall's state championship teams (2012-14) before carving out a career at Southern Arkansas University.

Sophie Weaver is following in her sister's footsteps heading to the Division II Great American Conference.

"She just kind of said, you've got to work," Sophie Weaver said about Abby's words of advice. "You can't just expect to not work and then get to play. You've just got to want it."

Sophie Weaver said she attracted plenty of offers but felt Henderson was the place to be after attending a couple of camps there. The Reddies finished 13-31 and 10-23 in the GAC.

But for now, Coach Mark Akins has Weaver and Hood on deck to help White Hall build on a winning mark.

"We got a really good group of older kids and we've got a really talented group of younger kids coming up, not just this year but next year and quite a few years coming up," he said. "These two kids are definitely part of it. I had a group of four freshmen that started on varsity, not just Sophie and Lilly, but Laykin Hartsfield and Emma Rongey. They haven't slowed down up to this point, and I'm excited to see what these kids do." 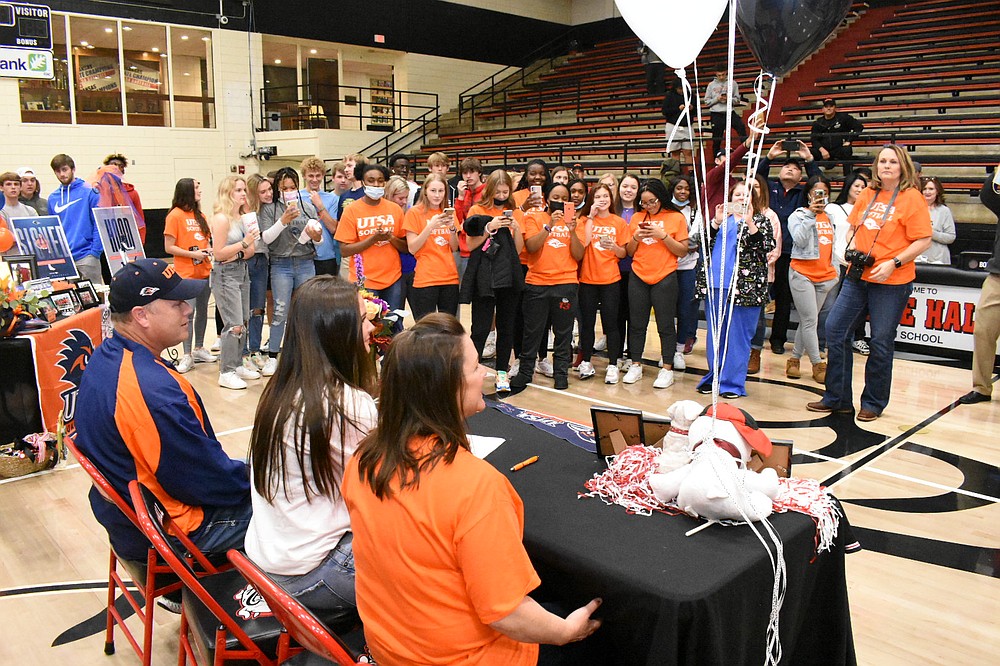