He urges talking, working together by Compiled by Democrat-Gazette Staff From Wire Reports | November 19, 2021 at 4:39 a.m. 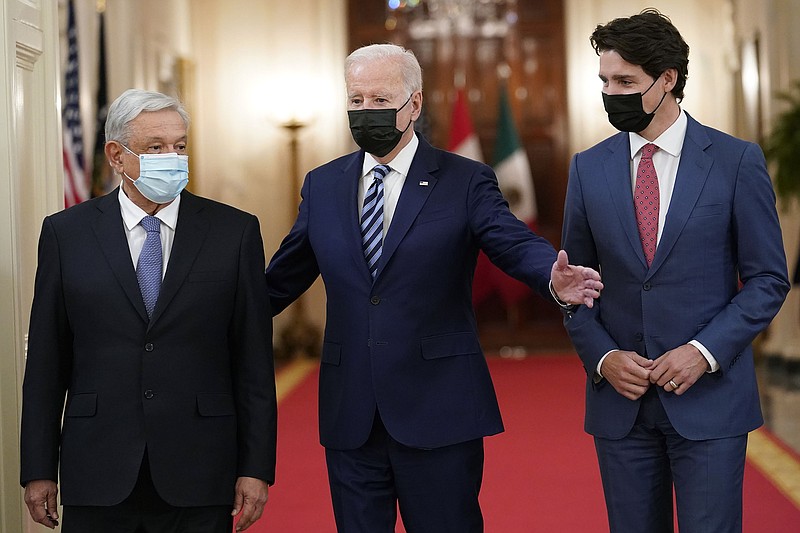 WASHINGTON -- Reviving three-way North American summitry after a five-year break, President Joe Biden on Thursday joined with the leaders of Canada and Mexico to declare their nations can work together and prove "democracies can deliver" even as they sort out differences on key issues.

But as Biden, along with Canadian Prime Minister Justin Trudeau and Mexican President Andres Manuel Lopez Obrador, spoke of their mutual respect, the three leaders also found themselves dealing with fresh strains on trade, immigration, climate change and other matters.

"We can meet all the challenges if we just take the time to speak to one another, by working together," said Biden, who hosted the North American neighbors for what had been a near-annual tradition in the decade before Donald Trump became president.

It was a day of full-on diplomacy that required careful choreography as Trudeau and Lopez Obrador each met separately with Biden and Vice President Kamala Harris before gathering for a three-way conversation in the East Room that featured a language mix of English, French and Spanish.

As they played up the closeness of the alliance, points of tension were also clear.

There are differences between Washington and Ottawa over proposed tax incentives that would benefit U.S. electric car auto manufacturers, frustration from Lopez Obrador that the U.S. isn't moving to issue more temporary work visas even as American businesses complain that they have a worker shortage, and disappointment by the U.S. and Canada that Mexico is not moving faster to address climate change.

Biden met first with Trudeau, calling the U.S.-Canada relationship one of the easiest in the early going of his presidency.

[Video not showing up above? Click here to watch » arkansasonline.com/1119canadaus/]

But as they sat down for talks, the president also confirmed their differences over proposed electric vehicle tax incentives in his social services and climate bill.

In recent weeks, the Canadian government has argued that the tax credit offered to U.S. consumers who buy American-made electric vehicles is in breach of the accord. Speaking to reporters at a news conference Monday, Trudeau said the Biden administration's buy-American ethos is "counterproductive" to promoting commerce between the two countries.

"It's an issue that I've already underlined very often with President Biden, and it will certainly be part of important conversations that we'll have later this week," Trudeau said.

"We're going to talk about that," Biden said. "It hasn't even passed yet in the House."

The provision in Biden's proposed spending plan would offer American consumers $7,500 tax credits if they buy electric vehicles through 2026. The following year, only purchases of electric vehicles made in the U.S. would qualify for the credits. The base credit would go up by $4,500 if the vehicle was made at a U.S. plant that operates under a union-negotiated collective bargaining agreement.

Canadian Deputy Prime Minister Chrystia Freeland on Wednesday called the incentive a clear violation of an updated trade agreement among the three countries that aimed to protect U.S. jobs and products made in North America.

The more delicate discussions were with Lopez Obrador. Mexico, long an underdog in the relationship with its neighbors, has earned considerable leverage in a year that saw a wave of pandemic-fueled migration from Latin America.

Biden has had to rely ever more on Mexico to keep the flow of people from overwhelming the southwestern border, and to house tens of thousands of migrants who might otherwise head north.

But Lopez Obrador appeared to reach a one-issue understanding with Trump: Mexico slowed the flow of Central American migrants trying to reach the U.S. border, and Trump often appeared to turn a blind eye to just about every other facet in the complicated relationship.

While the Mexican leader lavished praise on Trump when he was in office for not interfering in Mexican affairs, he has taken a more openly confrontational stance toward U.S. policies since Biden took office.

Just this week, Lopez Obrador skewered the U.S. embargo on Cuba as "vile" and attacked the Biden administration for helping to fund Mexican media groups that he described as "opposition publications." The president previously said American financing for Mexican civil society amounts to "promoting a coup mentality."

Lopez Obrador offered warm words for Biden when they appeared before the cameras Thursday. The two leaders discussed Mexico's relationship with the U.S. under Abraham Lincoln and Franklin D. Roosevelt before the portraits of both that Biden has displayed prominently in the Oval Office.

The Mexican president praised Biden for treating Mexico's government with respect, something he noted has not always been a given in the two countries' long history, and for including funding in his spending bill to overhaul the immigration system. But he also alluded to his desire to see the U.S. move quickly on temporary visas.

Lopez Obrador has mentioned on multiple occasions his interest in the U.S. government expanding its work visa program so more Mexicans and Central Americans can fill the demand for labor in the U.S. The temporary workers in turn could have access to the higher pay they seek in the U.S. without becoming part of the illegal immigration flow.

"Why not study the workforce demand and open the migratory flow in an orderly manner?" Lopez Obrador said.

Biden's dependence on Mexico has put the fate of a key piece of his domestic agenda in the hands of Lopez Obrador, who has lashed out at the United States and pursued policies that run counter to U.S. interests.

Lopez Obrador's government has sought to jail university professors, gutted funding for civic organizations, attacked journalists by name at national news conferences and championed a constitutional change that would ensure the dominance of the state-owned electricity giant in Mexico's energy market.

"They view Mexico as critically important to a number of their high-profile goals, the largest of which, of course, is immigration," said Roberta S. Jacobson, who previously served as ambassador to Mexico and spent four months as Biden's border coordinator. "But I think they equally view Mexico as, at best, an extremely complicated partner and at worst an unreliable one on the number of things they care about."

Thursday's meetings at the White House marked the first trilateral get-together for North American leaders since a June 2016 gathering of Trudeau, Barack Obama and Pena Nieto in Ottawa. The tradition of three-way meetings started when George W. Bush played host to Mexico's Vicente Fox and Canada's Paul Martin in 2005 at his ranch in Texas.

No accords are expected over ongoing disagreements over how each country has handled its trade commitments. Since Biden took office, the particulars of the Trump-era revision of the North American Free Trade Agreement, called the U.S.-Mexico-Canada Agreement, have been in dispute. The accord sought to update Mexico's labor laws, encourage more auto production in North America and open Canadian markets for U.S. dairy farmers.

Mexico's priorities heading into the summit were to obtain concrete advances on immigration and more equitable access to covid-19 vaccines.

The U.S. and Canada have expressed frustration that Lopez Obrador has failed to get on board with global efforts to curb climate emissions. The Mexican president skipped this month's U.N. climate summit in Glasgow, Scotland, and has accused elite nations of demonstrating "hypocrisy" when it comes to environmentalism.

Trudeau and Biden were also expected to discuss the future of an oil pipeline that crosses part of the Great Lakes and is the subject of rising tension over whether it should be shut down. Biden is caught in a battle over Enbridge's Line 5, a key segment of a pipeline network that carries Canadian oil across the U.S. Midwest.

Michigan Gov. Gretchen Whitmer, a Democrat and Biden ally, has demanded closure of the 68-year-old line because of the potential for a catastrophic rupture along a 4-mile section in the Straits of Mackinac, which connects Lake Huron and Lake Michigan. The Biden administration has not taken a position but is under increasing pressure to do so.

Canada last month invoked a 1977 treaty that guarantees the unimpeded transit of oil between the two nations.

"At the end of the day, getting back together will give the right impression," said Tony Payan, director of the Mexico Center at Rice University's Baker Institute for Public Policy. "The bad news is that the issues are many and thorny."

Information for this article was contributed by Aamer Madhani, Rob Gillies, Maria Verza and Colleen Long of The Associated Press; and by Katie Rogers and Natalie Kitroeff of The New York Times.