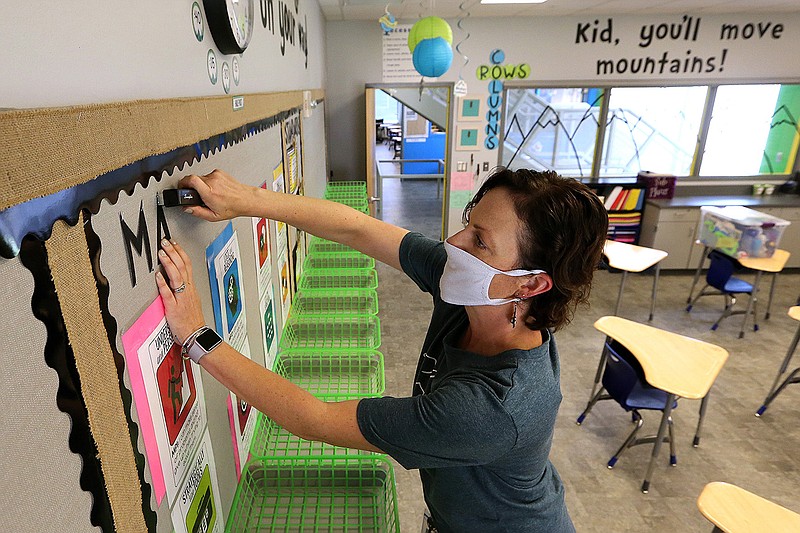 Third grade teacher Marla Edwards staples letters up on a bulletin board while preparing her classroom on Wednesday, Aug. 11, 2021, at Lakewood Elementary School in North Little Rock. (Arkansas Democrat-Gazette/Thomas Metthe)

Teachers in North Little Rock will have to continue to wait for a pay bump.

The North Little Rock School Board voted down a proposal from teachers Thursday night asking for a $4,000 pay raise. Members of the School Board said the vote is the beginning of a negotiation with teachers for a pay increase, and the board will come up with a counteroffer.

Representing teachers in North Little Rock, Carolyn Jackson, chair of the Licensed Personnel Policy Committee, argued the school district has fallen behind because of its comparatively low salaries, making it hard to recruit and retain teachers.

Jackson also noted rising inflation has hurt teachers and that they have gone a decade since their last pay increase that wasn't state-mandated, including a cost of living adjustment.

"We are losing teachers to other districts around us," Jackson said. "We are falling behind our competition -- competitive districts -- in being able to retain our teachers."

At the Thursday night School Board meeting, Jackson presented a plan that would have increased teachers' pay by $4,000 across the board, make adjustments in the pay schedule for teachers and increase time off.

Jackson said 2011 was the last year the school district approved a nonmandated increase in teachers' salaries.

"We are requesting the salary proposal -- the salary raise -- based on a long history of our teachers having done without the raise," Jackson said. "It's been well over 10 years since the last time teachers have received a raise."

School Board member J.T. Zakrzewski and other board members said they were sympathetic to giving teachers a pay raise, but said the costs of what had been proposed were too high.

In total, the pay increase would cost the school district around $4.4 million. Zakrzewski said the School Board will come up with a number to counter the teachers' offer as a measure of "good faith" negotiation, saying a pay bump is likely to come out of a compromise.

North Little Rock lags behind the state in teacher retention, with a turnover rate of 54% for the 2020-2021 school year compared with 17% statewide, according to the Arkansas Department of Education.

The poor retention rate has hurt the school district where some classrooms have no permanent teacher, Jackson said.

During a board meeting earlier this month, board member Angela Person-West pushed back on the teacher's proposed salary increase, saying pay should be tied to performance.

During the same meeting, board member Cindy Temple said teachers were leaving the school district, not because of pay but because of other issues.

"We've known we've had a problem for a long time," Temple said. "And I know for a fact that some of the teachers that left were excellent teachers and did not leave for money. They left for other reasons because we've had a mess down here in this school district for a long time."

"We all want to do the right thing, but we want to be fiscally responsible," Pilewski said.

Teachers also approved a proposed plan to give school staff pandemic pay. The proposal calls for giving each employee in the school district an extra $15.27 for every day they work on-site in the district.

Employees can earn the extra pay for up to 178 "student contact" days and will be funded by federal covid-19 stimulus funds.