Razorbacks pained by sprees of threes 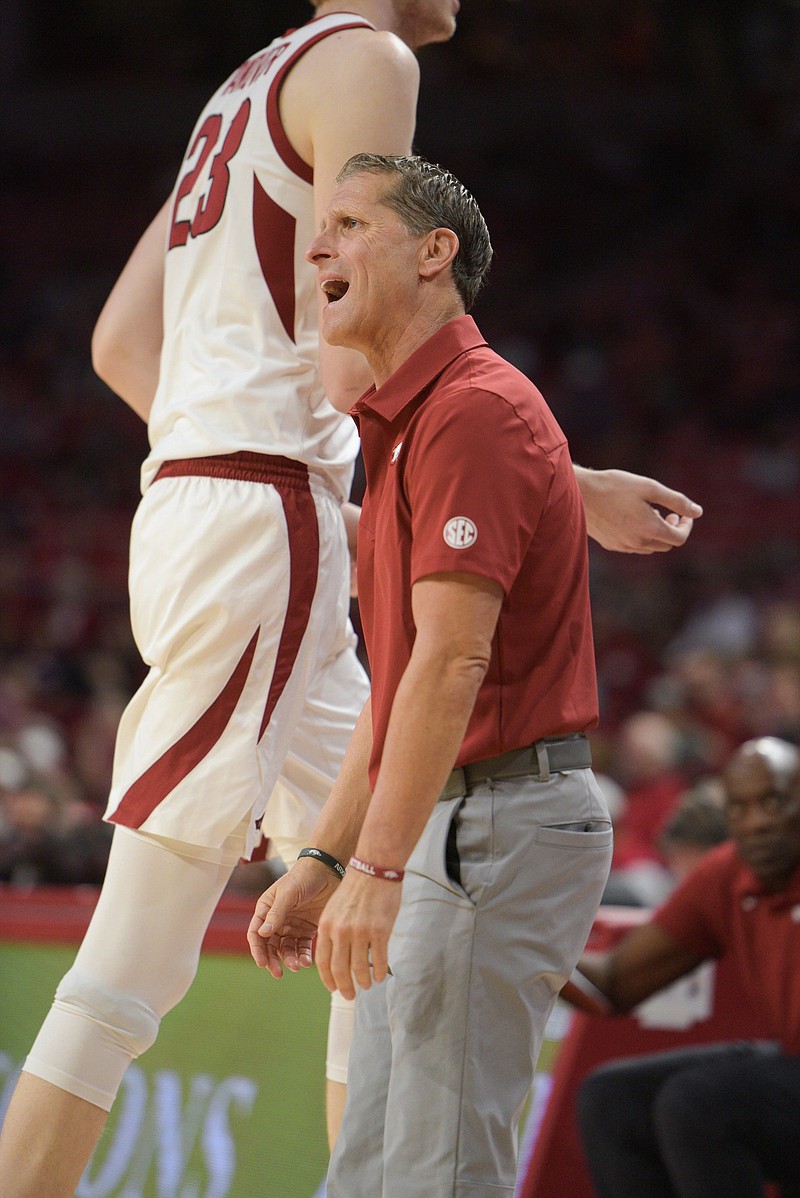 During Coach Eric Musselman’s first season at Arkansas, the Razorbacks led the nation defending against three-pointers. This season, they are one of the worst in the country. “We’re doing the same drills we did with the team that led the nation,” Musselman said. “This team is longer and should do a way better job of defending the three.” (NWA Democrat-Gazette/Hank Layton)

FAYETTEVILLE -- Northern Iowa let if fly from the start against the Arkansas Razorbacks.

The Panthers' first five baskets in Wednesday night's game at Walton Arena were three-pointers. By halftime, they had hit 9 of 17.

That exceeded Northern Iowa's 40-minute average of 7.7 made three-pointers in its first three games.

Northern Iowa matched the most three-pointers ever made by an Arkansas opponent according to Hogstats.com.

Against Nicholls State, Vermont and Dubuque, the Panthers shot 31.5% (23 of 73) on three-pointers.

"They hadn't shot the ball well before they met our defense," University of Arkansas Coach Eric Musselman said. "So our defense gave them confidence."

Northern Iowa still has the bulk of its team which matched a school record by hitting 20 three-pointers in 39 attempts in an 87-83 loss to Western Kentucky to open last season.

Six Panthers hit at least one three-pointer on Wednesday night, led by senior guard Trae Berhow going 7 of 11 and Green -- a junior guard -- 4 of 13.

"Our roster is built that way," Northern Iowa Coach Ben Jacobson said. "We have guys that can really shoot the basketball."

Mercer, Gardner-Webb and Northern Iowa have combined to hit 43 of 99 three-pointers against Arkansas compared to 46 of 158 (29.1%) against their other opponents.

"I can promise you that defending the three was part of the game plan coming in," Musselman said Wednesday night. "We seem to have solved most of the issues that have come up through a small, three-game sample size. We have not solved defending the three-point line."

"They've got some good shooters," Umude said. "At the same time, we've got to lock in more on our game plan and execute and not let them shoot threes."

Senior guard Chris Lykes, who led the Razorbacks with 26 points off the bench, said the Panthers did a good job of ball movement.

"They moved it side to side, and that opens up the floor a little," Lykes said. "Even so, I thought we were there.

"But it's something we've got to focus on. The coaches are making us aware of that. We should get better."

Musselman was particularly upset that Gardner-Webb hit 10 of 18 three-pointers in the second half.

"I mean, I could have hit three or four the way we defended the last eight minutes," Musselman said. "If you give me a 'Horse' shot, a wide-open one with my feet set, I'm pretty sure at 56 or whatever I am, I could hit a couple."

Musselman tweeted on Thursday that of the 43 three-pointers against the Razorbacks, 10 were made with at last one dribble while 33 were on catch-and-shoot plays and only seven were made after what he called bad passes.

"Importance of good ball pressure," Musselman added in a tweet.

In 2019-20, Musselman's first season at Arkansas, the Razorbacks led the nation in three-point defense by holding opponents to 27.2%.

"The one area which we have not bought in, which is all on me, is defending the three," Musselman said after the Gardner-Webb game. "It's the most bothersome thing in a short sample size since I've been coaching college basketball.

"We're doing the same drills we did with the team that led the nation. This team is longer and should do a way better job of defending the three.

"So that will be addressed leading up to our next game. Where it ends up, I don't know."

It didn't end up where Musselman and the Razorbacks wanted against Northern Iowa.

Arkansas' next game is against Kansas State (2-0) on Monday night in Kansas City, Mo., in the Hall of Fame Classic.

NO. 16 ARKANSAS VS. KANSAS STATE

WHEN 8 p.m. Central on Monday

Arkansas’ men’s basketball team has been vulnerable to giving up three-pointers in its first three games as opponents have hit 43.4% against the Razorbacks compared to 29.1% against other teams they have played:

TEAM VS. ARK. VS. OTHERS