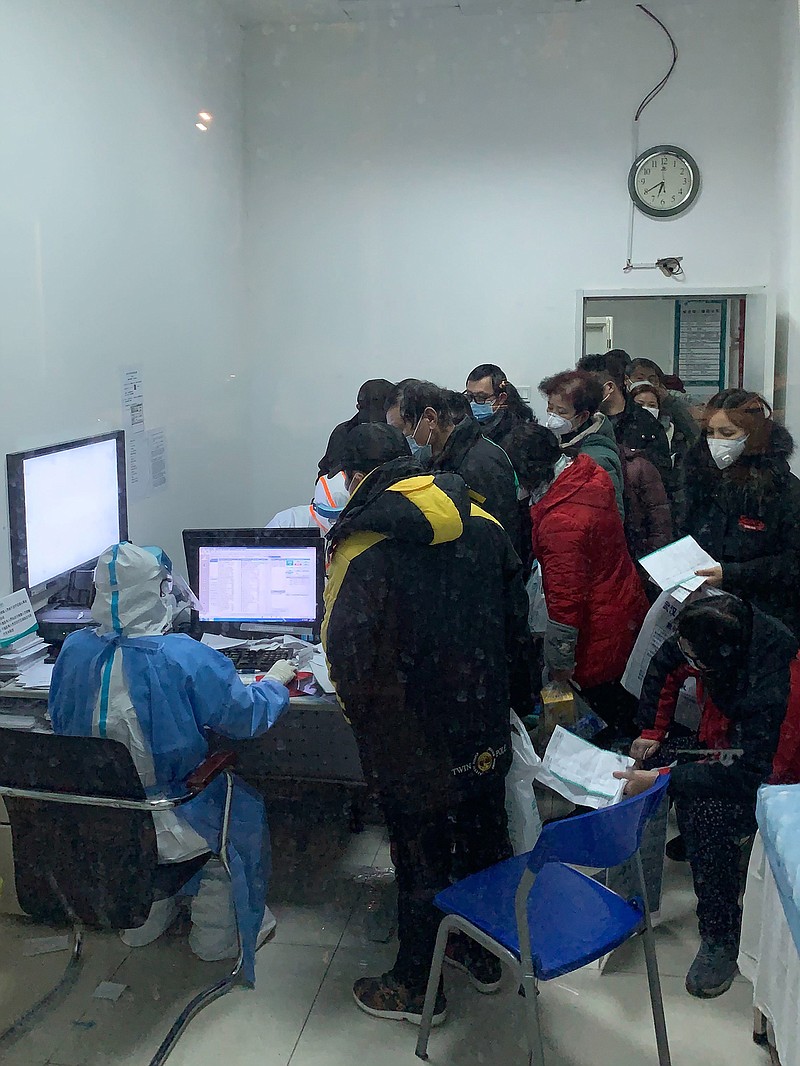 People stand at a health care worker’s desk while waiting for medical attention at a hospital in Wuhan, China, on Jan. 28, 2020. (The New York Times/Chris Buckley)

A scientist who has pored over public accounts of early covid-19 cases in China reported Thursday that an influential World Health Organization inquiry had likely gotten the early chronology of the pandemic wrong. The new analysis suggests that the first known patient sickened with the coronavirus was a vendor in a large Wuhan animal market, not an accountant who lived many miles from it.

The report, published Thursday in the prestigious journal Science, will revive the debate over whether the pandemic started with a spillover from wildlife sold at the market, a leak from a Wuhan virology lab or some other way. The search for the origins of the greatest public health catastrophe in a century has fueled geopolitical battles, with few new facts emerging in recent months to resolve the question.

The scientist, Michael Worobey, a leading expert in tracing the evolution of viruses at the University of Arizona, came upon timeline discrepancies by combing through what had already been made public in medical journals, as well as video interviews in a Chinese news outlet with people believed to have the first two documented infections.

Worobey argues that the vendor's ties to the Huanan Seafood Wholesale Market, as well as a new analysis of the earliest hospitalized patients' connections to the market, strongly suggest that the pandemic began there.

"In this city of 11 million people, half of the early cases are linked to a place that's the size of a soccer field," Worobey said. "It becomes very difficult to explain that pattern if the outbreak didn't start at the market."

Several experts, including one of the pandemic investigators chosen by the WHO, said Worobey's detective work was sound and that the first known case of covid was most likely a seafood vendor. But some of them also said the evidence was still insufficient to decisively settle the larger question of how the pandemic began.

"I don't disagree with the analysis," said Jesse Bloom, a virus expert at the Fred Hutchinson Cancer Research Center. "But I don't agree that any of the data are strong enough or complete enough to say anything very confidently, other than that the Huanan Seafood Market was clearly a superspreading event."

Bloom also noted that this was not the first time the WHO report, done in collaboration with Chinese researchers, was found to contain mistakes, including errors involving early patients' potential links to the market.

"It's just kind of mind-boggling that in all of these cases, there keep being inconsistencies about when this happened," he said.

Toward the end of December 2019, doctors at several Wuhan hospitals noticed mysterious cases of pneumonia arising in people who worked at the Huanan Seafood Wholesale Market, a dank and poorly ventilated space where seafood, poultry, meat and wild animals were sold. On Dec. 30, public health officials told hospitals to report any new cases linked to the market.

Fearing a replay of severe acute respiratory syndrome, which emerged from Chinese animal markets in 2002, Chinese officials ordered the Huanan market closed, and Wuhan police officers shut it down on Jan. 1, 2020. Despite those measures, new cases multiplied through Wuhan.

On Jan. 11, 2020, Wuhan authorities said cases had begun on Dec. 8. In February, they identified the earliest patient as a Wuhan resident with the surname Chen, who fell sick on Dec. 8 and had no link to the market.

Chinese officials and some outside experts suspected that the initially high percentage of cases linked to the market might have been a statistical fluke known as ascertainment bias. They reasoned that the Dec. 30 call from officials to report market-linked illnesses may have led doctors to overlook other cases with no such ties.

"At the beginning, we presumed that the seafood market may have the novel coronavirus," Gao Fu, director of China's Centers for Disease Control and Prevention, said in May 2020, according to China Global Television Network. "But it now turns out that the market is one of the victims."

By the spring of 2020, senior members of the Trump administration were promoting another scenario for the origin of the pandemic: that the virus had escaped from the Wuhan Institute of Virology, which has a campus roughly 8 miles away from the Huanan market, across the Yangtze River.

In January 2021, researchers chosen by the WHO visited China and interviewed an accountant who had reportedly developed symptoms on Dec. 8. Their influential March 2021 report described him as the first known case.

But Peter Daszak, a disease ecologist at EcoHealth Alliance who was part of the WHO team, said that he was convinced by Worobey's analysis that they had been wrong.

"That December the 8th date was a mistake," Daszak said.

The WHO team never asked the accountant the date his symptoms began, he said. Instead, they were given the Dec. 8 date by doctors from Hubei Xinhua Hospital, who handled other early cases but did not care for Chen.

"So the mistake lies there," Daszak said.

For the WHO experts, Daszak said, the interview was a dead end: The accountant had no apparent links to an animal market, lab or a mass gathering. He told them he liked spending time on the internet and jogging, and he did not travel much.

"He was as vanilla as you could get," Daszak said.

Had the team identified the seafood vendor as the first known case, Daszak said, it would have more aggressively pursued questions like what stall she worked in and where her products came from.

This year, Daszak has been one of the strongest critics of the lab-leak theory. He and his organization, EcoHealth Alliance, have taken heat for research collaborations with the Wuhan Institute of Virology.

Last month, the National Institutes of Health said EcoHealth was in breach of the terms and conditions of its grant for research on coronaviruses in bats.

While the doctors at Hubei Xinhua Hospital said the onset of the accountant's illness had been Dec. 8, a senior doctor at Wuhan Central Hospital, where Chen was treated, had told a Chinese news outlet that he developed symptoms around Dec. 16.

Asked about Chen's case, China's National Health Commission said it stood by comments made by Liang Wannian, the leader of the Chinese side of the WHO-China investigation who led the interview with the Hubei Xinhua Hospital doctors. Liang told a news conference in February of this year that the earliest covid case showed symptoms on Dec. 8 and was "not connected" to the Huanan market.

In their report, the WHO experts concluded that the virus most likely spread to people from an animal spillover, but they could not confirm that the Huanan market was the source. By contrast, they said that a lab leak was "extremely unlikely."

The report has come under fire for several errors and shortcomings. The Washington Post revealed in July that the report listed the wrong viral samples for several early patients -- including the first official case -- and mistakenly linked the first family cluster of cases to the Huanan market.

The WHO promised to fix the errors, but they remain in the report on the organization's website. The organization said that it would ask the report's authors if and how they would correct the mistakes.

In May, two months after the report by the WHO and China was published, 18 prominent scientists, including Worobey, responded with a letter in Science complaining that the WHO team had given the lab-leak theory short shrift. Far more research was required, they argued, to determine whether one explanation was more likely than the other.

An expert on the origins of influenza and HIV, Worobey has tried to piece together the early days of the covid pandemic.

Reading a May 2020 study of early cases written by local doctors and health officials in Wuhan, he was puzzled to see a description that seemed like Chen: a 41-year-old man with no contact with the Huanan market. But the study's authors dated his symptoms to Dec. 16, not Dec. 8.

Then Worobey found what appeared to be a second, independent source for the later date: Chen himself.

"I got a fever on the 16th, during the day," a man identified as Chen said in a March 2020 video interview with The Paper, a publication based in Shanghai. The video indicates that Chen is a 41-year-old who worked in a company's finance office and never went to the Huanan market. Official reports said that he lived in the Wuchang district in Wuhan, miles from the market.

The New York Times was not able to independently confirm the identity of the man in the video.

Along with his fever on Dec. 16, Chen said he felt a tightness in his chest and went to the hospital that day. "Even without any strenuous exercise, with just a tiny bit of effort, like the way I'm speaking with you now, I'd feel short of breath," he said.

Worobey said that the medical records shown in the video might hold clues to how the WHO-China report wound up with the wrong date.

One page described surgery Chen needed to have teeth removed. Another was a Dec. 9 prescription for antibiotics referring to a fever from the day before -- possibly the day of the dental surgery.

On the video, Chen speculated that he might have gotten covid "when I went to the hospital" -- possibly a reference to his earlier dental surgery.

The Washington Post noted in July that the details provided by the WHO for the Dec. 8 case seemed to fit better with an entry from an online database of viral samples linked to someone who got sick on Dec. 16. In response, the WHO had said it was looking into the discrepancy.

An agency spokesperson told The New York Times it would be "difficult to comment" on the first known case because the WHO team had limited access to health data. He said it was important for investigators to keep looking for patients infected even earlier.

In Worobey's revised chronology, the earliest case is not Chen but the seafood vendor, a woman named Wei Guixian, who developed symptoms around Dec. 11. Wei said in the same video published by The Paper that her serious symptoms began Dec. 11, and she told The Wall Street Journal that she began feeling sick on Dec. 10. The WHO-China report listed a Dec. 11 case linked to the market.

Worobey found that hospitals reported more than a dozen likely cases before Dec. 30, the day Wuhan authorities alerted doctors to be on the lookout for ties to the market.

He determined that Wuhan Central Hospital and Hubei Xinhua Hospital each recognized seven cases of unexplained pneumonia before Dec. 30 that would be confirmed as covid-19. At each hospital, four out of seven cases were linked to the market.

By focusing on just these cases, Worobey argued, he could rule out the possibility that ascertainment bias skewed the results in favor of the market.

Still, other scientists said it's far from certain that the pandemic began at the market.

"He has done an excellent job of reconstructing what he can from the available data, and it's as reasonable a hypothesis as any," said Dr. W. Ian Lipkin, a virus expert at the Mailman School of Public Health at Columbia University. "But I don't think we're ever going to know what's going on, because it's two years ago and it's still murky."

Alina Chan, a postdoctoral fellow at the Broad Institute in Cambridge, Massachusetts, and one of the most vocal proponents of investigating a lab leak, said that only new details about earlier cases -- going back to November -- would help scientists trace the origin.

"The main issue this points out," she said, "is that there's a lack of access to data, and there are errors in the WHO-China report."