Super-senior success: Hogs benefit from those with extra year 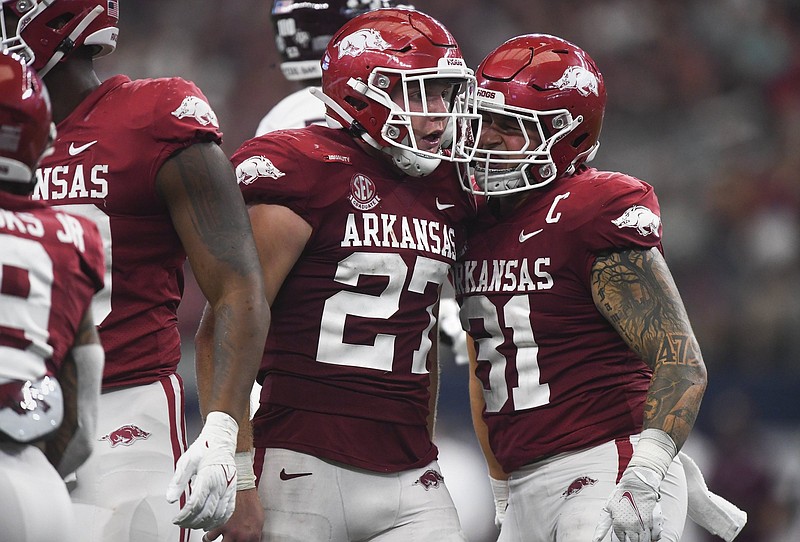 Linebackers Hayden Henry (27) and Grant Morgan (31) are among several Arkansas players who were allowed to return this season because of the NCAA’s relaxed eligibility regulations because of the covid-19 pandemic and have had an impact during the Razorbacks’ resurgence. (NWA Democrat-Gazette/Charlie Kaijo)

FAYETTEVILLE -- Sam Pittman's recruiting for the University of Arkansas this fall and winter will extend well beyond incoming freshman, junior college and transfer portal players.

With the NCAA's relaxed regulations regarding eligibility due to the covid-19 pandemic, Pittman has also eagerly begun the process of trying to re-recruit some of the Razorbacks' top seniors with eligibility remaining to return in 2022.

Pittman indicated on Wednesday there might already be seniors ready and willing to play another season for the Razorbacks, but he wasn't prepared to name names.

"Not that I want to share right now," Pittman said. "I think there will be a place and time for that, but certainly there's a possibility that we could get some of our guys back. It sure has helped our team this year."

Ridgeway, a graduate transfer from Illinois State, has already been invited to the Senior Bowl, which Pittman recognized on Wednesday.

"We'd like for him to come back," Pittman said. "We think he can increase his draft status, but that's between Ridge and I and we'll figure it out. But that's certainly a great honor, especially for a guy who came from a I-AA school to reach his dreams, and certainly proud of him."

All players who were on rosters of NCAA programs during the 2020-21 school year are eligible for the bonus year, which Pittman has taken to calling "super seniors" for the huge group of Razorbacks who took advantage of it this year.

There's no denying those super seniors have played a huge role in the Razorbacks' 7-3 start, which includes a spot in every national poll with two games remaining in the regular season.

It would be hard to picture the Razorbacks (3-3 SEC) in this position without the contributions of a large group of players given an extra year of eligibility. The stars of that group include linebackers Grant Morgan and Hayden Henry, offensive linemen Myron Cunningham and Ty Clary, receivers Tyson Morris and De'Vion Warren and tight end Blake Kern. Several other Razorbacks, including Dorian Gerald, an injured would-be starter at defensive end, also returned.

Multiple SEC coaches, including Georgia's Kirby Smart and Mississippi State's Mike Leach, referenced the huge number of Arkansas seniors and the experience factor that provided for the Razorbacks.

It won't be as easy for football staffs to extend bonus seasons as the covid classes come up through programs across the country the next few years.

"Last year there was an NCAA exemption to allow seniors to return for a 'super senior/covid senior' season to be exempt from the scholarship limits," Fagg said. "But beginning next year, we go back to scholarship limits, and you have to incorporate anybody using an extra year of eligibility into the overall counter limit of 85."

Pittman recognized there will have to be a balancing act keeping track of incoming talent, welcoming back super seniors and working the transfer portal again.

"Moving forward, it does. So you might be a little more selective of who you ask to come back, because basically you're saying, 'Is he worth a freshman coming in or a portal spot coming in, to ask him to come back?' So it's changed a little bit because it counts toward your 85."

A couple of factors could be influential on decisions made by Arkansas' current seniors with eligibility remaining: the success of the current super seniors; and name, image and likeness legislation passed during the last year which allows players to profit from sponsorships.

Morgan has had one of the most lucrative seasons regarding sponsors, sources inside the UA athletic department say, and the group of seniors with eligibility remaining could follow suit.

Pittman said he would definitely point out the success of the bonus-year seniors in his recruiting efforts.

"We'll certainly use it and it's not only about draft status and improving their stock. It's about what they've done thus far for the University of Arkansas and the feelings they'll have life long," Pittman said.

"Yeah, I think we'll certainly use that and we may have some of those super seniors talk to our seniors on our team now and explain why they chose to come back and what the benefits are and possibly if there wasn't a benefit to talk to them about that. We just want to be truthful with our kids."

Pittman added NIL could be a big part of the attraction for players to remain in school.

"I think NIL has changed the possibilities of guys staying or leaving," Pittman said. "I think it's certainly helped." 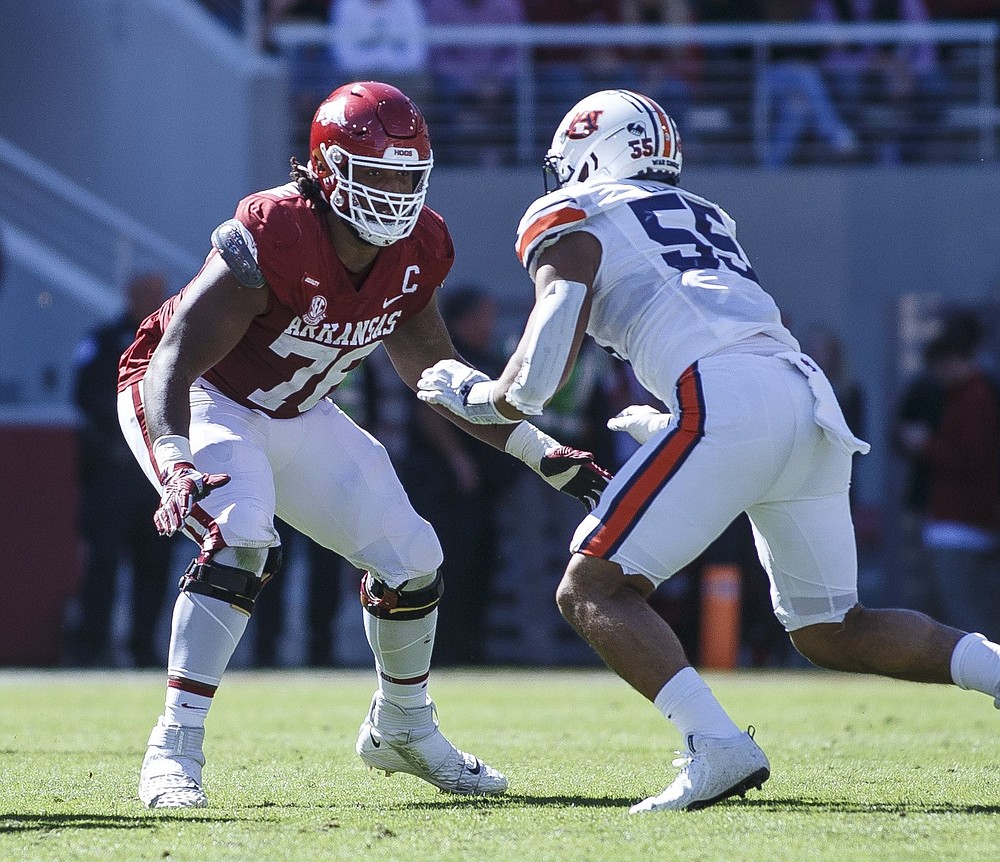 Arkansas offensive tackle Myron Cunningham is a part of large group of players who elected to take an extra year of eligibility and stay another with the Razorbacks. (Special to the NWA Democrat-Gazette/David Beach)