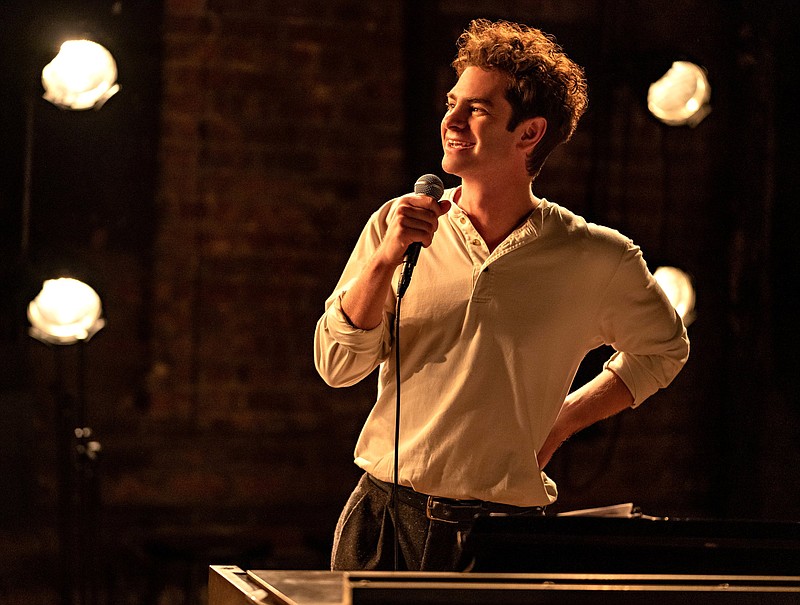 Rating: PG-13, for some strong language, some suggestive material and drug references

These days there is an inescapable buzz that surrounds anything with Lin-Manuel Miranda's name attached to it. The mastermind behind the stage musical and cultural phenomenon "Hamilton" has been venturing more and more into the world of film -- producing, voice acting, and writing music for several recent movies. Now Miranda steps behind the camera for the first time to tell the story of a Broadway star-to-be who never had the opportunity to see his dream realized.

Jonathan Larson's "Rent" was an influential stage production that inspired a generation of theater playwrights and performers. "Rent" played on Broadway for 12 years and grossed more than $280 million. Tragically, Larson never saw its success. He died Jan. 25, 1996, of an aortic dissection, the very day of the play's first Off-Broadway preview performance. He was only 35 years old. He would go on to win three posthumous Tony Awards and a Pulitzer Prize for Drama.

Among those influenced and driven by Larson's work was Lin-Manuel Miranda. His new film "Tick, Tick...Boom!" plays as a tribute to Larson's legacy as well as a celebration of New York City theater. The script is by Steven Levenson, a Tony Award winner himself who also wrote the screenplay for the woeful film adaptation of "Dear Evan Hansen." Despite having issues of its own, this is an uneven yet considerably better effort -- one that leans heavily on the film's charismatic lead actor.

The glue that holds "Tick, Tick...Boom!" together is Andrew Garfield who plays Jonathan Larson with an unbridled commitment. Garfield pours his heart and soul into the role, acting and singing with an infectious enthusiasm. He paints a fascinating portrait of Larson with his unruly crop of hair, manic energy, and an obsessive drive. It's an impressive performance that does a good job articulating the struggle to be successful while creating something meaningful. It also highlights the personal costs that come with an all-consuming single-minded vision.

"Tick, Tick...Boom!" was the name of Larson's autobiographical production that preceded his smash hit "Rent." The one-man "rock monologue" mixed music, lyrics and spoken word to tell the origin story of the composer and playwright's first major stage project -- an ambitious futuristic rock musical called "Superbia." This isn't easy material to adapt and to Miranda's credit he takes no shortcuts. Instead, he and Levenson do some crafty tweaking, reorganizing the one-man show into a three-person chamber piece similar to the ones performed on stage since Larson's death. The difference is Larson himself (through Garfield's performance) leads the film's three-person gig.

Miranda's imagining of a Larson-led stage performance of "Tick, Tick...Boom!" is a good framing device that opens up the broader story. His film cuts back-and-forth between the singing of Larson's songs on stage and the moments from his past that inspired them. These scenes take us back to 1990 where the Larson we meet is bursting with confidence yet burdened with an eerily prophetic sense that he's running out of time. With his 30th birthday only days away, he feverishly works to complete "Superbia" as if it were his last shot at fame.

Self-described as "one of the last of my species," Larson lives out of a cramped apartment where he spends his time jotting down ideas and pecking away on an old Macintosh. When not waiting tables at the Moondance Diner in Soho, he hangs out with an eclectic bohemian blend of aspiring artists and art lovers. Some, like his girlfriend Susan (Alexandra Shipp) and his childhood friend/roommate Michael (Robin de Jesus) are abandoning their dreams of performing. But Larson's rabid desire to succeed won't allow him to quit, even if it hurts his relationships with those closest to him.

As far as the music, Miranda wisely sticks with Larson's own songs, which often convey more feeling than the movie's dialogue. As with any musical, some tunes are better than others. The rousing "Louder Than Words," the cameo-filled "Sunday," and the catchy "Boho Days" stand out most. And while I wouldn't say Garfield has a great voice, he certainly manages the songs well enough, performing them with such spirit and verve.

Miranda's structure is certainly audacious, but it leads to some of the film's nagging problems. Most notably, its frenetic pace. The movie never slows down long enough to let us see beyond Larson's creative zeal. By the end there's still so much about him that we don't know. Also, not all of Miranda's choices make sense. Take the decision to intercut one of the few dramatic scenes with the movie's most comically upbeat musical number ("Therapy"). It's a case where I'm sure it sounded good on paper, but the style-first approach ends up shortchanging two really good bits.

Overall, "Tick, Tick...Boom!" is more of a biographical sketch laced with catchy tunes than an actual exploration into the man who was Jonathan Larson. Miranda's admiration for his subject is never in doubt, and he makes honoring Larson's artistry his chief focus. In the process, Miranda leans a little too heavily on stylish flourishes. And while the film is full of emotion, there's very little drama. But a magnetic Garfield elevates and carries the entire film. This is without question his movie, and he gives the kind of spellbinding portrayal that makes it a lot easier to look past the film's shortcomings.