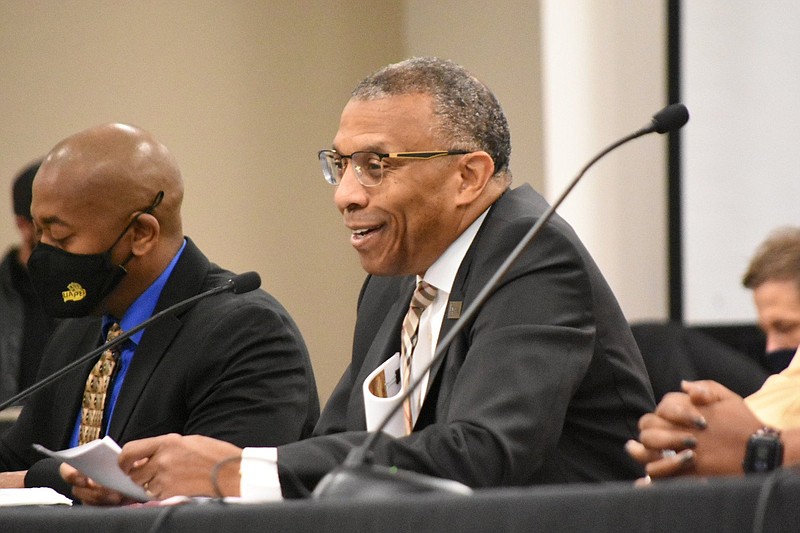 UAPB Chancellor Laurence B. Alexander presents plans Thursday for upgrades to the campus’ student center to the University of Arkansas System board of trustees at the UAPBSTEM building. (Pine Bluff Commercial/I.C. Murrell)

A new student engagement center and interior renovations to the L.A. Davis Sr. Student Union could soon come to the University of Arkansas at Pine Bluff.

School Chancellor Laurence B. Alexander, along with designers from AMR Architects, shared with the University of Arkansas System board of trustees on Thursday renderings of the proposed center and improvements to the Student Union, which first opened in 1951. The presentation was not an action item on the board's agenda, but if approved later, the total price tag for both projects would be approximately $30 million, AMR architect Jonathan Opitz estimated.

"I checked back in 1951, [and] our enrollment was just under 1,000 at the time. Over time, the building has been fairly well maintained," Alexander said of the Student Union. "It's gotten some renovation projects, but simply we have outgrown our Student Union. It isn't what I would define as a 21st-century student union that serves the needs of our students, like many of our campuses around the country and around the state."

University officials, Opitz said, hope to break ground on the student engagement center, which would be located on the north end of the campus, by the first quarter of 2022, dependent on when the board approves the contractor for the project. When that vote might take place is not clear.

"It was important for us to connect this building to the rest of campus," AMR architect Adam Day told board members. "This idea, this concept of a promenade connecting north and south is what's driven a lot of the design of the building."

The architects named among the planned improvements to the Student Union improved daylight entry into the lobby space, the addition of an elevator to the second floor to make the building fully accessible, turning an old ballroom into a new bookstore and including open student collaboration spaces.

"This is a continuation of the legacy of L.A. Davis where it was a cutting-edge building at the time," Opitz said. "It was transformational on campus. This is an opportunity to do that again for this generation."

Alexander said a master plan for new construction and renovations to existing buildings was brought before the board in 2015, two years into his time as chancellor. Trustees approved a $10 per credit hour increase to pay for a new student center following Alexander's request in 2017.

"We're getting to the end of the long list of the highest-priority projects," Alexander said. "This is one of them. We have a track and soccer stadium that's coming along, too; that's one of them as well."

The projects are not meant to replace the three buildings that have been knocked offline due to the February snowstorms and resulting water-pressure issues across Pine Bluff, Alexander said. The plan is to bring the Hathaway-Howard Fine Arts Center, Henderson-Young Business building and Corbin Hall back to operational "as quickly as possible," he added.

"Our efforts in that regard have been delayed, mostly by a supply chain problem that is worldwide in essence, so we've hired the firm of CDI Contractors with getting the materials that are needed to really get all those buildings back online," Alexander said. "We were hit in early 2021 with an early 100-year snowstorm. That followed with the loss of water pressure that was city-wide, and it really caused severe damage, cataclysmic damage, to the power systems in those buildings, such that they had to be rebuilt. It is the rebuilding of the power systems that is necessary for getting those buildings back online safely."

Offices and classrooms in the now-offline buildings have been relocated to other buildings on campus.

Before seeing the new student center and Student Union plans, the System Board approved Cromwell Architects to do the design for renovations to Hazzard Gymnasium, which is now home to the Reserve Officers' Training Corps.

The $2.1 million first phase includes project design, removal and replacement of asbestos siding, replacement of insulation, installation of a new roof, gutters, windows, exterior door, soffits and a heating, ventilation and air conditioning unit. A grant from the Arkansas Natural and Cultural Resources Council will cover the cost of the phase.

The gym was built in approximately 1951 according to Alexander, who added: "It is a building that is greatly in need of repair."

"This is an exciting time, especially for a graduate of the University of Arkansas at Pine Bluff," said Board Chairman Stephen Broughton, a Pine Bluff psychiatrist and UAPB graduate.

"I ran through these halls as a child and I remember going into the student union, riding my bike over into campus when I was 10 years old to go upstairs and the college kids would show me how to shoot pool," he said, eliciting laughs during Thursday's meeting. "Oh, you better believe it. Some of the best stuff I ever had." 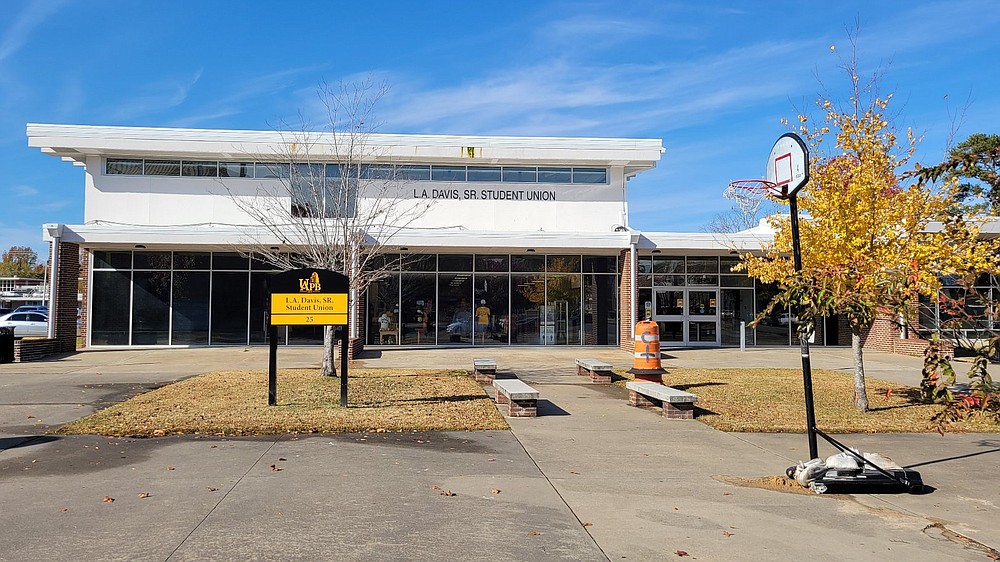 The L.A. Davis Student Union at UAPB, originally built in 1951, is being considered for renovations. An architect said that the suggested concept would cost approximatley $30 million. (Pine Bluff Commercial/I.C. Murrell) 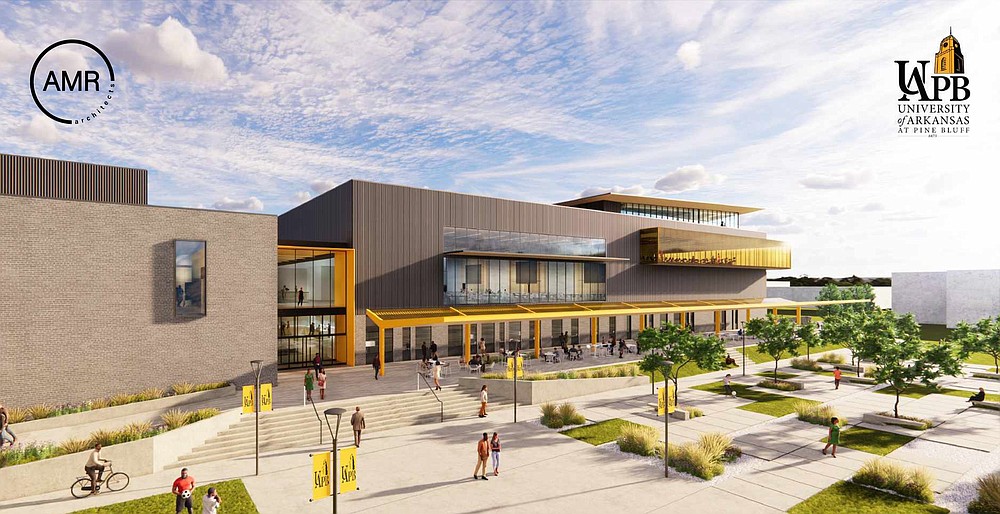 An architectural illustration by AMR Architects offers a vision of the proposed Student Engagement Center at UAPB. Upgrades in the plan would add a performing arts center and the conversion of an old ballroom into a new bookstore among other things. (Special to The Commercial/AMR Architects) 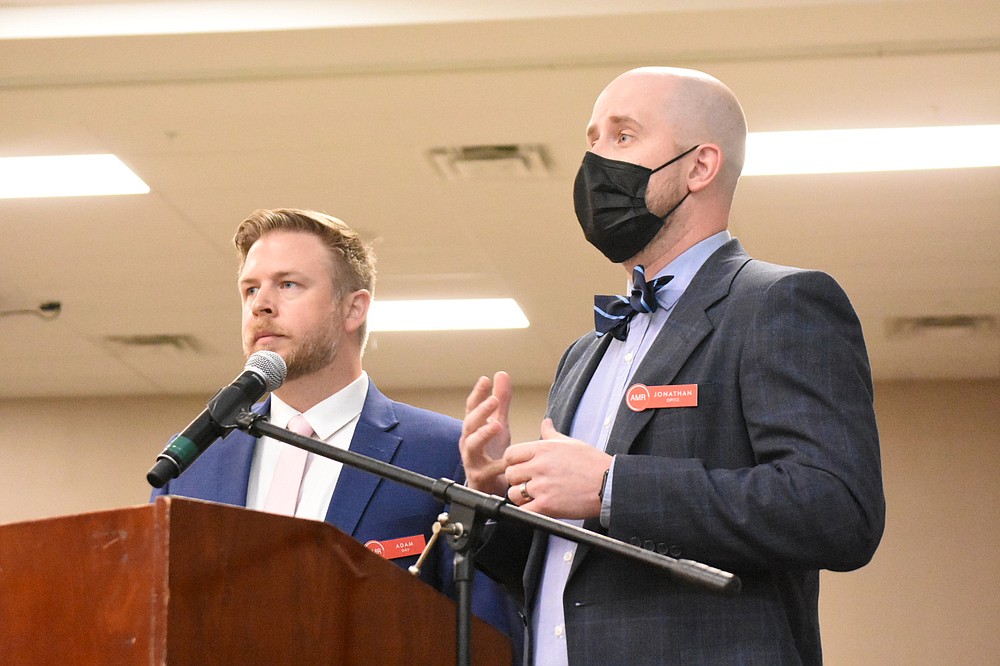 Adam Day, left, and Jonathan Opitz of AMR Architects discuss the floor plans and renderings related to proposed student center upgrades to the University of Arkansas System Board of Trustees on Thursday, Nov. 18, 2021, at the UAPB STEM building. (Pine Bluff Commercial/I.C. Murrell)
ADVERTISEMENT