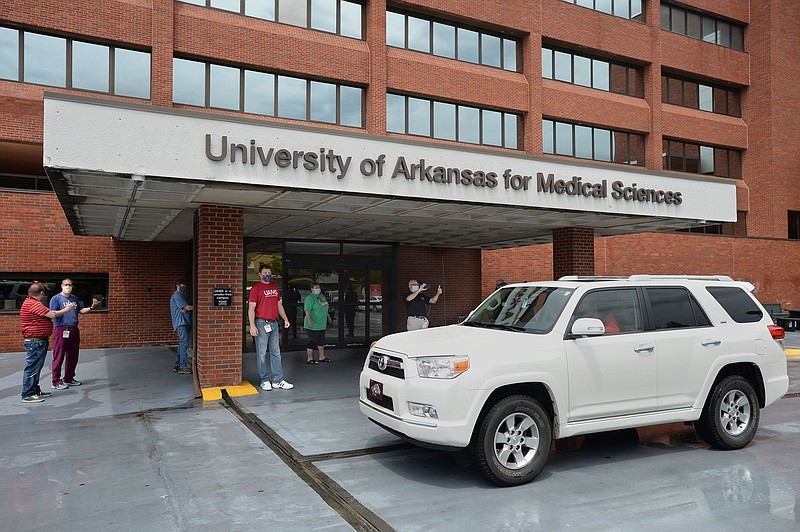 A vehicle drives Friday, May 22, 2020, past the University of Arkansas for Medical Sciences Northwest entrance to honor healthcare workers during the Horns for Heroes event at the medical center campus in Fayetteville. (NWA Democrat-Gazette/Andy Shupe)

The University of Arkansas for Medical Sciences will acquire 48 acres of land near Interstate 49 in Rogers as part of a deal approved by trustees Thursday that continues the health care provider's expansion into the region.

"We see this as, I think, a 20-year opportunity for development," UAMS Chancellor Cam Patterson said Thursday at a meeting of the University of Arkansas board of trustees.

Recently, the 10-member trustees board for the UA System has approved multiple UAMS projects in the Northwest Arkansas region, including a planned orthopedic and sports medicine center near I-49 in Springdale.

But Patterson said UAMS has no specific plans for the new land to be acquired in Rogers.

"We will need to do a master plan for the development of this property. That has not been done," Patterson said.

UAMS will pay $8 million for a portion of land as part of the deal approved by trustees Thursday, which also involves accepting another portion of the land as a gift, said Christina Clark, UAMS' vice chancellor for institutional support services and chief operating officer, at the meeting held at the University of Arkansas at Pine Bluff.

The seller is the Donald G. Mills Revocable Trust, according to board documents.

The money to buy the land -- considered three separate tracts -- will come from a bond issue previously approved by the trustees board in September, according to board documents.

In addition to the 48 acres, the university will receive about 4 acres of property as a gift from Donald G. Mills, LLC; Joe Mills, LLC; Doug Mills, LLC and Mike Mills, LLC, with this acreage described as providing an entrance to the main site from West Pleasant Grove Road.

Before the board approved the deal, Ed Fryar, a poultry entrepreneur and trustees board member, said that while the landowners were seeking to complete the deal by the end of the year "for tax purposes," he wanted "a little more information."

Specifically, Fryar referred to divergent appraisals of the land.

Clark told trustees that one appraisal put the land's value at $20.9 million, while another appraisal estimates its worth as approximately $10 million.

"I'd like to have a little bit of time to review the appraisals," Fryar said. He noted that UAMS would not be making money by owning the land.

"There will be costs associated with holding the property," Fryar said.

But other trustees spoke in favor of the deal, and when it came to a vote no trustees opposed it.

Patterson and Clark noted that UAMS spends about $1.7 million annually to lease space for research, clinical and educational operations in Northwest Arkansas.

"We're putting in over a million dollars a year to just to maintain that facility at a level for clinical purposes --" began Patterson, using a term "clinical" that most often refers to patient care services.

"Which we don't own," interjected Ted Dickey, an investment fund manager and trustees board member.

The UA System board met at the University of Arkansas at Pine Bluff.