'Zeros and Ones': Poorly lit, unintelligible 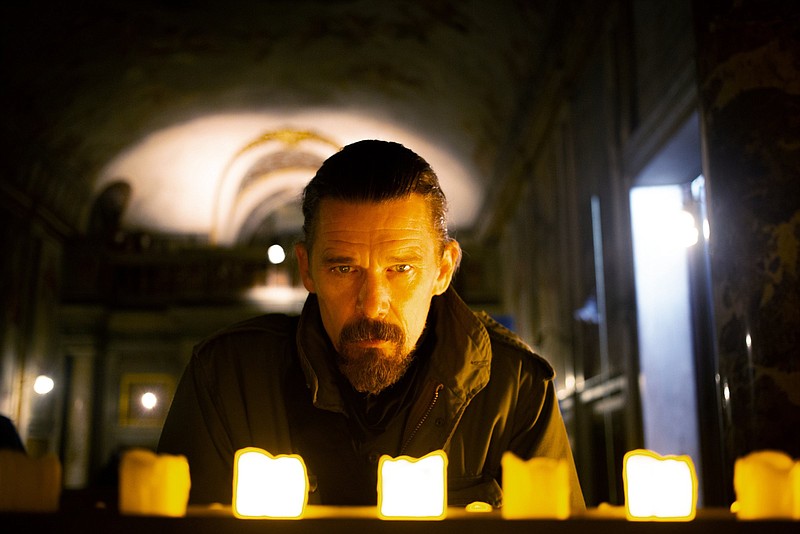 In the pandemic-set “Zeros and Ones,” Ethan Hawke plays a dual role as a lone soldier seeking terrorists in Rome and his radicalized, imprisoned brother.

I like Ethan Hawke. He's the star of my favorite vampire film, "Daybreakers," and he's a good actor. But after watching him stumble around Italy doing his worst Christian Bale Batman impersonation for 90 minutes, I'm left wondering about his choices in movie projects.

Lionsgate was kind enough to provide a review copy of "Zeros and Ones" for me, and while I feel bad for the following 800 words or so I'm about to write describing how it's one of the worst films I've ever reviewed, sometimes critics have to be ... well, critical. If I suddenly stopped being critical, Philip Martin probably wouldn't allow me to remain in his film section anymore.

Typically, in a film review, a writer will lay out the movie's summary without giving away any spoilers. There's just one problem here. I don't have any clue what I watched. I think back to my harshest reviews in this newspaper, either "Monday" or "Artemis Fowl," and in both of those movies, I at least had some hint about what I was seeing unfold on my TV screen.

But the story in "Zeros and Ones" is unintelligible to me. I was 100% lost for the entire film. And not "lost" like I didn't understand time travel mechanics in a Christopher Nolan film. I mean utterly lost, wandering around in the dark without a clue as to my destination, much like Hawke seemed to be in this movie.

Here's the summary that came with my digital review copy of the movie: "An American soldier stationed in Rome with the Vatican blown up, embarks on a hero's journey to uncover and defend against an unknown enemy threatening the entire world."

That sounds like an exciting premise, no? It was certainly an exciting plot for Dan Brown's "Angels and Demons" novel. But I was watching scene after scene of "Zeros and Ones" utterly confused. There was nothing resembling a plot or any real characters. I don't even think I remember a single name used in the film.

Maybe other critics will be able to piece the movie together better than I did, but from my perspective, this movie is just shots of Hawke walking around Italy in the dark. Sometimes he wears a mask (this was shot during the pandemic before vaccines were available, after all), but it's pretty inconsistent. He has shockingly few lines throughout "Zeros and Ones," and none of the strangers he talks to help provide any context for the audience.

The camera is shaky, and the lighting is scarce. One of the chief complaints I often hear about "Alien Vs Predator" was it's too dark. But that movie might as well have been a sunny day compared to the scenes in "Zeros and Ones." At least 33% of this movie was so dark I couldn't see what was happening on the screen.

My wife, Meghan, was sitting on the couch next to me for some of it, and even she remarked the camera work seemed harsh in how close it got in people's faces. It looked like a film school project.

From what little I could piece together, Hawke's character was looking for his brother. His brother was supposed to be in prison. Or he was supposed to be dead. It was difficult to pick out little bits of context from the nonsensical dialogue that fills "Zeros and Ones."

Hawke was some kind of member of the military. He ran around filming things with a camera, recorded himself having sex with a woman at some point, and then maybe he tried to get a different woman and her child out of the city right as a bunch of unspecified soldiers with guns surrounded the building they were on top of. That's the most I could make of this movie.

And then it just kind of ... ends. There are some scenes of a cafe opening, some kids dancing in the street as daylight finally makes an entrance, and the credits roll while I shouted, "Thank God it's over!"

Spliced into random moments of "Zeros and Ones" are pictures of classical artwork like "The Creation of Adam." Random diatribes about God, Christ, and patriotism played while the artwork was on screen. I had no idea what any of it meant.

Director Abel Ferrara is naturally owed some slack here. It couldn't have been easy to make a film during a pandemic, especially in a hard-hit country like Italy. So the fact that this 70-year-old director got an entire movie made under such conditions is worth some acknowledgement.

But I'm not exaggerating when I say I would rather marathon all the "Highlander" sequels than watch "Zeros and Ones" one more time.

Awkward camera work, terrible lighting, and an incoherent series of scenes stitched together in something barely resembling chronology ruin each and every moment of this film.