'21 holiday travel season a stress test for airlines in U.S. 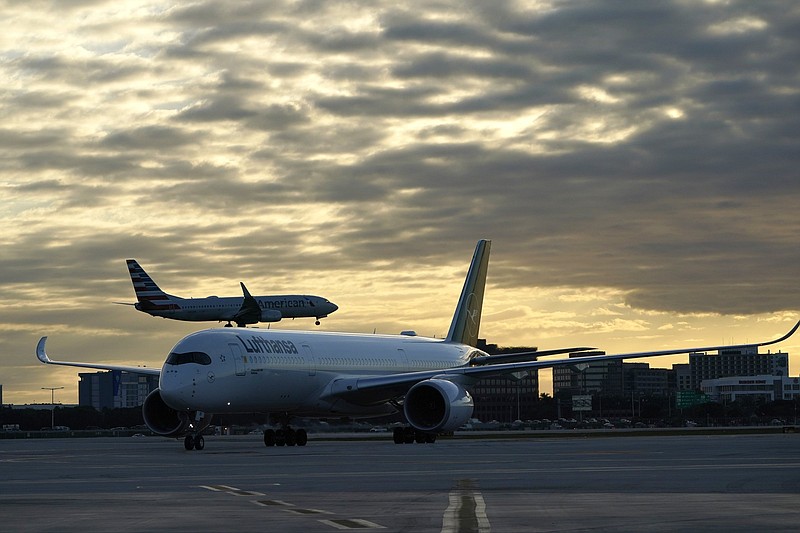 A Lufthansa flight arrives from Munich, Germany, as an American Airlines aircraft takes off at Miami International Airport recently. The holiday travel season will test whether the nation’s air carriers can withstand the highest passenger volumes of the pandemic era. (AP/Lynne Sladky)

WASHINGTON -- U.S. airlines are about to confront their biggest test since the beginning of the pandemic.

Twenty months into the health crisis, travelers are eager for in-person celebrations far from home with family and friends. The number of people expected to fly this Thanksgiving holiday season will approach prepandemic levels, airline officials say.

But their journeys are in the hands of an industry still struggling to recover from the depths of the pandemic, when thousands of workers were sidelined as nearly empty planes crisscrossed the country.

Traveling during the holidays has always been challenging -- given the sheer volume of passengers and unpredictability of weather -- but the pandemic has thrown in an added layer of uncertainty. Despite receiving billions of dollars from government rescue packages to ensure airlines were ready when demand returned, carriers are struggling to rebuild their operations.

Weeks after buckling under pressure, the holiday travel season that begins this month will gauge whether the nation's air carriers, airports and security personnel can withstand the highest passenger volumes of the pandemic era.

"While we've had full flights and a lot more people at the airport since the beginning of the spring, we've never had a period when we've had such a large volume of travelers in such a compressed time frame," said aviation analyst Henry Harteveldt. "It puts everybody under an additional level of stress and strain."

The Transportation Security Administration reported it expects to screen 20 million people during the Thanksgiving week based on reservations data it receives from airlines, which would be about 85% of the passenger count in 2019. The Sunday after Thanksgiving is projected to have 2.4 million air travelers, which would make it the busiest day at U.S. airports this year.

The increase comes alongside a federal mask mandate that has fueled a disturbing uptick in violent altercations, which airline workers say has left them exhausted and fearful.

However, concerns by some industry observers that a federal vaccine mandate could sideline thousands of airline workers during the holiday travel season were alleviated when a federal appeals court halted the Biden administration's vaccine or testing requirement for private businesses. Before that, the administration had pushed a December deadline for compliance to January, giving the industry time to get through the holidays.

Travelers said they are hoping for the best.

Michael Fanning, 63, and his wife were careful to book direct flights from Charlotte, N.C., to Boulder, Colo., where they will spend the holidays with family, including a 2-year-old grandson. They chose American Airlines, aware of a late October meltdown that prompted the cancellation of more than 2,000 flights amid weather and staffing problems.

"We're crossing our fingers it will all work out well," Fanning said.

Along with American, Southwest and Spirit Airlines are among carriers that have stumbled this year, canceling thousands of flights and leaving customers stranded at airports across the country this summer and fall, in part, because of staffing shortages. The airlines say they have taken steps -- such as bringing more workers back and trimming flight schedules -- to ensure a smooth holiday season.

It's not just airlines feeling the strain.

While the TSA avoided high-profile mishaps as the number of daily air passengers surpassed 1 million, then 2 million this spring and summer, it has struggled with staffing.

Earlier this year, the agency launched an aggressive campaign to hire 6,000 new officers, offering signing bonuses and other incentives. Agency leadership, however, said it is ready to handle the onslaught of travelers.

"We're confident that we have the staffing that we'll need to be able to manage the passenger volumes that we project," TSA administrator David Pekoske said.

The head of the union that represents TSA officers cautioned that the agency has been slow to move workers to the front lines. Everett Kelley, president of the American Federation of Government Employees, said during the House subcommittee meeting that long wait times should be expected over the holidays at the nation's airports.

"They're just going to be there because of the fact there's such a high turnover and the fact that we've not done an exceptional job in making sure that the workforce was replenished," Kelley said. "We still have people in training that should be on the floor performing the job right now."

The airline industry received $54 billion in grants as part of three federal coronavirus aid packages, singled out early in the pandemic when passenger counts fell more than 90% and the industry appeared on the verge of collapse. The money was provided to ensure carriers could recover -- on the condition that they not furlough employees.

Still, airlines persuaded employees to take lengthy voluntary leaves or early retirements. Experts say that left carriers stretched thin as they headed into the summer while trying to capitalize on rising demand for air travel as virus counts waned. American and Southwest adopted aggressive strategies, only to suffer from debacles that cost them tens of millions of dollars.

As virus transmissions have fallen and vaccinations are extended to younger children, airlines are facing a surge in year-end travel demand after months of staffing trims. As of September, the most recent data available, major passenger airlines employed 56,000 fewer people than before the pandemic, according to the Bureau of Transportation Statistics -- a contraction of 12%.