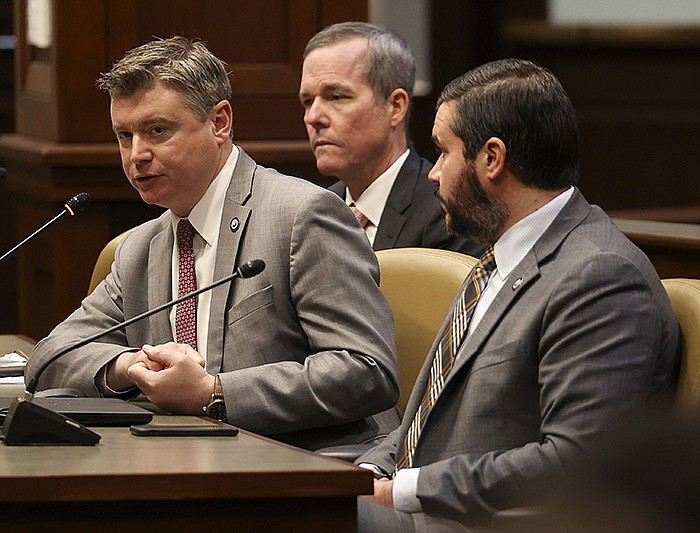 Brian Bowen (left), chief of staff for the attorney general, UAMS Chancellor Cam Patterson (rear) and Bradford Nye, the attorney general’s legislative director, answer questions Friday at a meeting of the Arkansas Legislative Council. Patterson told the council that UAMS was “between a rock and a hard place.” (Arkansas Democrat-Gazette/Staton Breidenthal)

The Arkansas Legislative Council postponed Friday a vote on the University of Arkansas for Medical Sciences' request to mandate covid-19 vaccinations for its nearly 12,000 employees.

UAMS Chancellor Cam Patterson told the council at the Friday morning hearing that the institution stands to lose $600 million in Medicare and Medicaid funding if its employees are not fully vaccinated or receive medical or religious exemptions by Jan. 4, in accordance with a federal Centers for Medicare and Medicaid Services regulation issued earlier this month.

The Biden administration mandate conflicts with a state law passed in April that prohibits vaccination dictates at state agencies without approval from the Legislative Council.

UAMS notified its employees of the federal rule in a systemwide email Monday. The rule includes a Dec. 6 deadline for employees to receive at least a first dose of Pfizer or Moderna vaccine or the one-dose Johnson & Johnson shot.

About 82% of staffers in the state's largest health care system are fully vaccinated, leaving fewer than 2,000 unvaccinated, Patterson said Friday.

He fielded almost two hours of questions from legislators who challenged UAMS' decision to adhere to the federal rule. Several legislators were concerned that making vaccination a condition of employment would create a staffing shortage at health care facilities.

Patterson told the council that UAMS was "between a rock and a hard place," and he wished he did not have to ask for a decision on short notice.

"We hoped we would get guidance from CMS on Oct. 1, which was initially promised, and that would have given us all much longer to have some good conversation about this issue," he said. "When CMS guidance did appear [Nov. 4], we were forced to scramble."

The state law, passed earlier this year, states that receiving a covid-19 vaccine "shall not be a condition of education, employment, entry, or services from the state or a state agency or entity."

However, the federal mandate states that "[CMS] will not hesitate to use its full enforcement authority to protect the health and safety of patients" at facilities that do not comply with the requirement.

The state was also one of several to challenge the federal Occupational Safety and Health Administration's temporary requirement for companies with more than 100 employees to require vaccinations or covid-19 testing. A Nov. 12 appeals court ruling blocked the mandate "until further court order."

Rutledge's chief of staff, Brian Bowen, and legislative director Bradford Nye told the council they anticipate a ruling in the challenge to the Centers for Medicare and Medicaid Services mandate by the week of Nov. 29, ahead of the first vaccination deadline.

The council then voted to revisit the requests from UAMS and the Human Services and Veterans Affairs departments after the ruling in the lawsuit.

Bowen and Nye said they could not answer some of the legislators' questions without unnecessary speculation, such as when state Rep. Jack Ladyman, R-Jonesboro, asked if a state agency that implemented an "unconstitutional" mandate would face no repercussions.

"If it was completely outside their authority and they should have known better, there could potentially be some repercussions, but it starts to get a little speculative for us," Nye said.

State Sen. Bob Ballinger, R-Ozark, asked if the attorney general's office would advise a state agency to avoid violating state law if the council votes down a request for a vaccine mandate.

Nye said the office would not advise any agency to violate state law but hesitated to comment further on a law that might be challenged in court.

"I think we're going to be in a position that if we go forward and [this law] causes problems, there will be some statutory challenges to that act," he said.

Patterson said Medicare and Medicaid funding supports not only the treatment of patients but also specialized care programs, physician residency training and research for cures, all of which would be in jeopardy if UAMS does not comply with the federal mandate.

UAMS has 60 days' worth of "cash on hand" if it loses federal funding, Patterson said in response to a question from state Sen. Ricky Hill, R-Cabot.

"It sounds to me like if this mandate is in place and you lose those employees [who refuse the vaccine], those services you're referring to are going to shut down anyway," Hill said.

Patterson said the loss of funding would force UAMS to eliminate "hundreds of services" and "pare down what we do to only those clinical services that generate revenue to cover the costs."

Ballinger said UAMS should not have told its employees to follow a mandate that is currently facing a legal challenge.

The comment received applause from several audience members, many of who wore T-shirts that expressed their opposition to vaccine mandates. State Rep. Jeff Wardlaw, R-Hermitage, the council's House chairman, said he would ask audience members to leave if they applauded again.

Patterson said he hoped the UAMS mandate was not perceived the way Ballinger described it, and he said UAMS only requested an exemption to state law because of pressure from the federal government.

"Because all the other hospitals in Central Arkansas have implemented a vaccine mandate, maybe some of the people who choose not to work at those hospitals will come to UAMS and take advantage of our religious exemption, and we'll have more and better health care workers at UAMS," Patterson said. "That would be my goal."

As of Friday morning, UAMS had 111 pending requests for religious exemptions to the vaccination mandate, Patterson said. He reassured several legislators that the institution would consider all the requests.

Ballinger acknowledged that the loss of Medicare and Medicaid funding would be detrimental to health care in Arkansas.

Sen. Larry Teague, D-Nashville, said a constituent asked him if he planned to cast a vote that would cost UAMS its funding to care for elderly and disabled patients, and he said he would not do so.

"I voted for every mandate block during the session, but at some point you have to stand up for people who can't stand up for themselves," Teague said.

The state Department of Human Services issued memos on Nov. 10 for the State Hospital and on Nov. 12 for the Arkansas Health Center, stating that employees must be vaccinated or receive an exemption by the federal deadline or risk their employment at the department.

Secretary Cindy Gillespie said the department wanted to "begin taking that first step, should it be necessary" to obtain permission to impose a vaccine requirement from the Legislative Council. She also said the department is working with the attorney general's office on the federal lawsuit, and she repeatedly expressed concern that the federal mandate would drive staff at the affected facilities to leave.

Those facilities receive nearly $125 million in federal funds, Gillespie said, and about 67% of employees at those facilities are fully vaccinated. She emphasized that the five Human Development Centers for people with disabilities provide care that patients can't get anywhere else in the state.

"It is a health and safety issue if we lose any more staff," Gillespie said. "We are down in staffing. We are making those points as vehemently as we can. We are making those comments to [the Centers for Medicare and Medicaid Services], and in our ongoing discussions with them, along with other states, about how we should implement this, we are raising all kinds of practical issues."

Ladyman asked Gillespie if the department would anticipate more patient deaths from a shortage of caretakers on staff than deaths from covid-19 if unvaccinated employees leave or get fired.

"If this [mandate] were to come into full fruition, our goal is still to maintain all our staff as well as to continue hiring and add back the staff we've lost," Gillespie said.

Additionally, the Department of Veterans Affairs asked the council for permission to draft a policy for compliance with the vaccination mandate "just in case we need it" at the state veterans homes in Little Rock and Fayetteville, Col. Erica Ingram told the council.

The homes provide hospice care, nursing services and physical and occupational therapy for veterans with "a medical need for a nursing home placement," according to the department website.

Ingram said 95.5% of employees in the Little Rock home and 80% in the Fayetteville home have been vaccinated.

State Sen. Linda Chesterfield, D-Little Rock, said she believed the council should approve requests for vaccine mandates in order to protect Arkansans who are elderly or have compromised immune systems.

"I stopped going to my dentist because people weren't vaccinated and I didn't want them in my mouth," Chesterfield said. "Maybe there are others who don't care about that, but when you become a senior citizen, you're even more careful about where you go and what you do because you want to be safe."

Chesterfield voiced her opposition to a resolution that the council passed at the end of the hearing, opposing the federal mandate and supporting the multi-state lawsuit against it.

Ladyman objected to Elliott's statement and expressed support for the resolution, saying the goal was "to save lives and protect the Constitution." 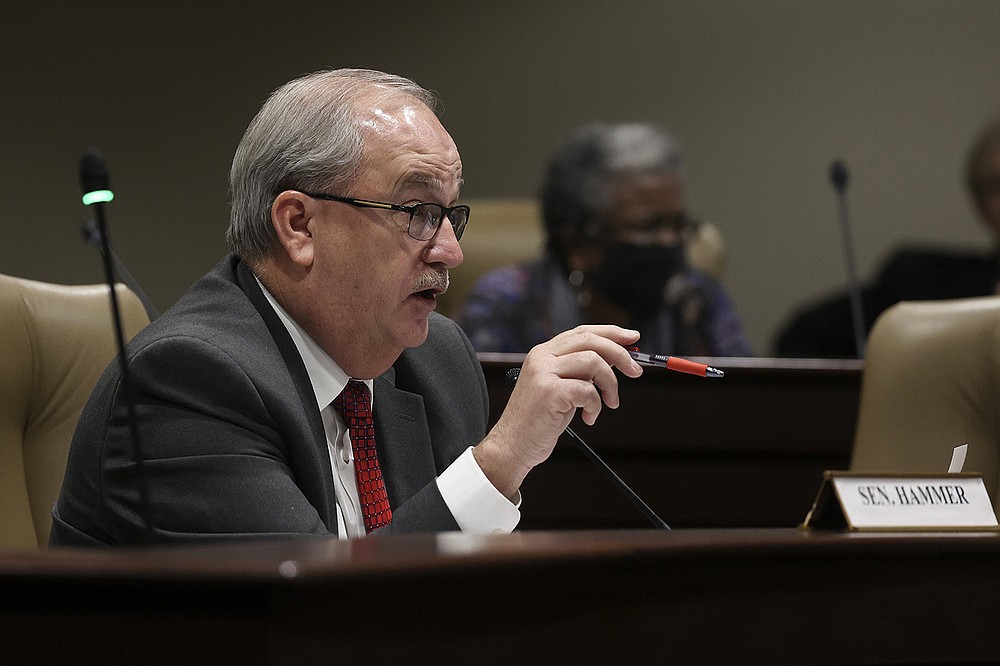