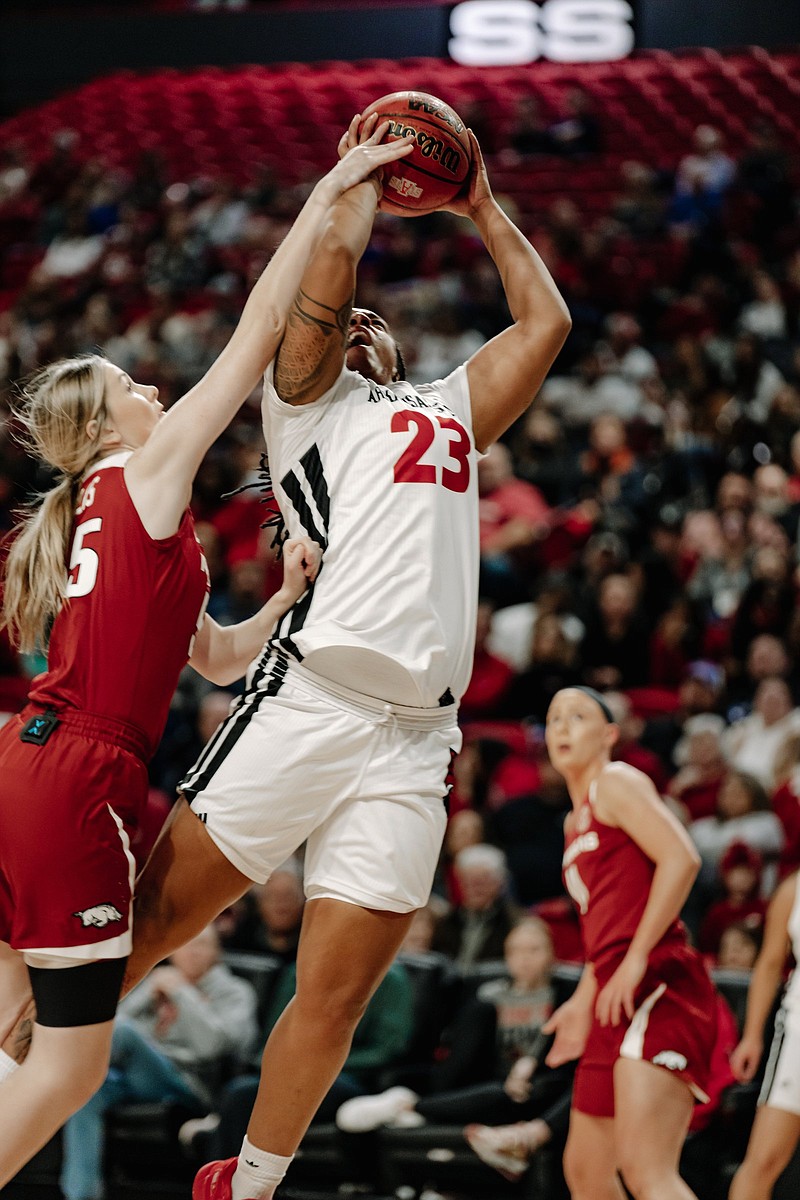 JONESBORO — The depth of the University of Arkansas women’s basketball team was on full display Friday evening at First National Bank Arena.

Despite foul trouble and freshman Jersey Wolfenbarger being sidelined by illness, the Razorbacks dominated the second half en route to a 94-71 win over Arkansas State in the first meeting between the two intra-state schools since 2005 in front of a crowd of 2,574.

Makayla Daniels poured in a game-high 22 points, leading four Razorbacks in double figures. The junior guard scored 10 points in the first quarter to help Arkansas fend off the Red Wolves, who started with lots of energy.

Arkansas (3-1) never trailed after Daniels’ three-pointer midway through the first quarter gave the Razorbacks a 15-14 advantage.

The Razorbacks trailed early as Jade Upshaw hit a pair of three-pointers for a 12-6 lead, but Arkansas used a 13-4 spurt to turn a two-point deficit to a 25-18 lead and never trailed again.

Freshman Samara Spencer added 16 points off the bench, while Amber Ramirez chipped in 13 and Marquesha Davis 10 for the Razorbacks.

“We have depth and we have a couple more there that are ready when the opportunity comes,” Neighbors said. “I do think that the way we’ve been playing, counting the exhibition games, counting the scrimmage games, starting different people and playing different rotations was really important because we got in serious foul trouble tonight.

“I’ve got all kinds of confidence in Emrie [Ellis] and Sam’s got enough confidence for all of us and her. She’s earned it. Nothing says freshman about her other than the number of credit hours she has. Yeah, our depth is going to be a problem for a lot of teams I think.” Neighbors said he was simply being cautious holding Wolfenbarger out.

Daniels acknowledged the Razorbacks didn’t treat the game just like any other. It was the first meeting between the two teams since the Arkansas policy against intra-state competition was relaxed. But she also said the team wasn’t nervous.

“I think people try to tell us to treat it like every other game, but I think everybody in the state of Arkansas knows, it’s not like every other game,” said Daniels, who added team highs of eight rebounds and five assists. “Everybody wants to beat us. I think it was treated a little differently but nothing like scout-wise.

“We knew the atmosphere was going to be just a tad bit different. People are playing in front of their hometown crowds, so I think everybody was pretty hyped up for it.” The Red Wolves (2-2) scored the first bucket of the second quarter, but Daniels and Sasha Goforth combined for nine consecutive points to give Arkansas a 37-22 lead with 7:03 left in the first half. ASU got no closer than eight the rest of the way.

Keya Patton, a transfer from Auburn, led ASU with 17 points, while Trinitee Jackson registered a double-double with 14 points and a game-high 16 rebounds.

ASU Coach Matt Daniel said the Razorbacks’ length gave his team problems and had trouble keeping Arkansas from the basket.

“It was a lot of missed assignments,” Daniel said. “I thought we hit a lull in — I can’t remember — third quarter or the fourth, I didn’t think we were fighting.” The start of the game was delayed by a few minutes as officials tried to repair a problem with one of the shot clocks without succcess. So Arkansas State was assessed an administrative technical foul to begin the game. However, Ramirez missed the free throw. There was no shot clock on either end, instead the public address announcer would let teams know when it was winding down.

Norchad Omier posted his second double-double of the season, leading the Red Wolves with 18 points and 12 rebounds at the Show Me Center in Cape Girardeau, Mo.

ASU (3-1) used a 28-10 run spanning nearly nine minutes across the first and second halves to break open a contest that was tied at 28 at the 5:01 mark of the first half.

Caleb Fields dished out a team-best 7 assists to go along with 16 points and 6 rebounds, and Avery Felts knocked down three of the Red Wolves’ eight three-pointers.

The Redhawks (1-2) shot just 36% from the floor as a team and never got closer than 12 points over the final 14 minutes of the contest.

PORTLAND, Ore. — A monster outing from Shawn Williams wasn’t enough to lead the University of Arkansas at Pine Bluff to its first victory of the season. Portland had five players land in double figures, spearheaded by Moses Wood’s 21 points, as the Pilots dominated inside to beat the Golden Lions. Chika Nduka had 15 points and six rebounds, while Tyler Robertson, Vasilije Vucinic and Mike Meadows all had 10 points for Portland (3-1), which shot 56.4% (31 of 55) and outscored UAPB (0-4) 42-18 on points in the paint. The Pilots also held an 37-29 rebounding edge.

All of that helped offset a career night from Williams, who hit 11 of 20 shots to finish with 31 points. He also added 5 assists, 3 steals and 3 rebounds in 38 minutes. Brandon Brown had 15 points and 11 rebounds for the Golden Lions. Portland led 45-35 at halftime and had a 76-59 cushion with 4:15 remaining. UAPB trimmed its deficit to 82-74 with less than a minute left before running out of time.

The Golden Lions shot 44.1% (26 of 59) from the floor, their best shooting performance of the year, but they also turned the ball over a season-high 17 times.