The world in brief: Ex-Georgia leader to end hunger strike 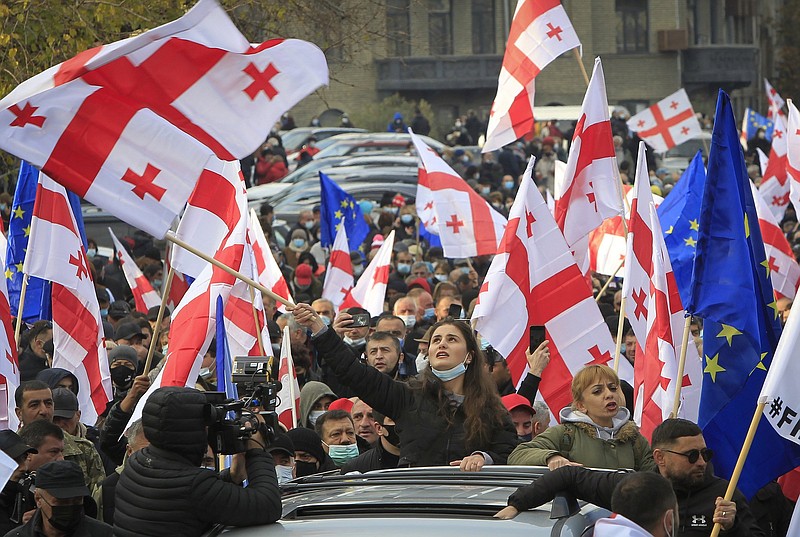 TBILISI, Georgia -- A lawyer for Mikheil Saakashvili said Friday that the imprisoned former Georgian president has agreed to end a seven-week hunger strike that has caused him neurological damage.

Nika Gvaramia also said Saakashvili has agreed to be transferred from a prison clinic to a military hospital, an offer the country's government made hours earlier after persistent calls for him to be moved to a regular hospital for better care.

His supporters have repeatedly held protests, including one outside the parliament in the capital Tbilisi on Friday, denouncing Saakashvili's arrest and calling for him to be given better treatment.

On Thursday, Saakashvili fell and lost consciousness at the end of a visit with a lawyer in prison.

The national ombudsman's office said the fall was due to a condition called Wernicke's encephalopathy, which is caused by vitamin-B deficiency and can result in vision and motor problems.

Saakashvili, who was president from 2008-13, left Georgia for Ukraine after the end of his second term and was later convicted in absentia of abuse of power and sentenced to six years in prison. He was arrested Oct. 1 after returning to Georgia to try to bolster opposition forces in the run-up to nationwide municipal elections.

Britain poised to ban all wings of Hamas

LONDON -- The British government said Friday that it intends to ban the Palestinian militant group Hamas as a terrorist organization, saying it will no longer differentiate between the group's political and military wings.

The military arm of Hamas has been outlawed in the U.K. since 2001, but the organization as a whole is not proscribed.

Home Secretary Priti Patel, who is in charge of law-and-order issues, said she would proscribe the group "in its entirety, including its political wing."

"This is an important step, especially for the Jewish community," Patel said in a speech in Washington. "Hamas is fundamentally and rabidly antisemitic."

Patel said the group had "significant terrorist capability, including access to extensive and sophisticated weaponry, as well as terrorist training facilities."

A ban, which must be approved by Parliament, would make it illegal in Britain to be a member of Hamas or to express support for the group, including by flying its flag or wearing a T-shirt to that end. The maximum penalty would be 14 years in prison.

The government said it hoped the banning order would be approved by Parliament within the week and take effect Nov. 26.

Hamas, a Palestinian group that opposes Israel's existence, has governed the Gaza Strip since taking over the area in 2007, a year after it won a Palestinian election. It is considered a terrorist group by Israel, the U.S. and the European Union.

In Gaza, Hamas expressed "shock and dismay" at the decision and accused the U.K. of continuing "with its aggression against the Palestinian people."

MADRID -- A group of 39 Palestinian refugees has sought asylum in Spain after refusing to get back on a plane during a Barcelona stopover on their flight from Cairo, Spanish authorities said Friday.

Police are investigating the charter flight that flew the group into Spain's second-largest city Monday, a spokesman with Spain's Interior Ministry told The Associated Press.

The flight's final destination was the Ecuadorean capital, Quito, with scheduled stops in Barcelona and Bogota, Colombia.

When the plane landed at El Prat airport Monday, the group left the aircraft and later refused to get back on, said a spokeswoman with the Spanish government's delegation in Catalonia.

They remained at police facilities in the airport for five days and were provided with food and assistance, the spokeswoman said.

She said that by midday Friday, 29 of them had been allowed to formally enter Spain and were being cared for by social services. The asylum requests of the 10 remaining in the terminal were still being processed, the official said.

MANAGUA, Nicaragua -- Nicaragua's government announced Friday that it will withdraw from the Organization of American States, a regional body that has accused President Daniel Ortega's government of acts of repression and rigging this month's election.

Nicaragua Foreign Minister Denis Moncada said at a news conference that he sent an "official communication" to the organization's Secretary General Luis Almagro citing the body's "repeated acts of meddling" in Nicaragua.

Ortega was elected to a fourth term in Nov. 7 elections that were broadly criticized as a farce. Seven likely challengers were arrested and jailed in the months before the election.

The Organization of American States General Assembly last week voted to condemn the elections, saying they "were not free, fair or transparent, and lack democratic legitimacy."

Twenty-five countries in the Americas voted in favor of the resolution, while seven -- including Mexico -- abstained. Only Nicaragua voted against it.

Gallery: Rally for ex-leader of Georgia