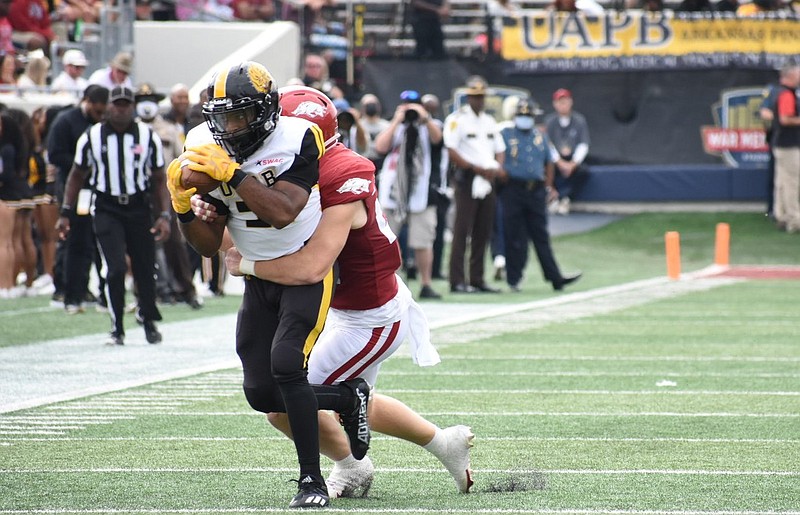 When the University of Arkansas at Pine Bluff's fall football season was released, the last game listed was expected to be a marquee game in the Southwestern Athletic Conference, much like their May 1 championship game.

The hope for both UAPB and Alabama A&M University was that, somehow, it would more than serve as a rematch of Alabama A&M's 40-33 victory in Jackson, Miss., but it would also prelude another meeting Dec. 4 on an on-campus site.

How hopes could fade so quickly.

"I think we've had quality showings every game," Lions Coach Doc Gamble said. "We've got to win, bottom line. We've got to win. That's what most important for us, to win. That helps with going into the offseason and recruiting as well."

Alabama A&M (6-3, 4-3 SWAC) has a winning season in the bag, thanks in large part to defeating South Carolina State, Bethune-Cookman and Tuskegee by a combined 14 points to start the season. But soon, three straight losses -- to a Grambling State team that earlier this week fired Broderick Fobbs, to Deion Sanders' Jackson State club and to SWAC newcomer Florida A&M -- took the SWAC target off Connell Maynor's Bulldogs.

The Bulldogs, who have since toppled Alabama State, Mississippi Valley State and Texas Southern, can finish the season strong on a four-game winning streak against UAPB (2-8, 1-6), a team looking for some sort of a high note on which to close Doc Gamble's second year at the helm.

UAPB has scored 20 or more points once in the past seven games – beating Grambling State 33-26 on Nov. 6.

The banged-up Lions, who endured a seven-game losing streak before that victory, thought they had built some momentum two weeks ago, but were humbled again at home by Florida A&M.

Kickoff today is scheduled for 1 p.m. at Louis Crews Stadium in Huntsville, Ala. Live video of the game can be streamed on AAMU's YouTube channel (aamuathletics) with KPBA-FM 99.3 "The Beat" carrying the game on the radio.

"Our mentality is to prepare to go win a football game," said Gamble, who is 6-9 overall at the school. "A&M is extremely good on offense."

Alabama A&M quarterback Aqeel Glass is the reigning SWAC Offensive Player of the Year and added a Player of the Week award after throwing for 462 yards and five touchdowns in a 52-49 win over Texas Southern last Saturday. The graduate student engineered a 13-play, 70-yard series that ended in a 1-yard pass to Bryson Clark with 42 seconds to go to finish a comeback from trailing 49-38 with 11:24 left.

Glass has thrown for 3,118 yards and 30 touchdowns against seven interceptions this season.

"He just continues to be Aqeel Glass, and he's got some great weapons to," Maynor said. "The offensive line is still improving. They continue to get better, and when you give him time, he can pick you apart with those weapons he has."

The Lions will have more than just Glass to contain.

"They like to throw it, throw it, throw it and throw it again, but they have a dynamic running back as well," Gamble said. "They're a really good football team offensively. They do some good things in the special teams you have to make sure you account for, and they're just as hungry as we are on defense. It may be one of those games where it could come down to the team with the ball last."