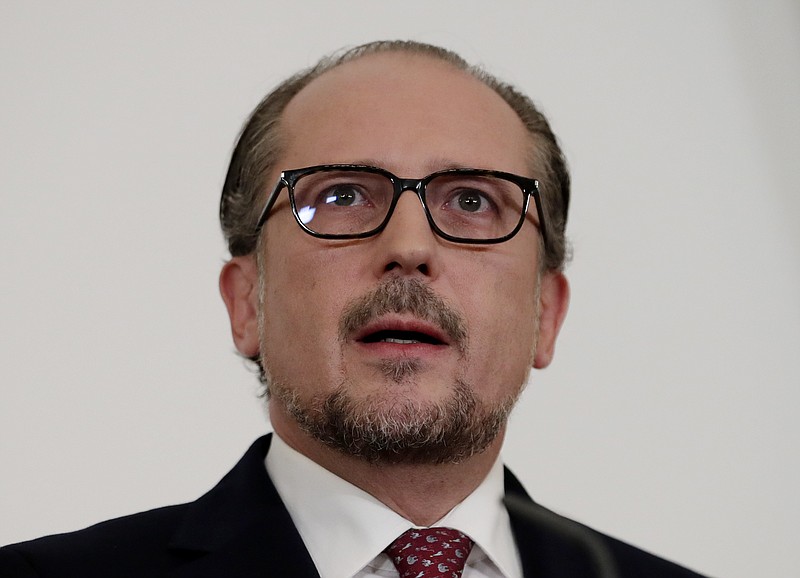 FILE - Austrian Chancellor Alexander Schallenberg addresses the media in the Federal Chancellery in Vienna, Austria, Oct. 11, 2021. Austrian Chancellor Alexander Schallenberg says the country will go into a national lockdown to contain a fourth wave of coronavirus cases. Schallenberg said the lockdown will start Monday Nov. 22, 2021, and initially last for 10 days. Students will have to go back into home schooling, restaurants will close and cultural events will be canceled. . (AP Photo/Lisa Leutner, File)

VIENNA -- Austria announced a national lockdown and a plan to mandate vaccinations as coronavirus infections hit a record high Friday, forcing the government to walk back promises that strict shutdowns were a thing of the past.

While the scope of the proposed mandate was unclear, a blanket requirement would be a first for a Western country. Chancellor Alexander Schallenberg said those who didn't comply would probably be fined but gave no details.

The moves come as vaccinations in Austria have plateaued at one of the lowest rates in Western Europe, and as hospitals in heavily hit states have warned that their intensive-care units are reaching capacity. Average daily deaths have tripled in recent weeks, though the number of fatalities reported over the past week remains well below the high of last winter and 13 U.S. states are seeing more deaths per 100,000 people.

Earlier this month, Schallenberg indicated a full lockdown would not be needed and instead imposed the restrictions only on those not vaccinated.

The lockdown will start Monday and initially will last for 10 days, after which it will be reevaluated, Schallenberg said. Starting Feb. 1, the country will also make vaccinations mandatory -- though the chancellor gave few details about what that meant or how it would work.

"Increasing the vaccination rate -- and I think we're all in agreement on this -- is our only way to break out of this vicious cycle of viral waves and lockdown discussions for good," Schallenberg said. "We don't want a fifth wave, we don't want a sixth and seventh wave."

Austria is among several Western European countries where infections are rising rapidly and where there are concerns that vaccination rates, while relatively high, are insufficient to hold off a winter surge at hospitals.

[Video not showing up above? Click here to watch » arkansasonline.com/1120austria/]

Thanks largely to inoculation, hospitals in the region are not under the same pressure they were earlier in the pandemic, but many are still straining to handle rising numbers of covid-19 patients while also attempting to clear backlogs with exhausted or sick staff.

Not quite 66% of Austria's 8.9 million people are fully vaccinated, according to government figures. It has tried various measures to boost that number. Like many European countries, it introduced a "green pass" -- which shows proof of vaccination, recovery from covid-19 or a negative test result, and was required to enter restaurants and attend cultural events.

"There are too many political forces in this country, which vehemently, massively and publicly oppose (vaccination). ... This is actually an attack on our health system," Schallenberg said. "The results are overcrowded intensive-care units and enormous human suffering."

A wide vaccine mandate would make Austria's one of the most stringent requirements in the world, though many countries have imposed targeted mandates or restrictions on what unvaccinated people can do.

The U.S. government is moving forward with a requirement for mandatory vaccines or regular testing for every worker in the country at businesses with more than 100 employees, though opponents have challenged it in court. In addition, numerous corporations and governments across the country have imposed their own vaccine requirements.

France required health care workers to get the vaccine, and Britain recently announced a similar rule for health staff who work with the public. Slovakia announced it will ban those who have not been vaccinated from all nonessential stores and shopping malls.

Austria's new lockdown is its fourth since the pandemic began and comes as the country has struggled to stop spiraling case numbers. On Friday, the country reported 15,809 new infections, an all-time high.

When it takes effect Monday, restaurants, Christmas markets and most stores will close, and cultural events will be canceled. People will be able to leave their homes only for certain reasons, including buying groceries, going to the doctor or exercising.

Wolfgang Mueckstein, the country's health minister, said kindergartens and schools would remain open for those who needed them, but parents were asked to keep their children at home if possible.

In Germany, meanwhile, the head of the disease control agency said Friday the country has entered a "nationwide state of emergency" because of surging infections.

Lothar Wieler, head of the Robert Koch Institute, said regular medical care cannot be guaranteed anymore in some parts of the country because hospitals and intensive-care wards are overstretched.

The German air force confirmed a report by the newspaper Bild that it was preparing to help transfer patients to clinics with free beds.

"All of Germany is one big outbreak," Wieler told reporters in Berlin. "This is a nationwide state of emergency. We need to pull the emergency brake."

He called for urgent additional measures to tackle the rise in covid-19 cases, which topped 50,000 for the third day running. The institute reported 201 more deaths, taking the toll to 98,739 since the start of the outbreak.

Wieler's comments came as the upper house of parliament Friday approved new measures to control the outbreak proposed by the center-left alliance that emerged after the Sept. 26 national election. The measures, which take effect Wednesday, include requirements for people to prove they are vaccinated, recently recovered from covid-19 or have tested negative in order to access shared workplaces or public transport. Employees will have to work from home whenever possible.

Some states are considering mandatory vaccinations for some professional groups such as medical staff and nursing home employees.

Neither a nationwide lockdown nor a compulsory-vaccination policy is currently being discussed in Germany, where the outgoing Merkel government and the three-party alliance hoping to replace it are at odds over how to respond to the pandemic.

"In the short term we won't manage to break the wave with vaccinations and booster shots alone," he said at a news conference with Wieler, who called on Germans to help limit the spread of the virus by reducing their social contacts.

The southern state of Bavaria announced Friday that it is canceling all Christmas markets this year and closing bars and clubs for three weeks.

Bavarian governor Markus Soeder said regions with more than 1,000 new weekly cases per 100,000 inhabitants would face even tougher restrictions, including the closure of all restaurants, sports and cultural venues.

Information for this article was contributed by Emily Schultheis, Kirsten Grieshaber, Philipp Jenne and Frank Jordans of The Associated Press. 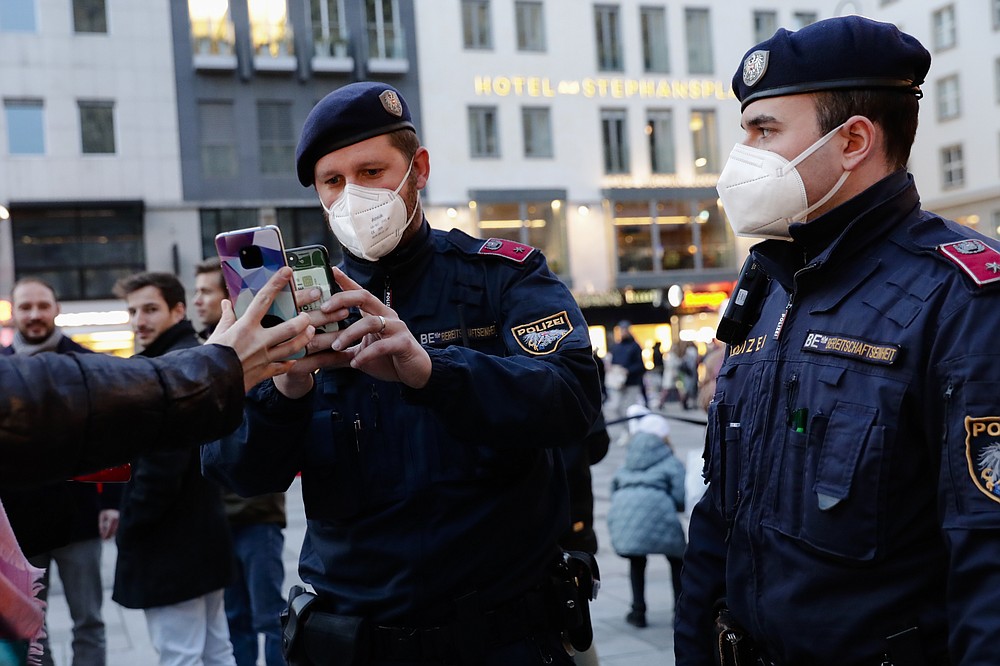 Police officers check the vaccination status of visitors during a patrol on a Christmas market in Vienna, Austria, Friday, Nov. 19, 2021. Austrian Chancellor Alexander Schallenberg says the country will go into a national lockdown to contain a fourth wave of coronavirus cases. Schallenberg said the lockdown will start Monday, Nov.22, and initially last for 10 days. (AP Photo/Lisa Leutner)