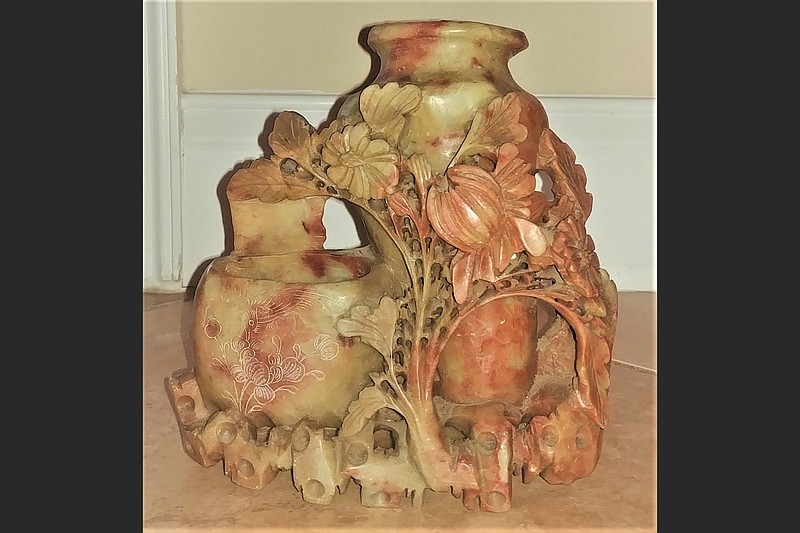 It may be called &quot;soapstone,&quot; but don't take a shower with it. (Reader submitted/TNS)

DEAR HELAINE AND JOE: This vase was in my parents' home and has to be at least 60 years old. A bird with flowers is etched on the front and the word "China" is on the back. It's 63/4 inches by 63/4 inches and is made from smooth stone that is definitely not porcelain. If my parents told me the origins, I do not recall what they said. I would like to know if it has any value other than sentimental.

DEAR J.R.: No, this is not porcelain. J.R. is exactly right on this point.

Instead, it is soapstone, which is a talc-like mineral that has a range of hardness depending on the amount of talc it contains. A large percentage of talc (say 75%) can make for a very soft stone that has a hardness as low as 1 on the Mohs scale. A variety of soapstone with less talc in its composition can have a Mohs scale hardness of up to 5. Jade, for example, is much harder at 6 to 6.5 on the Mohs scale.

It's called soapstone because the softer grades feel similar to soap when touched. They say soapstone has been carved for thousands of years, but this piece was made sometime between 1891 and probably the start of World War I. We know this because of the scratched in "China" mark, which was placed there in response to the McKinley Tariff Act of 1890, and indicates where the piece was made.

What fascinates us about the piece is that one of the vessels is obviously a vase — but what about the second lower, bowl-like container? Is this for flowers, too? We think maybe not, and would like to suggest it may be a spill vase.

A "spill" is a strip of paper rolled up tightly or a slip of wood used to light a candle, lamp or pipe. (The word was derived from "spile," which is a small wooden peg.) Victorian houses — and later houses without electricity — always had a spill container on the mantel that was ignited in the fireplace to light lamps, candles or cigars.

According to Harriet Beecher Stowe and her sister Catherine Beecher, "Lamps should be lighted with a strip of folded or rolled paper, of which a quantity should be kept around the house." After around 1860, safety matches were available, but women's magazines of that time published ways to make decorative spills.

Families used old letters and colored craft paper to make spills. Newspapers, however, did not make good spills, because the material tended to burn too fast and singe the fingers. In short, we believe the small bowl-like container on this Chinese soapstone piece was intended to contain spills — or maybe safety matches.

In any event, this export/tourist quality example sculpture is worth between $50 and $75.