Where is World headed?

Christian magazine faces resignations, its future up in air by BEN SMITH The New York Times | November 20, 2021 at 3:32 a.m. 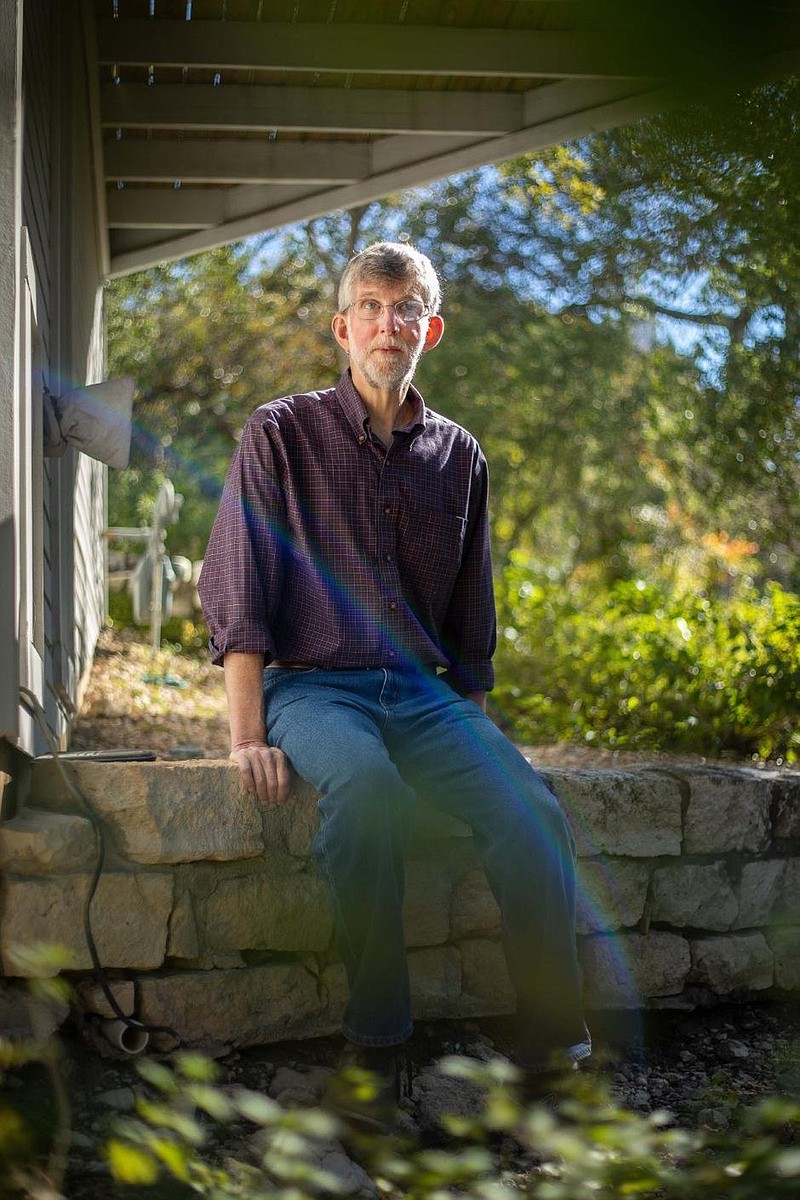 Marvin Olasky, editor of the Christian magazine, World, recently submitted his resignation after nearly three decades at the helm. Olasky is departing after receiving an effective “vote of no confidence” from World’s board, he said. (Montinique Monroe/The New York Times)

When Marvin Olasky gets angry emails from readers -- more often than not about an expose of wrongdoing at an evangelical church, or about a story that reflects poorly on Donald Trump -- he has a stock reply.

"We think this is useful to the Church," he tells disgruntled readers, "because we are also sinners."

As the longtime editor of World, a Christian news organization that has a website, a biweekly magazine and a set of podcasts, Olasky has delivered a mix of hard news and watchdog articles about the evangelical realm under a journalistic philosophy he calls "biblical objectivity."

It involves taking strong stands where the Bible is clear, which has led World to oppose abortion rights and support refugees, he says, and to follow reportable facts where the Bible doesn't provide clear guidance.

The concept served Olasky well from 1994, when he became the editor of World, until Nov. 1, when he submitted his resignation.

He had, he said, received an effective "vote of no confidence" from World's board, which had recently started a section of the website, World Opinions, without fully consulting him. The new section offers opinion essays on religious issues with the kind of commentary on secular topics such as mask mandates, inflation, race and President Joe Biden's spending plans that can be found on any number of other conservative websites.

At one level, Olasky's departure is just another example of the American news media sinking deeper into polarization, as one more conservative news outlet, which had almost miraculously retained its independence, is conquered by Trump.

It also marks the end of a remarkable era at a publication that has shaken evangelical churches and related institutions with its deeply reported articles. Far-right writer Dinesh D'Souza resigned in 2012 as president of the King's College after World reported that he had attended a Christian conference with "a woman not his wife." In 2020, World reported that several young women had complained that a North Carolina Republican running for Congress, Madison Cawthorn, had exhibited "sexually or verbally aggressive behavior toward them when they were teenagers." At a time when hot takes get the clicks, these articles offered something old-fashioned and hard for any community to take: accountability reporting.

"I am not interested in the project of a conservative opinion magazine -- there are lots out there already and that's not my vision of World," Olasky, 71, said from his home in Austin, Texas.

The CEO of God's World Publications, World's nonprofit parent, Kevin Martin, played down Olasky's resignation, noting that the editor had previously said he'd be departing next summer anyway. He said he admired Olasky and his definition of biblical objectivity, and "we are not going to diverge from that, by God's grace."

"I don't see in any way that we are becoming more partisan or more Trumpy," Martin said.

And its founder, Joel Belz, told me he believed Olasky's departure was simply an episode of "painful growing pains."

But many of World's longtime journalists have sided with Olasky. A few longtime staff members have left over the past year, and a prominent board member, David Skeel, resigned.

One journalist whose departure particularly rattled the newsroom is Mindy Belz, a writer for four decades and Joel Belz's sister-in-law. She resigned in October, saying in an internal memo shared with me that World was "heading in new directions, some I don't embrace and fear may compromise the hard reporting many of us have spent years cultivating."

In her final column, Belz, who was also an editor, wrote of her discomfort "with the strife and stridency that's befallen American evangelicalism, and with some directions World News Group is charting."

World was founded in 1986, after Joel Belz became frustrated that the evangelical world was relying on the secular press to expose wrongdoing within its community, notably television evangelists Jim and Tammy Faye Bakker, who were accused of misusing church money. Jim Bakker would eventually serve in prison after being convicted of federal fraud charges.

World's business operation is in Asheville, N.C., but its journalists were working remotely since long before covid-19. In 1994, Belz handed the editorial reins to Olasky, a slender, Yale-educated convert to Christianity who quickly became a pillar of Christian journalism. He educates reporters at the World Journalism Institute, where he is dean, schooling them in World's motto: "Sound journalism, grounded in facts and Biblical truth." For a time, he was also a leading voice in Republican policy: An occasional adviser to George W. Bush in his time as Texas governor, Olasky helped popularize the term "compassionate conservatism," a pillar of Bush's 2000 presidential campaign.

The wave of troubles at World started four presidential campaigns later, when World at first seemed to reflect white evangelical leaders' skepticism about Trump's personal morality, and World's polls of Christian leaders were widely cited as supporting the idea that Trump would have a problem with Christian voters.

Since 2016, many conservative evangelical leaders have gotten behind Trump. An emblematic one is Albert Mohler, a former World board member who is president of the Southern Baptist Theological Seminary. He wrote in 2016 that Trump was "the Great Evangelical Embarrassment," but in 2020, Mohler executed a complicated about-face, announcing that he would vote for Trump because Democrats are "antagonistic to biblical Christianity" on issues such as abortion and transgender rights.

World remains in an unusually strong position in a fast-changing media landscape, with a niche all its own and more than $11 million in revenue in 2019, according to publicly available tax forms. And although the future of World's newsroom is unclear, much of its online real estate is devoted to the new opinion section.

Its editor is Mohler, who opened it with a promise to join "the battle of ideas" and delivered a searing attack on Biden's Build Back Better bill.

Olasky's recent work shows a deep concern about where this is all headed. In a recent column, he deplored the "Flight 93" approach -- a reference to the hijacked flight on 9/11 where passengers banded together to storm the cockpit -- that he sees among many conservatives, who, he says, believe they must use any means necessary to keep America from being destroyed by liberals.

"Some on both political sides now say: We're heading toward social Armageddon. We are two nations. It's them or us," he wrote in October. "And yet, many on both sides still share the hope of the Pledge of Allegiance: 'one nation under God.' I'm on the one-nation team."

Olasky said he was grateful for his long run. He plans to stick around until the end of January, to complete the magazine's annual Roe v. Wade issue. 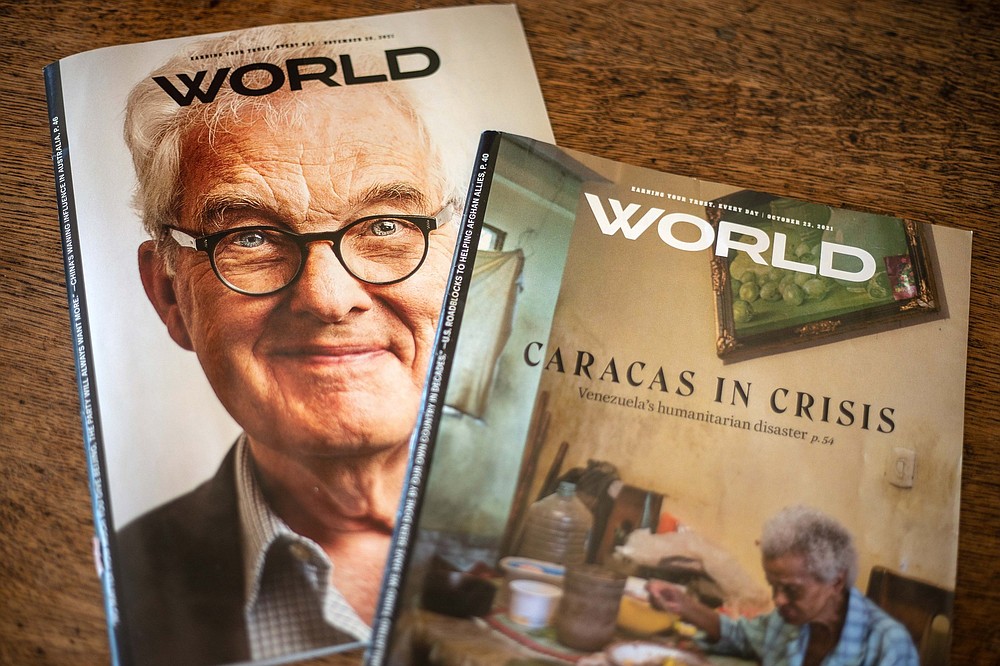 Recent issues of World at the home of Marvin Olasky its longtime editor. The magazine’s mission is to provide readers with “sound journalism, grounded in facts and Biblical truth.” (Montinique Monroe/The New York Times)
ADVERTISEMENT