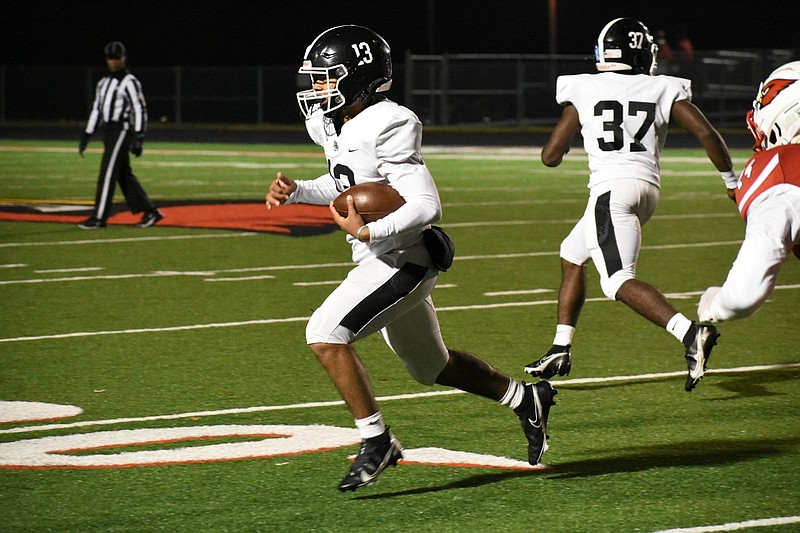 White Hall quarterback Mathew Martinez keeps the ball for a gain against Camden Fairview on Friday in Camden. The Bulldogs picked up a 35-14 win and will be headed to the third round of the playoffs for the third consecutive year. (Pine Bluff Commercial/I.C. Murrell)

CAMDEN -- The White Hall Bulldogs are coming back home -- with a long-awaited state championship berth on the line.

Mathew Martinez had a hand in three touchdowns, Durran Cain ran for two scores, and White Hall racked up 309 total yards Friday night in stunning 5A-South Conference champion Camden Fairview 35-14 in the quarterfinal round of the 5A state playoffs.

The result did not surprise Bulldogs Coach Bobby Bolding.

"I was nervous," he said. "I didn't know how our kids would respond going on the road, but I felt like we had a chance to beat them. I sure did, and it kind of came true. We played pretty well in all areas of the game in the first half."

White Hall (10-2) has reached the third round for the third consecutive year -- last year's 5A playoffs went five rounds -- and will host Little Rock Christian Academy next Friday in the semifinal round.

One of Weston's receptions went 14 yards for a touchdown with 8 seconds left before halftime, as the Bulldogs built a 28-7 lead.

"This is what we want," Martinez said. "We want to play the hot teams and beat them. We think we are the best team in the state."

Martinez fired a 26-yard completion to Jackson to set up Cain's 2-yard plunge into the end zone on the game's opening drive. The Cardinals (10-2) evened the score with their initial 12-play, 76-yard series mostly on the legs of quarterback Martavius Thomas, who capped it with an 11-yard toss to D.J. King.

White Hall responded with an 11-play, 80-yard march going into the second quarter. Tight end Austin Shores pulled down a 4-yard pass from Martinez to put the Bulldogs ahead 13-7, with a missed extra point.

What appeared to be a seesaw battle eventually turned into a wave of momentum for White Hall.

Weston picked off Thomas, who went 9 for 27 for 124 yards and two touchdowns. From that stop, the Bulldogs scored on their next two drives.

Martinez turned in a 7-yard touchdown run and completed the 14-yard strike to Weston, his second passing touchdown of the game.

The Bulldogs held the typically explosive Cardinals to 232 total yards, forcing them to punt on their first two drives of the second half and turn the ball over on downs on the next two series. The Cardinals finally ended a drought when Thomas hit Jatoney McGhee 52 yards for a score with 29 seconds remaining.

White Hall will try to take down Little Rock Christian a second time this season, having beaten last year's state runner-up 14-10 in Little Rock on Oct. 1. That game gave White Hall the upper hand in seeding and eventually its second home playoff game of the year.

Kickoff is scheduled for 7 p.m. next Friday at Bulldog Stadium, with the winner taking on either Pulaski Academy or Greenbrier in the championship. 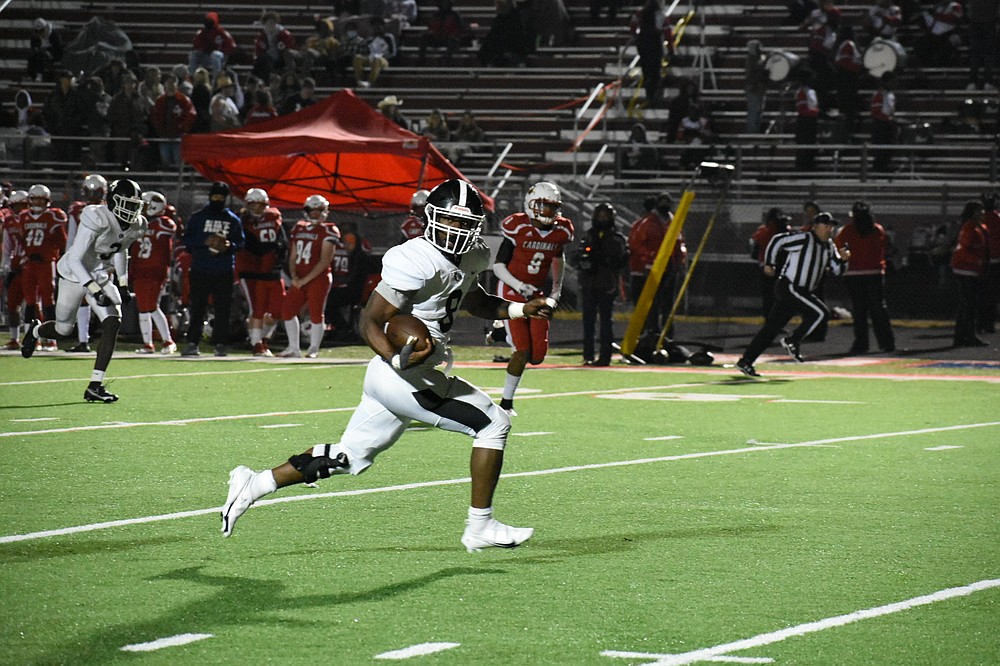