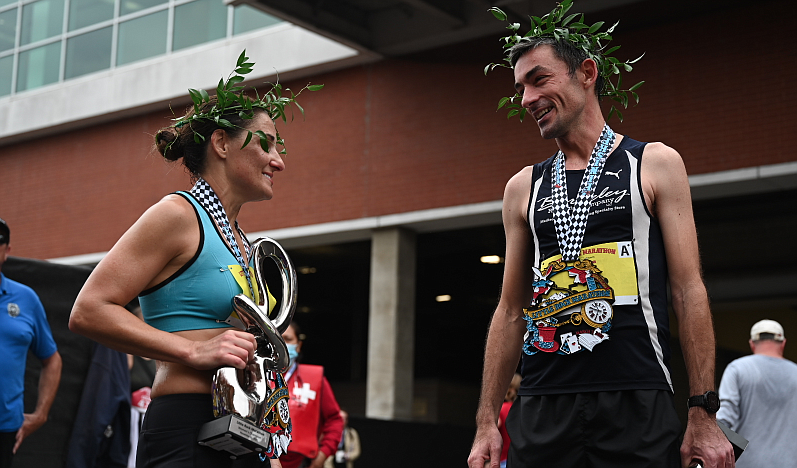 Tia Stone and Joseph Hoch, the women and men winners of the Little Rock marathon, talk with one another after finishing the race on Sunday, November 21, 2021. (Arkansas Democrat-Gazette/Stephen Swofford)

[Video not showing up above? Click here to watch » arkansasonline.com/1121hoch/]

Hoch encountered several obstacles on his trip to Little Rock. He flew into Chicago, where he discovered his flight was canceled, he said. The airline got him, as well as two other runners, to Tulsa, where they found there were no rental cars available. No ride-share service would take them the full distance, either, he said.

According to Hoch, they rented a 15-foot U-Haul in order to make the race.

[Video not showing up above? Click here to watch » arkansasonline.com/1121stone/]

Stone, who called the marathon “the Arkansas race,” said she achieved her goal of winning. This will be her last race as a 42-year-old, she said, as she turns 43 next week.

[Video not showing up above? Click here to watch » youtube.com/watch?v=_lrdOrM30Yc]

The first runner has crossed the finish line in the women's half marathon.

Meghan Lewis of Little Rock, the winner in the women's half marathon on Sunday, finished the race in 1:29.52.

The first runner has crossed the finish line in the men's half marathon.

Cameron Beckett, the winner in the men's half marathon on Sunday, finished the race in 1:11.20.

[Video not showing up above? Click here to watch » youtube.com/watch?v=Zcx71QT21Gs]

Beckett, who is from Little Rock, placed fourth last time he ran the race.

"It’s an honor to place first,” he said.

His motivation for running this year was to raise money for Ruby’s Rainbow. His goal has been to raise $9,000.

His niece, who was born two months ago with Down syndrome, is having open heart surgery on Monday, he said.

The excitement was palpable as the countdown began for runners to begin their trek Sunday at the 19th Little Rock Marathon.

Runners dressed in costumes that included tutus and Alice in Wonderland-themed outfits, such as the King and Queen of Cards.

The marathon typically takes place the first weekend in March, but was postponed due to the covid-19 pandemic, spokeswoman Jamie Moody said.

Moody said she was relieved and excited to be back with a different scenery, however, with fall colors prominent along the course.

[Video not showing up above? Click here to watch » youtube.com/watch?v=5fB98T8j8T0]

EARLIER: 2021 race goes on despite its fall date 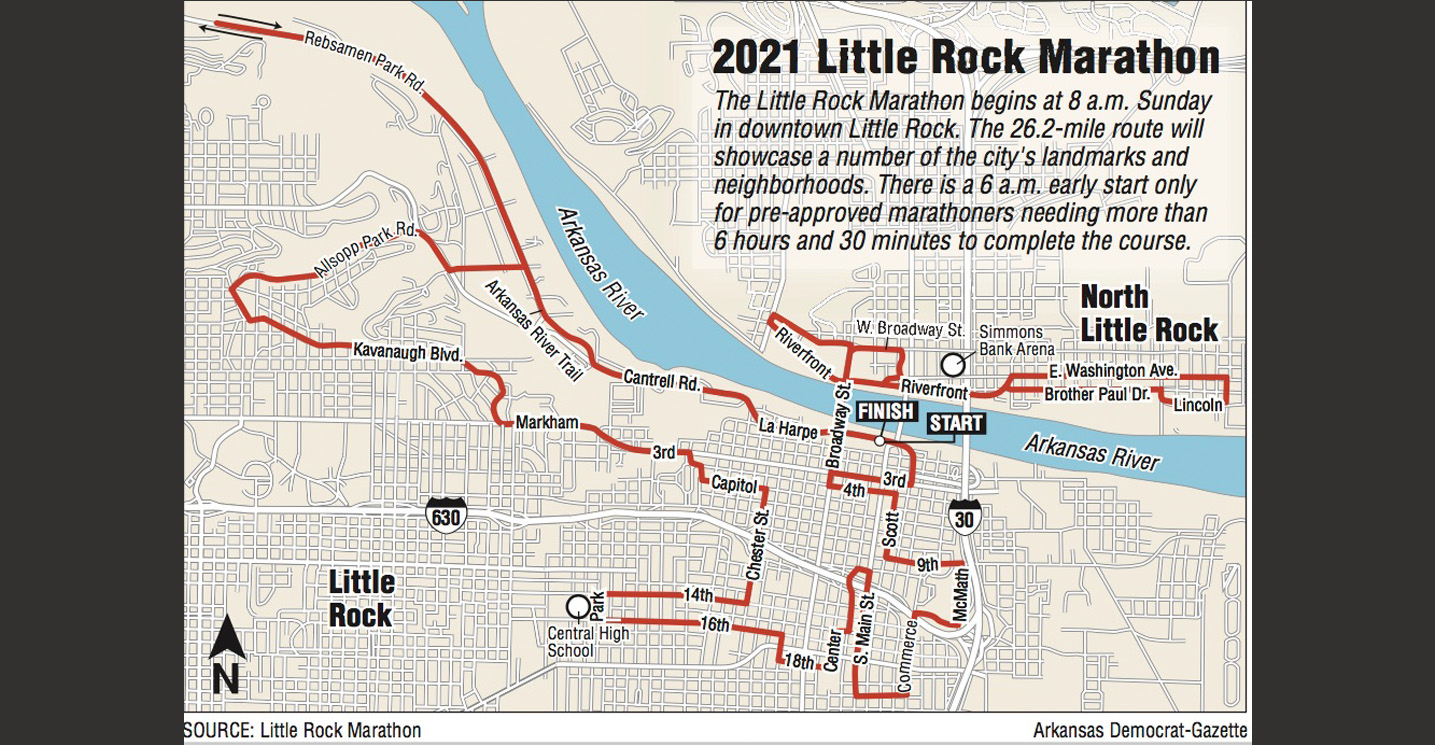 Marathons have remained the same distance for over 100 years, but the people who run them have changed the race ever since.

Examples of the latter will occur for the 19th Little Rock Marathon on Sunday.

With a field limited by covid-19 concern, approximately 1,200 entrants will start the Little Rock Marathon at 8 a.m.

A few of them hope to win. Everyone will want to finish.

The field will wind its way east to the western edge of the Bill and Hillary Clinton National Airport/Adams Field and to the far western turnaround in Murray Park near the Arkansas River. It will pass the Governors Mansion, Little Rock Central High School, the State Capitol, and up the extended ascent on Kavanaugh Boulevard, to the Hillcrest neighborhood. After a steep downhill stretch to the base of Lookout Road, marathoners will race an out-and-back stretch near the Arkansas River into Murray Park and run the last few miles to the finish line near the Little Rock Convention Center.

They will have completed 26-miles, 385 yards, the official marathon distance established by the International Association of Athletics Federations in 1921.

Including entrants in the half marathon, 10K, and 5K, approximately 5,500 to 6,000 competitors will gather downtown to race, with the assistance of several hundred volunteers and the encouragement of several thousand spectators along the various routes.

Tia Stone, 42 of Searcy, is among the few with a chance to win. Stone has finished first among women in four of the last five Little Rock Marathons.

"I would love to win again, but I'd really like to run one of my best times," Stone said. "You never know who's going to show up, or what the competition will be like, so sometimes it helps to alleviate some the pressure for me to just think of what I can control."

Stone will race as a benefactor of the marathon directors' decision to reschedule the race from March because of last winter's surge of the covid-19 pandemic. It did not spare Stone.

"I had covid on January 1," Stone said. "I was really sick. I couldn't do anything for about six weeks."

When the race was rescheduled, Stone adjusted her schedule, too. She followed a summer and early fall of training with a finish in 24 seconds over three hours at the Chicago Marathon on Oct. 10.

Stone fits the physical stereotype of most marathoners from the race's early days, when nearly all who ran marathons were lean, sinewy men genetically predisposed to aerobic excellence. Though they and a handful of women will lead the way, runners of their ilk will appear as the exception in the Little Rock Marathon field.

The majority of men and women in the race will include age groups from teenagers to the elderly in all shapes and sizes. Many will hope for fast times, but most entrants will start with the simple goal to reach the finish line.

Stone said she knows the race is for them, too, a group that will include her 15-year-old son Rocky Stone.

"Friends of his at school are doing it, and he wanted to do it, too, so he'll be out there," she said. "No matter what your pace is, everyone will have a unique experience, and it's fun to hear them."

For some, marathons have become a lifetime hobby.

Husband and wife Jay Wissot, 76, and Alyn Park, 70, of Denver, have finished 92 and 75 marathons, respectively.

They have traveled around the world to race. Both have run at least one marathon on each of the world's seven continents. Park once won the women's division of marathons in Antarctica and South America on the same trip to the Southern Hemisphere.

When she was struck by a rented scooter five months ago in Denver, Park suffered a broken femur. She has only recently started walking comfortably and will attempt to walk the Little Rock Half-Marathon.

"We live downtown in Denver, and there are scooters everywhere," she said. "I got hit by a scooter and was in surgery and blah, blah, blah. That's the scoop on that, so hopefully, I can make it. I can walk now, but I still have a little bit of a limp."

Park and Wissot both have marathon personal records a few minutes over three hours, but Wissott said his wife is far more accomplished than he.

"At age 53, she won the race in Antarctica," Wissot said. "She was beating women in their 20s and 30s, which was a terrific accomplishment. Then, eight days later, we ran a marathon in [Argentina], and she won that one, too."

They each credit their running habit for their travel adventures.

"What we try to do is pick places we want to visit, and then we do something afterward," Wissot said. "We try to run the marathon and then spend a week traveling around or spending time in the place where we did the marathon. That becomes really the incentive and motivation. It's a travel experience as well as a running experience."

Some have used running as a platform to promote specific causes. Among them is Daniel Chaplin, 31, of Birmingham, Ala. Chaplin was born with Down syndrome and said he hopes to help dispel misconceptions of his condition through races. He has entered Sunday's half-marathon as part of his pursuit.

"It is my mission to work for Down syndrome awareness," Chaplin said.

Chaplin completed a 5K in his first race attempt. He has since completed at least two half marathons with a personal record of 3 hours, 14 minutes, 40.5 seconds.

"It is emotional for me to talk about this," he said. "I never thought I would be able to do this."

Jenn Miller, 47 of Kenosha, Wis., will lead the final group, each of whom hopes to finish under eight hours. Miller, the daughter of longtime Little Rock Marathon training leaders Hobbit and Tom Singleton, has enlisted the help of her husband Darren Miller, 61, and daughter Emme Miller, 16.

"It's important that you know you can finish the marathon comfortably at that pace," Miller said. "People use [pacers] sort of as their bunny. They know they either have to stay with you or ahead of you. I don't know that pressure is what I feel, but I feel responsible. People have marathon goals, and as a pacer, you're part of helping them meet that goal."

Stone, who won the 2018 race in 2:59:13, said she hopes to repeat her sub-three-hour performance. She knows her goal is different from those of most entrants, but she said each runner and walker in the marathon will have one.

"I think everyone should have their own running goals, whether it's time or completion or the experience," Stone said. "Sometimes I have run races to see a new city, and I know Little Rock gets many out-of-town or out-of-state visitors. People run marathons for many different reasons."

This story has been updated. It was originally published at 7:46 a.m. 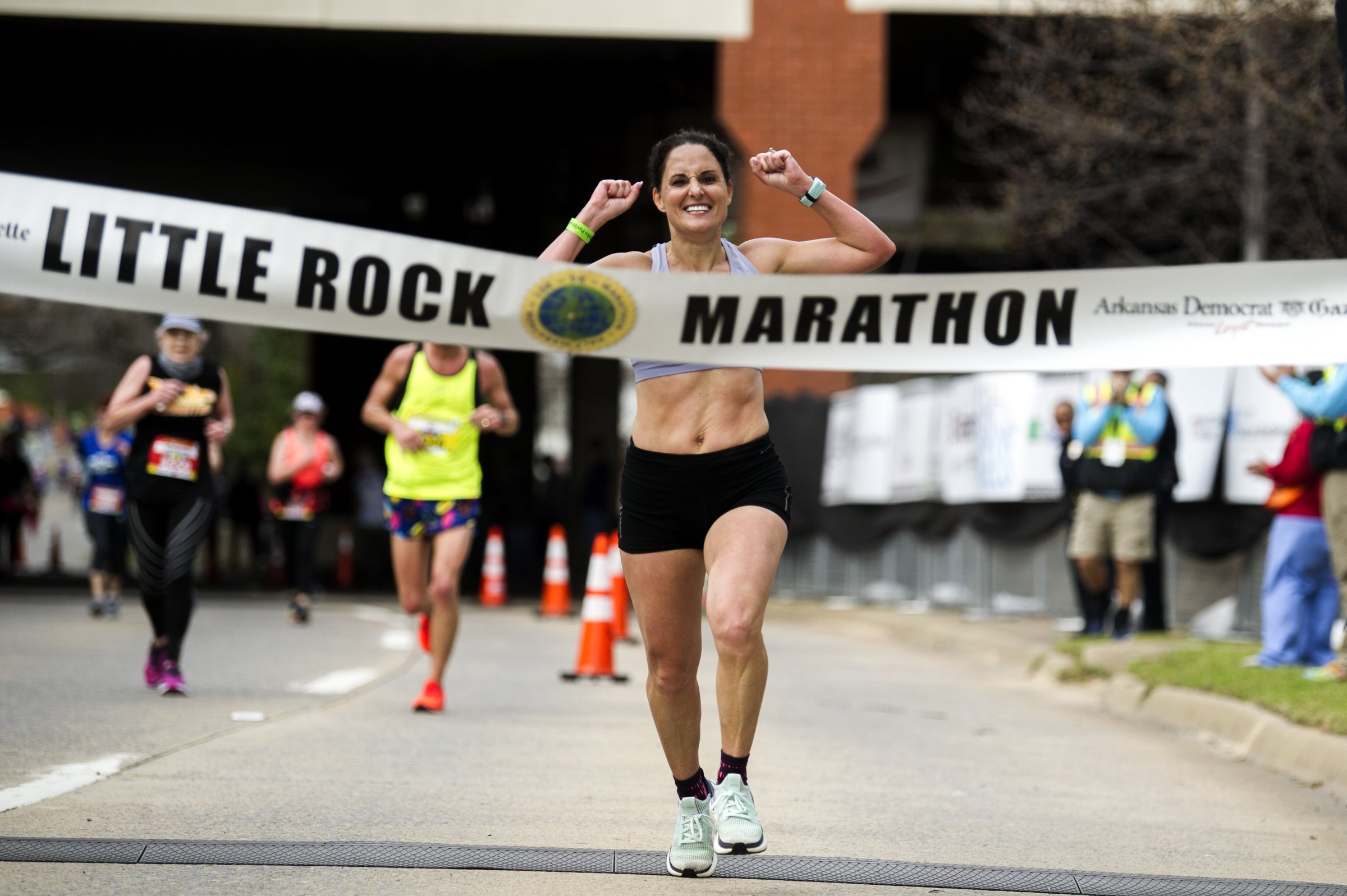 Tia Stone of Searcy crosses the finish line as the women’s champion at the 2020 Little Rock Marathon. Stone said she was sidelined with covid-19 early this year, and the decision to postpone the race from March will allow her to compete today. (Arkansas Democrat-Gazette/Stephen Swofford)