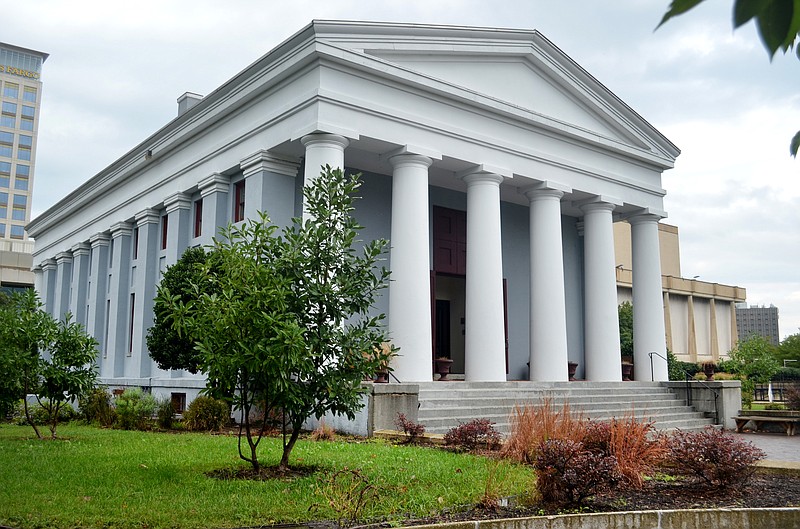 The Old Norfolk Academy Building on St Paul’s Boulevard in Norfolk, Va., was designed by Thomas U. Walter, known for his design of the U.S. Capitol dome. (The Washington Post/James Lee)

Catastrophe struck on Jan. 1, 1776. British naval forces bombarded patriot-occupied Norfolk, Va., engulfing much of the waterfront in flames. Colonial militias, in turn, set fire to loyalist properties. All that was left standing were the brick walls of St. Paul's Church (1739), where today a British cannonball remains embedded in the church wall.

That destruction left a blank canvas on which to rebuild.

My wife, Carol, and I visited Norfolk recently to check out that canvas. We limited ourselves to the neighborhoods around East and West Freemason streets, where a dazzling array of architectural styles trace the redevelopment of the coastal Virginia city.

Because we can't tell a cornice from a lintel, we asked Norfolk architect Greg Rutledge to guide us through the West Freemason Street Area Historic District. Rutledge knows the neighborhood well, having led architectural walks here in the past.

"It's a 3-D textbook of architecture," he said.

The neighborhood — a compact 14-block area that includes West Freemason, West Bute, Botetourt, Dunmore and Yarmouth streets — is on the National Register of Historic Places. This area started as a summer retreat for wealthy people escaping downtown Norfolk, and later it became a fashionable part of town.

After meeting Rutledge at the corner of West Freemason and Duke streets, we started our walk heading west on West Freemason. It was an overcast but warm fall day. Cars passing by rumbled on the cobblestone streets. Towering oaks, plane trees and sycamores lined the herringbone-brick sidewalks.

We found a great example of Queen Anne style, popular in the late 1800s, at 246 W. Freemason St. Its bay windows, steeply pitched roof and conical tower topped with a "witch's cap" are dead giveaways, according to Rutledge. Just underneath the cap is a recessed porch with a railing, perfect for reading a book.

Several doors down, we lingered at the elegant Camp-Hubbard House at 308 W. Freemason, a white-brick, two-story Greek Revival house built in 1852. Greek Revival was popular in the United States before the Civil War and drew from classical Greek temples. Clues here include four Ionic columns supporting the portico, multipaned windows and lintels decorated with acanthus leaves, rather than the keystone lintels of the Federal period.

The neighborhood includes an example of Beaux-Arts Classical design in the circa-1904 old Norfolk Public Library building at 345 W. Freemason. This grandiose style, popular in the United States from about 1880 to 1930, emulated classic Greek and Roman architecture and was usually used for public buildings, such as libraries. Four massive columns support the triangular front pediment (gable), and large windows let in plenty of light. Engraved just below the roof line are the names of ancient writers such as Homer, Virgil and Sophocles.

Every block held a delightful surprise: an exquisitely carved Corinthian capital, or a terra-cotta Greek vase adorning a wall. Carol loved the side gardens awash in fall flowers.

Near the corner of West Freemason and Botetourt streets, the Selden House, built in 1807, is one of the original summer houses dating from the time when this area was still countryside. Rutledge noted that the body of the house is in the symmetrical Federal style, with a central front door and nine-on-nine pane windows. Colonial Revival and Greek Revival touches can be seen in its dormers and other roof projections.

Diagonally across the street, the magnificent John Cary Weston House (1870) won our hybrid award for melding of styles, and Rutledge helped us decipher it. It has a complex Queen Anne-style roof steeply pitched with dormers and a wide Italianate cornice supported by heavy brackets. We also noted the carved bricks forming the arches over the windows, and the fancy ironwork on the wraparound porch.

Around the corner, the house at 414 W. Bute St., built in 1889, offers a gaudy example of brick Colonial Revival, still the most popular style in the country. It has a bow front and six-pane over one-pane windows. Colonial Revival is known for its decorative entrances, and this one goes over the top: At the entrance, eight Ionic columns support a scroll-like portico on top of which eight Corinthian columns hold up a flat portico.

On the corner of Yarmouth and West Bute streets is one of the few wooden houses in the district, the circa-1880 Perry House, built in the Second Empire style, which was popular in the mid-19th century. The blue clapboards with white trim stand in contrast to the brick houses around it. A massive mansard roof with dormers, tall windows and paired doors at the above-grade entrance all indicate Second Empire. "I could stare at this house all day," Rutledge said.

Housing styles, like clothing, go in and out of fashion. This is nowhere more apparent than at the Addington-Petty-Dickson House on the corner of West Freemason and Yarmouth streets. Originally a two-story brick house built in a Greek Revival style in 1852, it gained a mansard roof with dormers in the 1870s to reflect the Second Empire style that was all the rage at that time.

At 259 W. Bute St., we saw one of the best examples of a three-story Italianate townhouse in Norfolk. The house, built in 1890, reminded me of a mocha birthday cake. Rutledge pointed out the hierarchy, with the height of each floor diminishing as you go up. The rich ornamentation over the windows and doors was like the frosting on the cake.

We said goodbye to Rutledge at the red-brick Richardsonian Romanesque Hunter House, built in 1894 and now home of the Hunter House Victorian Museum. This is one of the most American of styles developed by the architect H.H. Richardson, with arched entrances, rounded arch widows, short columns and heavy masonry work.

Our first stop was the circa-1792 Moses Myers House, home to five generations of the Myers family and, like the Hunter House, open to the public. We could tell it was Federal style by the symmetrical design with porticos supported by Ionic columns, fanlights over the doors and keystone lintels. There is a large circular half window on the attic level.

Our eyes were immediately drawn across the street to the stuccoed brick Freemason Street Baptist Church, designed by Thomas U. Walter in the Gothic Revival style and built in 1848. The church's soaring 150-foot octagonal steel spire, which rises from a masonry bell tower, is breathtaking. Smaller spires line each side of its steeply pitched roof. Walter also designed the U.S. Capitol dome.

Another Walter building on St. Paul's Boulevard, the circa-1840 former Norfolk Academy, is an outstanding example of Greek Revival architecture, with six massive Doric columns supporting a portico modeled after the Temple of Hephaestus in Athens. Today, it is the home of the Hurrah Players theatrical group. A historical note: Edgar Allan Poe gave his last public reading here shortly before his death in 1849.

On our way to check out the cannonball at St. Paul's, we stopped at the Willoughby-Baylor House at 601 E. Freemason, a Federal-style brick townhouse built in 1794. The boxlike exterior of this two-story, three-bay building is quite plain, but has a simple elegance. Its Greek Revival Doric columns were probably added in the 1820s.

We ended our walk at St. Paul's Episcopal Church, the remaining vestige of colonial Norfolk. The cruciform brick church, with a large circular window over its entrance, sits in a quiet church graveyard shaded by enormous live oaks and magnolias. We looked up at the softball-size cannonball lodged in the Flemish-bond brick wall of the church, a symbol of Norfolk's fiery destruction.

Everything we had just seen rose from those ashes.

A boutique hotel in Norfolk's historic Neo-Classical Royster Building, notable for its Roman Doric pilasters (columns) and elaborately carved terra-cotta top. The hotel is connected to a glass studio next door. Glass artwork adorns the hotel's 113 guest rooms and hallways. Parking is in a public garage. Rooms from $195 per night.

A bed-and-breakfast with eight rooms and suites, located in Norfolk's Ghent neighborhood. Built in 1899 for the Page family, this Georgian Revival house has king-size beds and en suite bathrooms. Child guests must be 15 or older. Continental breakfast offered. No pets allowed. Rates from $175 per night.

This 23-story Hilton has 300 guest rooms in downtown Norfolk and offers three restaurants, including a rooftop beer garden, indoor pool and 24-hour fitness center. Self-parking on-site. Rooms from $178 per night.

An upscale restaurant that offers traditional Italian food. Back patio and rooftop dining are available. Business casual dress is preferred. Opens daily at 4 p.m. Entrees from $19.

The museum contains the original furnishing of two generations of the upper-middle-class Hunter family, who lived in the house from 1894 to 1965. Open Wednesday-Saturday 10 a.m.-4 p.m. April through December. Guided tours at noon and 2 p.m.; self-guided tours at 11 a.m., 1 p.m. and 3 p.m. Advance reservations required. Free.

The Myers House contains the furnishings, artifacts and clothing of five generations of the Myers family, the only family to occupy the home. Moses Myers was a wealthy merchant, and his was the first Jewish family to settle in Norfolk permanently. The museum is operated by the Chrysler Museum of Art. Open Saturday and Sunday noon-5 p.m. Free.