Thousands of people march in Vienna, other cities in Europe by Compiled Democrat-Gazette Staff From Wire Reports | November 21, 2021 at 4:28 a.m. 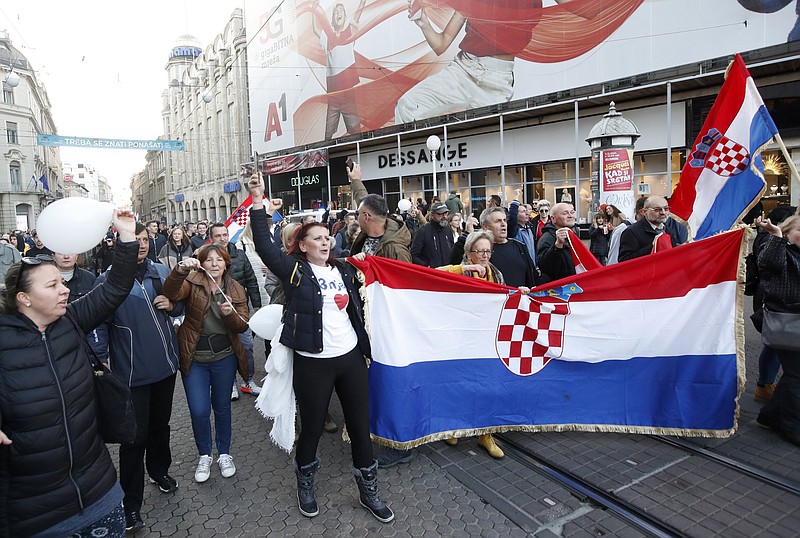 People march down a street during a protest against vaccination and coronavirus measures in Zagreb, Croatia, Saturday, Nov. 20, 2021. Thousands of protesters gathered in Zagreb on Saturday after earlier this month the authorities introduced more restrictive measures to fight the surge of coronavirus infections in the country. (AP Photo)

VIENNA -- Tens of thousands of protesters, many from far-right groups, marched through Vienna on Saturday after the Austrian government announced a nationwide lockdown beginning Monday to contain skyrocketing coronavirus infections.

[Video not showing up above? Click here to watch » arkansasonline.com/1121eucovid/]

Demonstrations against virus restrictions also took place Saturday in Switzerland, Croatia, Italy, Northern Ireland and the Netherlands, a day after Dutch police opened fire on protesters and seven people were injured in rioting that broke out in Rotterdam.

The Austrian lockdown will start Monday and comes as average daily deaths have tripled in recent weeks and hospitals in heavily hit states have warned that intensive care units are reaching capacity. The lockdown will last at least 10 days but could go up to 20, officials said. People will be able to leave their homes only for specific reasons, including buying groceries, going to the doctor or exercising.

The government also will make vaccinations mandatory starting Feb. 1. Not quite 66% of Austria's 8.9 million people are fully vaccinated, one of the lowest rates in Western Europe.

Among those protesting were members of far-right and extreme-right parties and groups, including the far-right Freedom Party, the anti-vaccine MFG party and the extreme-right Identitarians.

About 1,300 police officers were on duty and 35,000 protesters participated in different marches across the city, police said. Police said several protesters were detained, but didn't give specific numbers. Later Saturday night, protesters threw bottles and beer cans and fired pyrotechnics at police, who then used pepper spray to disperse the crowds.

Freedom Party leader Herbert Kickl, who recently tested positive for covid-19, appeared via video, denouncing what he called "totalitarian" measures from a government "that believes it should think and decide for us."

Chancellor Alexander Schallenberg apologized Friday to all vaccinated people, saying it wasn't fair they had to suffer under the renewed lockdown restrictions.

"I'm sorry to take this drastic step," he said on public broadcaster ORF.

In neighboring Switzerland, 2,000 people protested an upcoming referendum on whether to approve the government's covid-19 restrictions law, claiming it was discriminatory, public broadcaster SRF reported.

A day after the Rotterdam rioting, thousands gathered on Amsterdam's central Dam Square, despite organizers calling off the protest. They walked peacefully through the streets, closely monitored by police.

"This policy [anti-coronavirus measures] makes a lot of conflicts between the people," Hugo Gietelink from Amsterdam told The Associated Press. "I think it is very important that the vaccinated and non-vaccinated have to make a friendship again."

"We certainly don't support what happened in Rotterdam. We were shocked by it," he said.

In Italy, 3,000 people turned out in the capital's Circus Maximus, a field where in ancient times Romans staged popular entertainment, to protest against "Green Pass" certificates required at workplaces, restaurants, cinemas, theaters, sports venues and gyms, as well as for long-distance train, bus or ferry travel.

"People like us never give up," read one banner, in the red, white and green colors of the Italian flag. Almost no one wore a protective mask.

In Northern Ireland, several hundred people opposed to vaccine passports protested outside the city hall in Belfast, where the city's Christmas market opened Saturday -- a market where proof of vaccination or a negative covid-19 test was required.

Some protesters carried signs that have been widely criticized as offensive, comparing coronavirus restrictions to the actions of Nazi Germany.

In Croatia, thousands gathered in the capital of Zagreb, carrying flags, nationalist and religious symbols, along with banners against vaccination and what they describe as restrictions of people's freedoms.

In France, Interior Minister Gerald Darmanin condemned violent protests in the Caribbean island of Guadeloupe, one of France's overseas territories.

Darmanin said 29 people had been detained by police overnight. Authorities were sending 200 more police officers to the island and will impose Tuesday a nightly curfew from 6 p.m. to 5 a.m.

Police said two rioters were hospitalized after being hit by bullets, and investigations were underway to establish if they were shot by police. The condition of the injured rioters was not disclosed.

Officers arrested 51 people, about half of them minors, police said Saturday afternoon. One police officer was hospitalized with a leg injury suffered in the rioting, another was treated by ambulance staff and "countless" others suffered minor injuries.

Mayor Ahmed Aboutaleb told reporters in the early hours of Saturday morning that "on a number of occasions the police felt it necessary to draw their weapons to defend themselves" as rioters rampaged through the port city's central shopping district, setting fires and throwing rocks and fireworks at officers.

"They shot at protesters, people were injured," Aboutaleb said. He did not have details on the injuries. Police also fired warning shots.

An independent investigation into the shootings by police was opened, as is the case whenever Dutch police use their weapons.

The government has said it wants to introduce a law that would allow businesses to restrict the country's coronavirus pass system to only people who are fully vaccinated or have recovered from covid-19 -- that would exclude people who test negative.

The country has seen record numbers of infections in recent days and a new partial lockdown came into force a week ago.

Information for this article was contributed by Emily Schultheis, Kirsten Grieshaber and Mike Corder of The Associated Press. 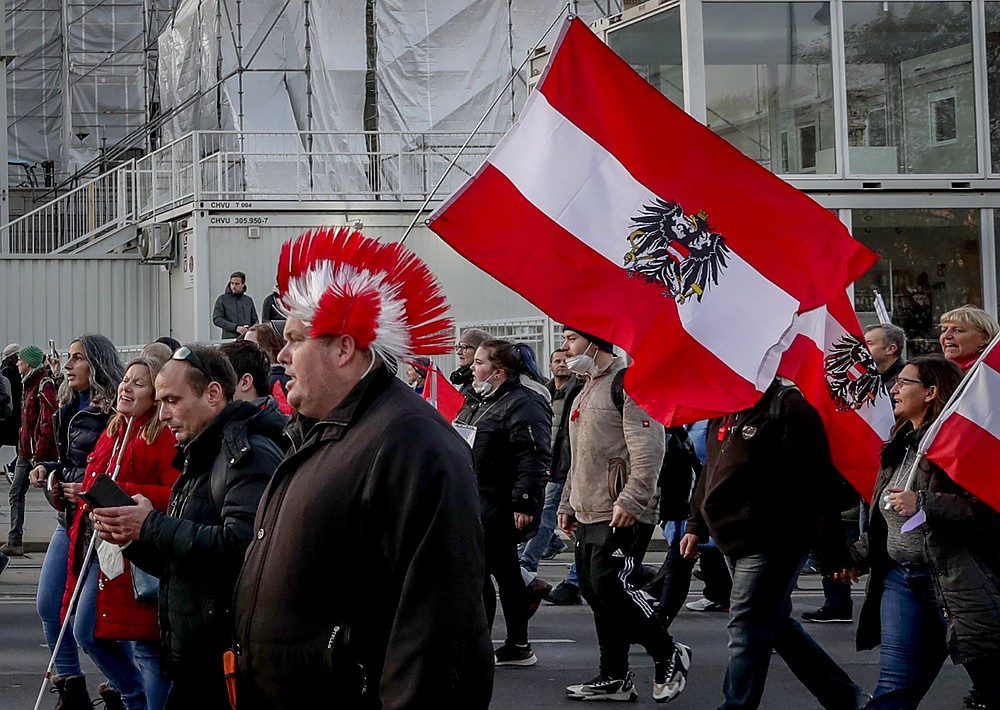 People walk past the parliament as they take part in a demonstration against the country&#x27;s coronavirus restrictions in Vienna, Austria, Saturday, Nov.20, 2021. Thousands of protesters are expected to gather in Vienna after the Austrian government announced a nationwide lockdown to contain the quickly rising coronavirus infections in the country. (AP Photo/Lisa Leutner)