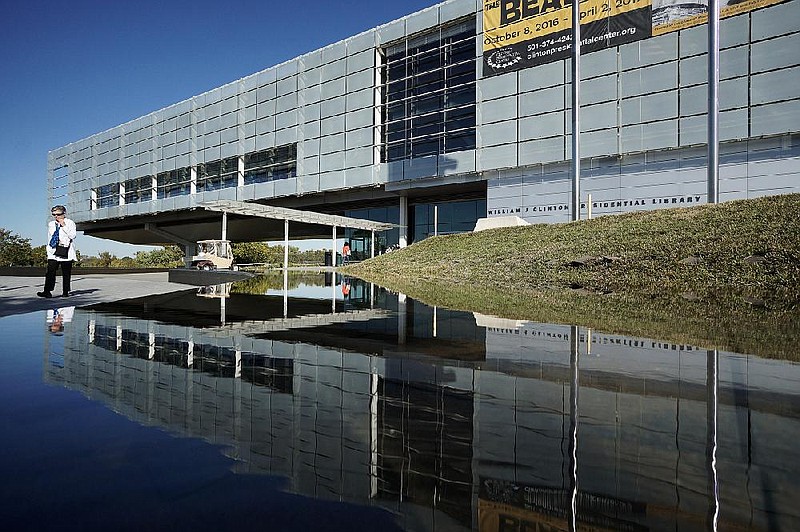 The Clinton Presidential Center in Little Rock is reflected in the pool out front in this Thursday, Nov. 10, 2016, file photo. (Arkansas Democrat-Gazette file photo)

Contributions and grants to the Bill, Hillary and Chelsea Clinton Foundation dropped by millions in 2020 to the lowest amount in at least a decade, according to Internal Revenue Service filings.

“While 2020 brought urgent needs to address from the pandemic and a deepened focus on diversity, equity, and inclusion; it also was a difficult year for philanthropy,” Kevin Thurm, CEO of the Clinton Foundation, wrote in an open letter. “Across the sector, resources were stretched thinly and fundraising activities were impacted.” The foundation operates the Clinton Presidential Center in Little Rock, but is also involved in an array of efforts on topics like economic development, education and climate change.

The organization’s assets are strong, and the nonprofit still holds a “very large” endowment, said Leslie Lenkowsky, a professor emeritus at Indiana University who studies philanthropy. But, he noted, contributions and grants continue to trend down in general for the nonprofit.

“This has been underway for a while. I think it largely reflects the fact that the Clintons are less prominent these days and their ability to raise funds has been affected by that,” he said.

The Clinton Foundation, he said, can be loosely characterized as a “celebrity foundation,” where a lot of the organization’s draw is generated by the fame of the people involved.

[DOCUMENT: Read the Clinton Foundation's filing with the IRS for the 2020 tax year » arkansasonline.com/1121cf990/]

“Athletes have them. Movie stars have them. Other politicians have them. And so you’d expect to see a sharp decline as the celebrity factor starts to wane,” Lenkowsky said.

Total charitable giving rose by 3.8% last year when adjusted for inflation, according to a report published by the Giving USA Foundation that looks at giving to charitable organizations nationwide. Increases in contributions went to education, human services and “public-society benefit organizations,” among other areas.

[Interactive chart not showing up above? Click here » arkansasonline.com/1121clintons/]

Laura MacDonald, chairwoman of Giving USA Foundation, has described last year as the highest year on record for charitable giving, even with the coronavirus pandemic. However, she has also characterized the country’s economic landscape as mixed.

“It is important to recognize that the picture for individual households and organizations may have looked quite different, with many facing hardship even though total giving posted strong growth,” she said in a statement earlier this year.

At the Clinton Foundation, expenses and revenue were both down compared with 2019. The foundation reported $29 million in total revenue and $39.5 million in expenses for last year, listing a shortfall of about $10.6 million.

Thurm, the foundation’s CEO, wrote in the letter that the nonprofit’s work last year had been “fully funded” through donations and returns from the endowment.

The foundation built an endowment so that its programs could continue and to ensure the organization’s long-term financial health, a spokesman said.

The national increase in charitable giving did not appear to rub off on the Clinton Foundation. The wealthy donated funds more locally during the pandemic, said Nicole Esparza, a professor of nonprofit leadership and philanthropy at the University of Southern California.

One study found that the wide majority of affluent households maintained or increased their giving. Of the affluent households that donated to organizations providing basic needs, more than a third increased their spending to those entities in 2020 as the nation grappled with the pandemic, according to research from the Indiana University Lilly Family School of Philanthropy.

“In some ways, 2020 is a story of uneven impact and uneven recovery,” said Amir Pasic, dean of the school, in a statement earlier this year. “Many wealthier households were more insulated from the effects of covid-19 and the ensuing economic shock.” The foundation’s net assets rose from $312.8 million at the beginning of 2020 to $323.4 million at the end of the year, according to the IRS filings. The total net asset figure includes the foundation’s endowment and liabilities held by the organization.

The filings did show growth in the nonprofit’s endowment. The foundation’s endowment had a 2020 end-of-year balance of $235.1 million, an increase compared with the $217 million figure for that time in 2019.

The nonprofit also dramatically increased the amount of grant money it doled out, giving $4.2 million compared with $1.8 million in 2019.

The Clinton Presidential Center pulled in more than $400,000 last year, according to the filings, which say center expenses came in at $11.8 million, including $1.2 million in grants.

In the beginning, the nonprofit was focused on raising money to construct the presidential center. The organization’s mission later broadened to include topics like childhood development and international economic development.

With the coronavirus pandemic, the nonprofit shifted its work and focused on addressing inequities made worse by the public health crisis, Thurm wrote.

“These new and expanded efforts were critical in a year defined by the pandemic,” Thurm wrote.

The nonprofit coordinated with others on a feeding program that gave out more than 700,000 meals. The presidential center served as a backdrop for the effort with food being prepared in facility kitchens and meals being packaged in the great hall ballroom.

“Last year, as the pandemic forced the Clinton Center to suspend most of our in-person operations, we redirected our staff and our resources to meet the most pressing needs in our community,” said Stephanie Streett, executive director of the foundation.