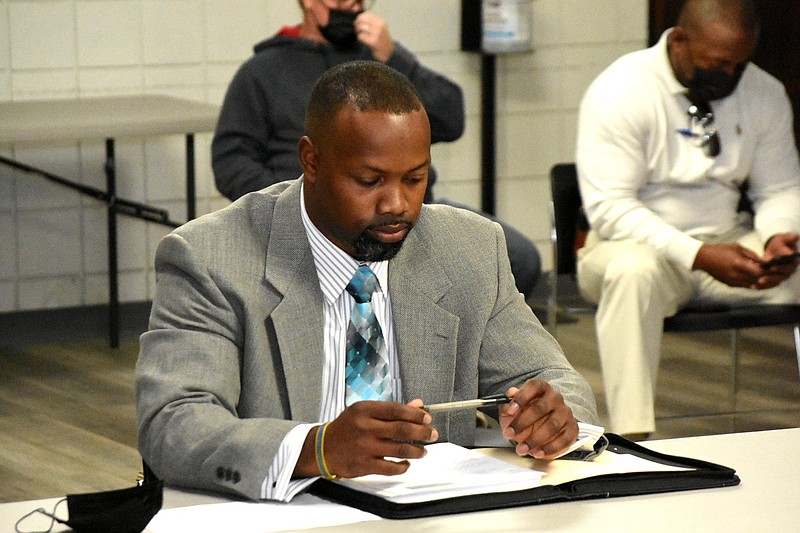 Editor's note: The graphic subject matter of this story may not be suitable for all readers.

Christopher Sweeny apologized for lewd conduct at a casino that led to his Nov. 2 firing as a Pine Bluff police detective during a 51-minute appeals hearing inside the City Council chambers Friday.

Seeking reinstatement, Sweeny testified before a three-person personnel review committee, saying his actions inside Saracen Casino while off duty on Sept. 8 don't rise to the level for his dismissal. Sweeny admitted to pulling down a female bartender's blouse and licking her breasts, but denied having sex with her in the men's bathroom, allegations Sweeny said security guards made.

"I just want to apologize for my actions," Sweeny said, speaking softly. "I know they were wrong. I was just having a good time, enjoying myself, drinking and something happened that shouldn't have happened. I take full responsibility for what happened. My sincere apologies for what happened. For my discipline, for being terminated, to me, that was extreme. I feel like the crime didn't fit the punishment, and all I want is for this decision to be fair."

Dominique Lane, the Pine Bluff assistant city attorney who heads the personnel committee, asked Sweeny what he specifically was apologizing for, and Sweeny responded: "For licking the breasts at the casino, at the bar."

"And you believe this behavior is inappropriate for an officer?" Lane said.

"It's not appropriate?" Lane asked.

"Do you believe that conduct is unbecoming of an officer?" Lane asked.

Sweeny testified that the act was consensual.

Lane said allegations of sexual acts between Sweeny and the employee, whom he said has been terminated, inside a men's restroom were not founded because there is no definitive proof, and therefore he was terminated specifically for the act at the bar.

"However, the conduct that initiated all of this, which occurred in the bathroom, I believe is relevant here because this is how it got started," Lane said. "But there were inconsistencies in the report in the investigation conducted by internal affairs with the person that was in the bathroom with you and what you said happened yourself. There were inconsistencies, not to mention the testimony of the two security guards put a lot of doubt around what happened in the bathroom."

Interim Police Chief Lloyd Franklin Sr. testified that "not a lot" of what reportedly occurred inside the bathroom went into his decision to fire Sweeny, but mainly the act at the bar.

Sweeny apologized for the female going into the men's restroom with him, but denied allegations from security guards at the casino.

"Nothing happened in the restroom," Sweeny said.

The committee – which also includes Parks and Recreation Director Samuel Glover and code enforcement officer Patrick Lockett – did not vote whether to uphold the firing. Lane informed both parties that a decision would be made within 10 days of the hearing.

"When I talk about the culture taking place within the Police Department, I want to be clear the majority of our police officers who work for the Pine Bluff Police Department are very good officers," Franklin said. "They're conscientious. They understand what that term means, conduct unbecoming of an officer, and it goes into part of what the training officers are taught."

Lane said, according to files she and the committee received, Sweeny clearly stated in an interview that he did not believe he did anything wrong, although Sweeny apologized Friday for the oral act. Lane asked the former officer what had changed.

"So, you were trying to avoid something that would lead to termination?" Lane asked.

"I didn't think termination was even a part of it," Sweeny answered. "I was just thinking suspension."

Receiving suspension without pay would be a fair punishment, Sweeny said, adding that termination was "extreme."

Lockett asked if the bartender led Sweeny on and encouraged his behavior.

When Lane asked if drinking may have contributed to a lack of judgment, Sweeny answered in the affirmative. He admitted to consuming four or five mixed drinks after having worked 24 hours into the middle of the week.

"That's a stress reliever," Sweeny said, noting that he hadn't been out in a long time. "That's why we go to drink. The time was like 2 in the morning, it wasn't a lot of people in the casino. Also, she didn't complain. Nobody around us complained. The casino complained. That's why we're here now."

Toward the end of the hearing, Sweeny testified that he was not intoxicated.

Asked what he would do differently, Sweeny answered: "If I'm reinstated, any training or seminars I need to take, I'll take them. I just won't go drink and have a good time in public anymore. That's what ended up to me doing what I did that night at the casino."

Franklin told committee members that if Sweeny is reinstated, he would soon be back before them on another offense. Sweeny's previous record played a small role in Franklin's determination to fire him, he said.

"The only thing I'm asking you is to not make pulling down a lady's blouse and sucking on her breasts acceptable behavior," Franklin said. "Where do we draw that line at?"

Lane told Franklin that his assistant chiefs recommended that Sweeny be suspended for his actions but not terminated.

"I really feel bad about that," Franklin said. "I deal with people out in the public who have feelings about the Pine Bluff Police Department, and most of them are not good. One of the things I think that's been happening in some of the cases is, because we're short of employees, they think the can get away with anything. 'We need to keep so-and-so. He did this. He did that.' I'm disappointed. I really am, and it probably doesn't matter to them whether I'm disappointed or not. But, I'm telling you, at some point, the culture is going to have to change within the Pine Bluff Police Department. We cannot continue to allow officers to do some of the things that's being done, and we just suspend them two or three days because if we lose him, we're going to lose another other.

"The majority of the Pine Bluff Police Department are excellent officers. They do hard work."

Lane interrupted and asked: "Would you consider officer Sweeny one of those excellent officers?"

The Commercial has filed a Freedom of Information Act request with the Police Department for personnel files and officer statements related to Sweeny's discipline, as well as video reportedly showing the alleged misconduct. The video was not shown during the hearing.

Glover asked Sweeny if he felt that the standard of moral excellence as a "24-7" police officer is unreasonable.

Sweeny said he's a police officer to help people who can't help themselves, help make Pine Bluff safer and "be a role model for kids who look like me." 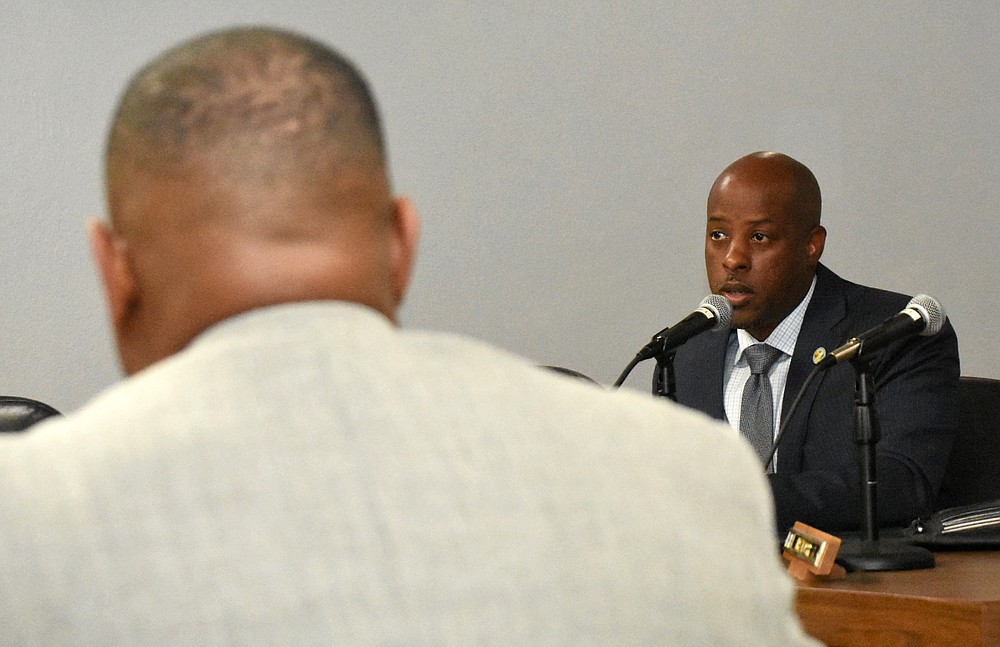