Glass' heroics prove too much for UAPB in season finale 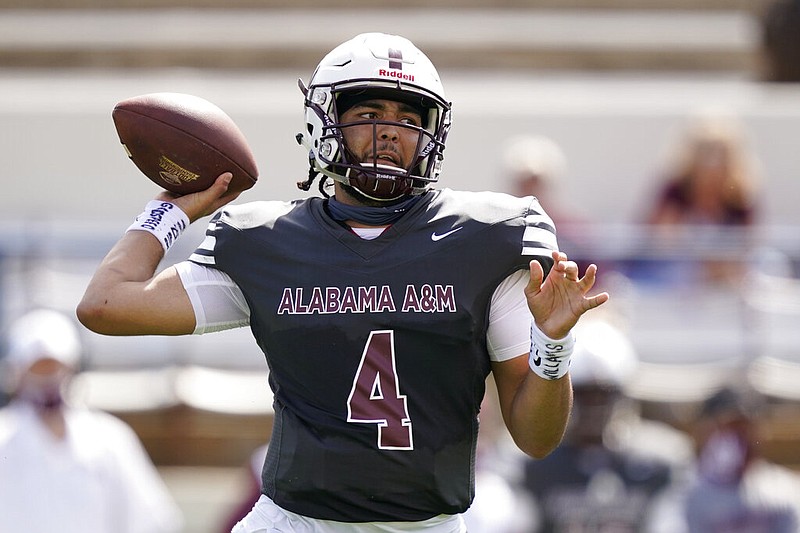 Alabama A&M quarterback Aqeel Glass (4) passes against Arkansas-Pine Bluff during the first half of their Southwestern Athletic Conference college football game in Jackson, Miss., in this May 1, 2021, file photo. (AP/Rogelio V. Solis)

Aqeel Glass wrapped up a storied career at Alabama A&M University with another big game against the University of Arkansas at Pine Bluff.

More than six months removed from a conference championship triumph over UAPB, Glass threw for 450 yards and six touchdowns Saturday in leading the Bulldogs to a 52-24 victory before 4,311 at Louis Crews Stadium in Huntsville, Ala.

The Golden Lions (2-9, 1-7 Southwestern Athletic Conference) took a colossal fall from the top of the Western Division in the spring and lost two straight to end the season. They suffered through a seven-game slide before beating Grambling State University two weeks ago, but they struggled defensively against Florida A&M University last week and Alabama A&M.

Glass, the reigning SWAC Offensive Player of the Year and Offensive Player of the Week, surpassed the 400-yard mark for the fifth time this season and set a season high in touchdown passes. Glass finished the season with 3,568 yards and 36 touchdowns, but the graduate student from St. Louis also set a season high in completion rate against the Golden Lions, connecting on 26 of 33 passes for 78.8%.

Two Bulldogs surpassed the 100-yard mark in receiving yards -- Odieu Hilaire with 162 and a touchdown on 8 receptions, and Abdul-Fatai Ibrahim with 115 and 2 touchdowns on 7 catches.

The Lions totaled 436 yards of offense, led by Skyler Perry's 22-for-42 passing for 220 yards and a touchdown, and graduate student Kierre Crossley's 131 yards and a TD on 22 carries. Perry rushed 13 times for 85 yards, including a 30-yard touchdown bolt early in the second half.

The Bulldogs led 14-0 through the first quarter after Glass threw short touchdown passes to Dee Anderson and Ibrahim.

UAPB's Josh Wilkes pulled down a 17-yard touchdown pass from Perry on a crossing route just 50 seconds into the second quarter, but Hilaire made the score 21-7 with a long run after the catch for a 62-yard touchdown at the 12:40 mark.

Crossley's touchdown run came with 8:10 left before halftime, and UAPB was within 21-14. The Lions would come no closer.

A 3-yard kickoff that went out of bounds allowed the Bulldogs to set up shop at the Lions' 38 for their next drive. Four plays later, Bryson Clark had a 16-yard touchdown pass from Glass on second-and-3 for a 14-point lead.

Zack Piwniczka cut into the margin with a 30-yard field goal, but Ryan Morrow's 1-yard run gave the Bulldogs a 35-17 halftime lead. Glass then threw a 19-yard scoring pass to Ibrahim and 53-yard toss to Zabrian Moore.

Corey finished the scoring with a 24-yard field goal early in the fourth quarter.

Glass for his six touchdown passes and making a case for a third Player of the Week honor this season.

Both SWAC finalists from the spring head into the offseason.