Is there still Sex in the City? Candace Bushnell takes the stage in her autofiction novel-turned-show 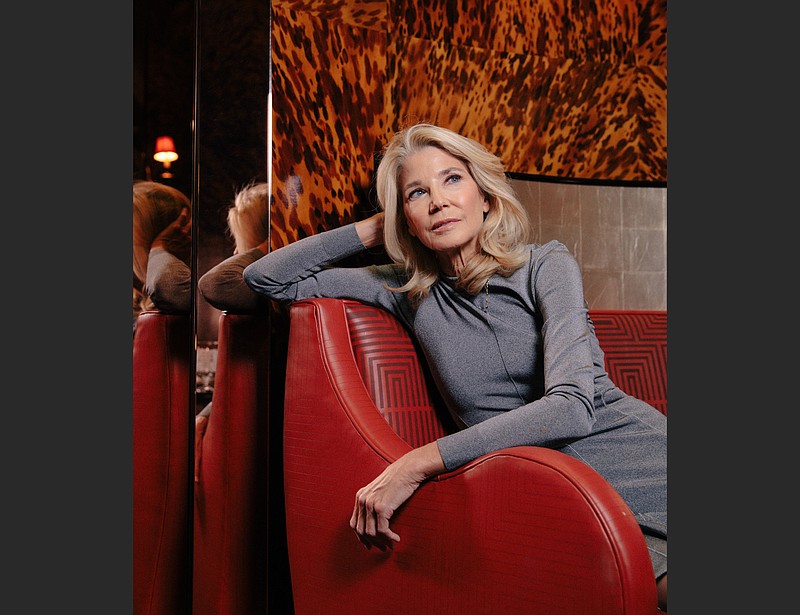 Candace Bushnell relaxes in a chair in New York on Nov. 4. The writer maps her life in a one-woman show, “Is There Still Sex in the City?” It began previews Nov. 13 at the Daryl Roth Theater. (Celeste Sloman/The New York Times)

After a long day of rehearsal in 5-inch heels and a photo shoot at which she posed atop, bestride and semi supine on a corner banquette, Candace Bushnell — the woman who made the cosmopolitan the most famous drink of pre-Y2K New York — slipped into a chair in the gallery of the Carlyle Hotel and ordered an unglamorous pot of Earl Grey tea. With slices of lemon to soothe her throat.

Bushnell, 62, broke out in the mid- '90s as a sex and relationship columnist for the New York Observer, centering her columns on a character named Carrie Bradshaw, a chic stand-in for Bushnell herself. She collected those pieces into a spiky 1996 book, "Sex and the City," autofiction before it was cool. HBO premiered a series adaptation two years later. It ran for six seasons. Two movies followed, as did licensed fragrances, bus tours and candy.

Bushnell's life diverged from Carrie's. She turned her talents to fiction. Her marriage to ballet dancer Charles Askegard, whom she nicknamed Mr. Bigger, ended in divorce. After fleeing Manhattan for the Hamptons and despairing of dating, she wrote another novel, "Is There Still Sex in the City?"

I couldn't help but wonder: Has Bushnell adapted that novel into a one-woman show? She has. In "Is There Still Sex in the City?," which began previews at the Daryl Roth Theater on Nov. 13, Bushnell makes her stage debut, tracing her life — like a fever chart plotted in tasteful pink lipstick — from her Connecticut childhood to her party girl pinnacle to marriage, divorce and beyond. Is this fiction, auto- fiction, memoir?

"I'm not trying to play a character," she told me. "But I have a feeling that maybe I am a character. Like kind of naturally." 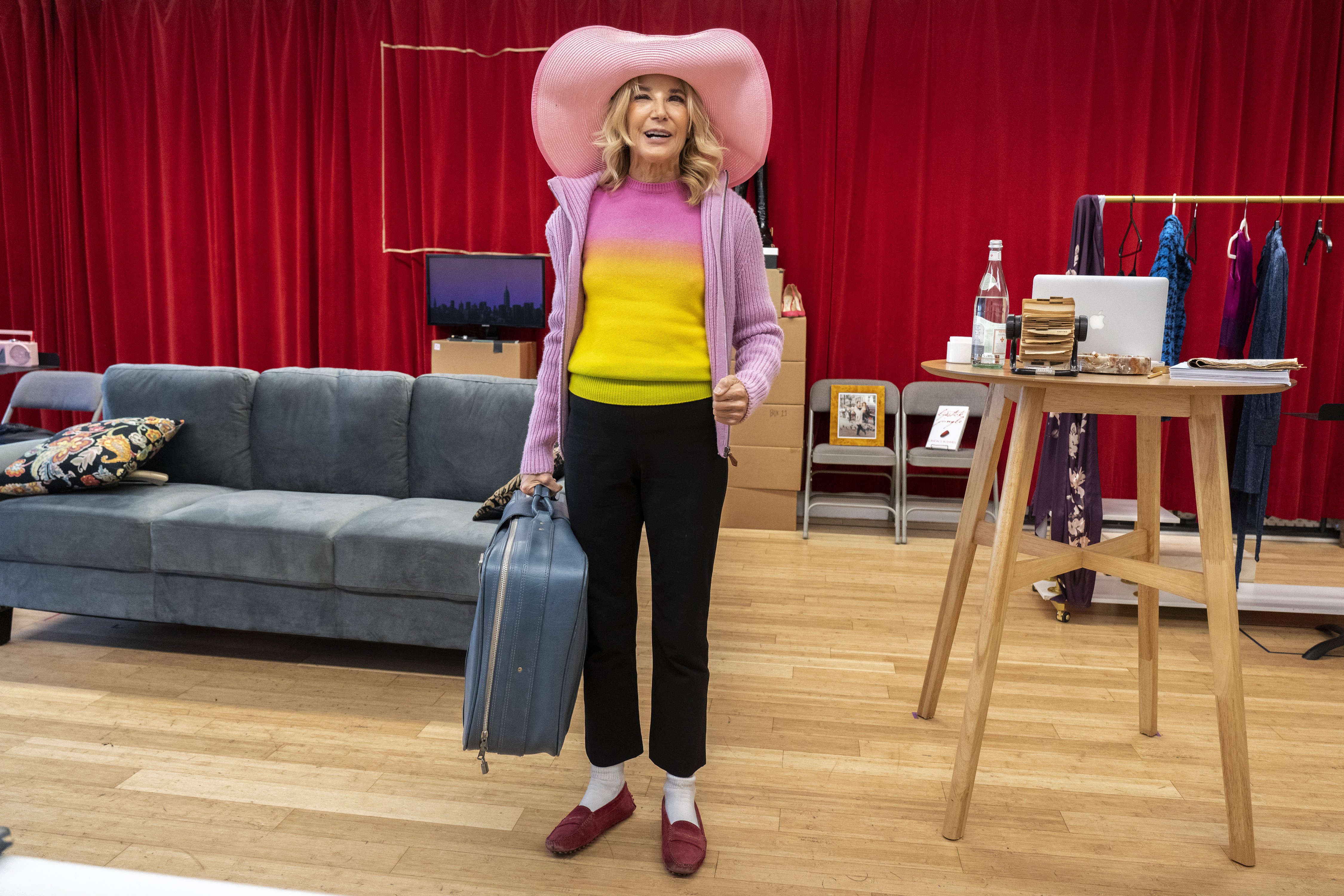 Candace Bushnell dons a big hat and luggage during a rehearsal of her one-woman show, “Is There Still Sex in the City?,” in New York. (The New York Times/Sara Krulwich)
VISION IN BLAHNIKS

Bushnell arrived at the Carlyle, a few blocks from her Upper East Side apartment, in a sensible gray sweater dress and a fresh pair of absolutely senseless shoes — red satin Manolo Blahniks with diamante buckles — that she walked in with impossible ease. (A line I'd heard during the rehearsal for the show earlier that day: "Do I have a shoe obsession like Carrie Bradshaw? No. Carrie Bradshaw has a shoe obsession because of me.") In person, she has the wide-set eyes and porcelain poise of a Meissen figurine and conversation as polished as the Carlyle's silverware.

As a child in Glastonbury, Conn., Bushnell acted sporadically, although she spent most of her free time scribbling short stories and riding her horses. When she moved to New York at 19 — "wild and full of philosophies," she said — she flirted with acting (that's her frisky verb), studying at HB Studio.

"I didn't think I was really very good at it, which I probably shouldn't say," she said.

Besides, she never loved it the way that she loved writing. "I really felt like, I've got to be a writer, or I'm going to die," she said. So she wrote, signing away the theatrical rights to each new book. But a few years ago, when apportioning the rights to "Is There Still Sex in the City?," she decided to hold onto the theatrical rights for herself.

She wasn't sure what to do with them. But then she met a talent manager, Marc Johnston, at the Carlyle, which Bushnell seems to treat as a bonus living room. He had helped to create a touring show for his client, composer and accidental reality TV star David Foster. He thought that he could do the same for her.

So again she wrote, this time in monologue form, repurposing stories from her books, her life, her lecture tours. That first draft ran about 200 pages. To shape up the script, Johnston and his fellow producer, Robyn Goodman, introduced Bushnell to director and choreographer Lorin Latarro.

In June, the show had a tryout at Bucks County Playhouse in New Hope, Pa. Set in a near replica of Bushnell's apartment, which includes her actual sofa, her actual carpet and her actual poodles, it unfurls as a chatty girls night.

And although Bushnell is a practiced host, those first performances were unnerving. "It was like, oh, God, this is really acting," Bushnell said. Gradually the script shortened, and Bushnell relaxed and improved.

"She's really miraculous," Goodman said. "She was determined to understand acting and she's done it."

Understanding meant hiring an acting coach and a voice coach, and committing to Pilates three times a week to build up her core strength for the show. Which is to say that Bushnell takes the work of rehearsal and performance seriously — hence the afternoon Earl Grey — comparing it to the dressage drills she practiced as a girl, repeating the same small moves until she gets them right.

I joked that this made her seem not entirely like a Carrie. "I don't even know what a Carrie is," she said.

HBO is busy reviving Carrie with a new series, "And Just Like That ... ," which follows most of the original "Sex and the City" characters into their 50s, but Bushnell is not involved. In several places, her stage show emphasizes differences between Bushnell and Carrie, but those differences pertain to matters of men and fashion, not ideology or temperament. Carrie is flighty; Bushnell has her feet, if not her heels, firmly on the ground. While Carrie's story ultimately became a romance, Bushnell maintains extreme ambivalence about romantic relationships. 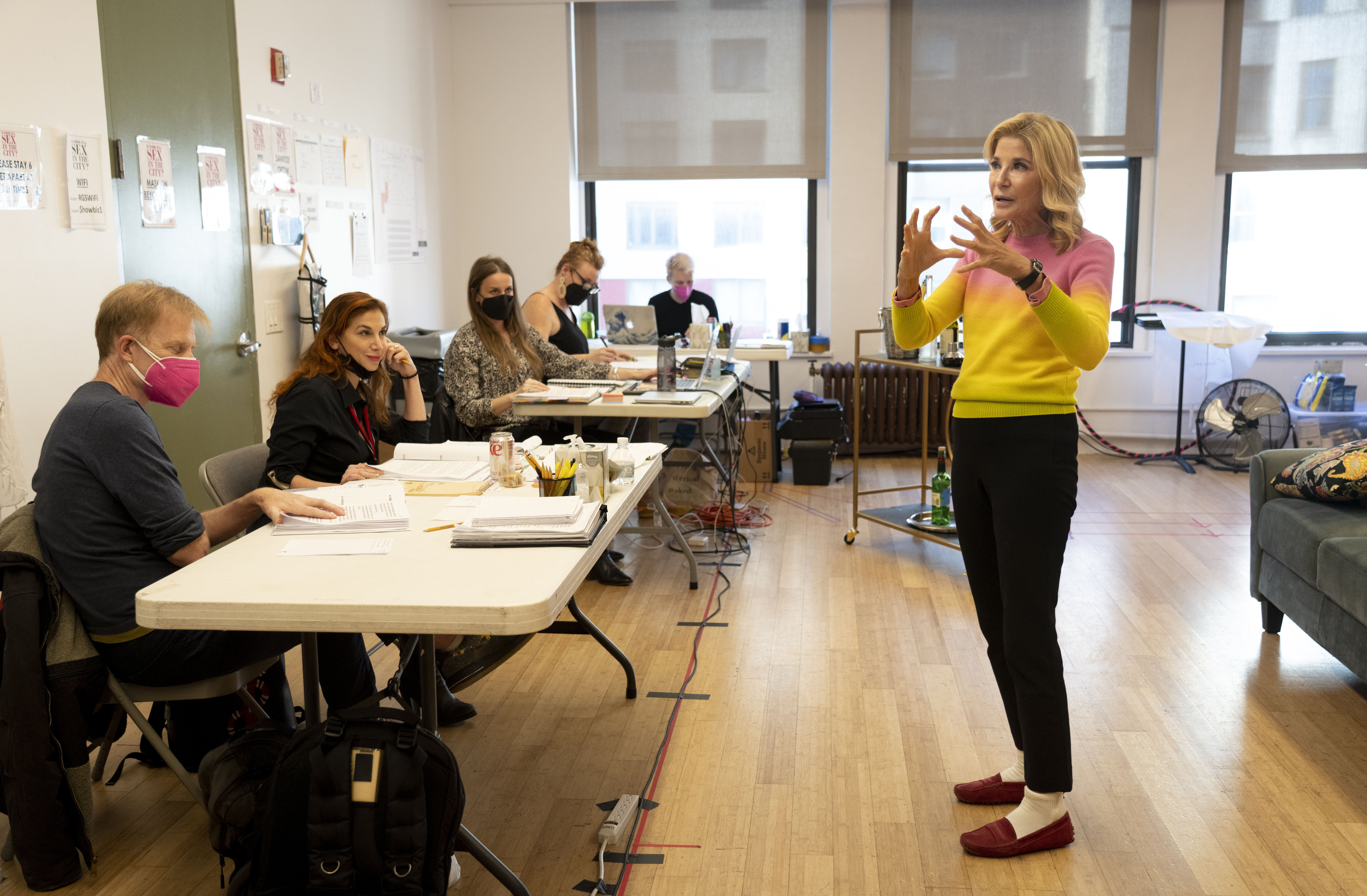 Candace Bushnell speaks during a rehearsal of her one-woman show, “Is There Still Sex in the City?” (The New York Times/Sara Krulwich)
A STAUNCH FEMINIST

Her feminism, which lurks at the margins of her books, emerges cogently and unashamedly in conversation. She speaks convincingly about the deforming effects of patriarchal power and the need for, as she put it, an equality of "mind, body and earning potential" — a nice surprise from a woman once known for table dancing at Da Silvano.

A Page Six darling, Bushnell has rarely received much credit for her politics, her obvious intelligence, her psychological acuity. (Let's just say that when I read her most recent book, I found a few pages that described my foundered marriage so entirely that I had to text them to a half-dozen friends and then lie down for a while.) And this is just ever so slightly on purpose.

She recalled that as a child, angry about the inequities of gender, her father sat her down and told her that while she had ideas that people would need to hear, no one would listen if she yelled them. "So I learned very early on to coat everything in a candy-colored, sugarcoated message. Because that's how you move society," she said.

Latarro, during a pre-rehearsal chat, agreed. "She writes feminism in a way that makes it palatable for a lot of women who have internalized misogyny and a lot of men who think everybody looks great in their sexy dresses."

The stage show, rich in quip and pop song snippet, is candy-colored, too — a chocolate martini with a sugared rim. Bushnell is recognizably herself, at least in the hour of rehearsal I saw, but buffed and glossed: a person repurposed as a fun and fabulous character. I asked her why she hadn't attempted something sharper, more bitter. Earlier drafts had darker elements, she said. But those were cut.

"The message that I'm delivering is probably risky enough as it is. I sit there and say, 'I'm not married, I don't have kids. And I'm grateful.'"

Not that she wants to bother her audience with too many messages, which is probably why the producers have created a post-show nightspot, the Candi Bar, in the basement of the Daryl Roth.

"Cosmos all night!" Johnston had said in an interview.

Bushnell, as she drank her tea, put it more practically. "People just want to feel good," she said. "And I want to give them a good time."