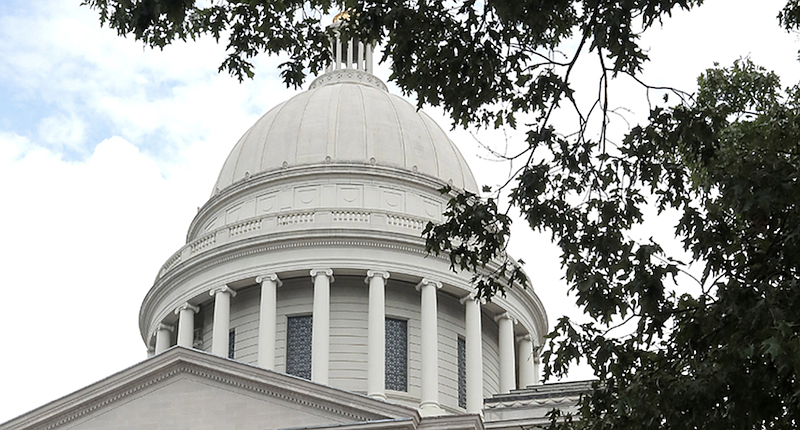 A draft bill that would cut the state’s top individual and corporate income tax rates and consolidate low-income and middle-income tax tables is being circulated among state lawmakers to gain their support.

Rep. Joe Jett, R-Success, and Sen. Jonathan Dismang, R-Searcy, said they are aiming to get a majority of members of the state House of Representatives and state Senate to sign up as co-sponsors of the proposal to enable Gov. Asa Hutchinson to call a special legislative session to consider the measure.

The proposal also would create a nonrefundable low-income tax credit, make adjustments to smooth the tax cliff between tax tables, index the standard deduction to the consumer price index, create triggers for some individual and corporate income tax rate cuts, and rename the state’s long-term reserve fund as the catastrophic reserve fund.

The draft bill reflects an agreement between Hutchinson and Republican legislative leaders.

“The tax cut bill is an agreed upon plan to lower our tax rates and simplify our tax filing,” Hutchinson said Friday in a written statement.

“The plan meets my goal of lowering our individual income tax rate down to 5.3% over time and providing balanced tax relief for all Arkansans,” he said. “I will not formally call a special session of the General Assembly until the bill is agreed to by a majority of legislators.” During Friday’s Legislative Council meeting, Rep. Lane Jean, R-Magnolia, referred to the possibility of the Republican-dominated Legislature meeting in a special session in the week that starts Dec. 5.

Hutchinson spokeswoman Shealyn Sowers said Friday that “no date has been set.” Jett said he rounded up 38 signatures from Republicans in the House to co-sponsor the draft bill in a short period of time Friday, and he wouldn’t be surprised to sign up 70 total by Tuesday afternoon.

The House consists of 78 Republicans and 22 Democrats. Jett said Friday that he plans to present the proposal to House Democrats soon.

Dismang said Friday that he will reach out to senators to sign up as co-sponsors soon.

“I really feel we’ll have broad support among the members,” said Dismang, a co-chairman of the Joint Budget Committee who serves on the Senate Revenue and Taxation Committee. The Senate consists of 26 Republicans, seven Democrats and an independent. There is one vacancy because of the resignation of Sen. Lance Eads, R-Springdale.

Asked whether the governor has agreed to put anti-abortion legislation promoted by Sen. Jason Rapert, R-Conway, on the call for the special session, Hutchinson said in a written statement, “Arkansas has already passed a very strict abortion bill that is making its way through the court system. It is a direct challenge to Roe v. Wade.

“I do not see a need to place a bill on the Special Session agenda that is weaker than the bill we have already passed,” he said.

“In terms of the other issues for a potential special session, we will report that down the road,” Hutchinson said. “Most of the issues are technical fixes, but I will outline that when I issue the proclamation for a special session. The session depends upon getting support for the tax cut plan.” On Oct. 19, Hutchinson said he decided against calling the special session to start Oct. 25, saying “we need more time” to finalize the details with legislative leaders and make sure that the package has sufficient support among lawmakers.

At that time, he said, “there is some other issues that have been brought up and it gives more time to analyze that, and hopefully we’ll have some [U.S.] Supreme Court guidance in the coming weeks that might shed some light on other items that members have mentioned might want to be discussed during that special session.” Hutchinson was referring to abortion-related lawsuits and to legislation patterned after the nation’s most restrictive abortion law, enacted in Texas.

The Texas law prohibits abortions once medical professionals can detect cardiac activity, usually around six weeks and leaves enforcement up to private citizens through civil lawsuits instead of criminal prosecutors, according to The Associated Press.

To consider bills not on the governor’s call for a special session, two-thirds of the 100-member state House of Representatives and 35-member Senate must vote to allow those bills to be introduced.

Rapert said he is scheduled to meet with Hutchinson on Tuesday.

He said he wants the special session to consider legislation that would take his Senate Bill 6 that was passed into law as Act 309 of 2021 and add a civil cause of action to the measure. He said the U.S. Supreme Court might issue a ruling on the Texas abortion law Monday.

He said he also wants the special session to consider a bill that would create a $3,000 income tax credit for full-time law enforcement officers that he estimated would reduce state tax revenue by about $25 million to $28 million a year.

In March, Hutchinson signed Senate Bill 6, enacting a near-total ban on abortions in Arkansas. The legislation signed by the governor allows the procedure in instances when the life of the mother is in danger and doesn’t have exceptions for rape or incest. Rapert has described the bill as a “trigger” aimed at forcing the U.S. Supreme Court to reconsider its decades-old precedent upholding the right to abortions under the Roe v. Wade decision.

In July, Act 309 of 2021 was blocked by U.S. District Judge Kristine G. Baker as she granted a preliminary injunction while she hears a challenge to its constitutionality.

According to a summary of the draft bill provided by Jett, the proposal would reduce the three regular tax tables to two by combining the lower- and middle-income tax tables, effective Jan. 1.

The new table would apply to taxpayers with net taxable income up to $84,500.

The high income tax table would apply to those with net taxable income above $84,500.

The draft bill includes provisions to smooth the tax cliff for those taxpayers whose incomes are barely above the tax threshold that bumps them into the high income tax table for taxpayers with net taxable income above $84,500. The cliff refers to the impact a relatively small rise in income has on the accompanying increase in taxes.

The top corporate rate would drop to 5.5% on Jan. 1, 2024, and then to 5.3% on Jan. 1, 2025, under the draft bill, but, as with the individual rate cuts for those dates, only if no funds are transferred in the prior year from the catastrophic reserve fund.

The draft bill also would grant Arkansans whose taxable incomes are at or below $23,600 and who timely file tax returns a $60 nonrefundable income tax credit. The $60 credit would phase out in $5 increments for every additional $100 in taxable income over the $23,600 threshold until the credit would be exhausted at $24,700.

The income tax thresholds that determine the amount of the credit would be indexed to inflation under this proposal.

The proposal includes some fiscal measures aimed at ensuring the renamed catastrophic reserve fund stays at 20% of net general revenue disbursed, according to a summary of the draft bill. The long-term reserve fund balance now is about $1.2 billion.

A month ago, Hutchinson and some lawmakers said they believe that Arkansas can afford to cut individual income taxes by more than $300 million over the next two years without negatively affecting critical state services in light of new revenue projections.

Some said that would go too far. Others said it wasn’t enough.

Senate Democratic leader Keith Ingram of West Memphis said last month that he doesn’t want to lull the public into believing that the state has excess state general revenue without “real needs” to fill, such as reducing the waiting list for people with developmental disabilities to get care and expanding access to pre-kindergarten programs.

A month ago, the finance department increased its projection for net general revenue by $246.2 million, to $6.1 billion, in the current fiscal year, projecting a year-end surplus of $263.2 million above the fully funded Revenue Stabilization Act, finance department Secretary Larry Walther said in a letter to lawmakers. The Revenue Stabilization Act prioritizes the distribution of general revenue to state-supported programs.

Earlier this year, the General Assembly and Hutchinson enacted a general revenue budget for fiscal 2022 totaling $5.8 billion, including a $17.1 million allocation to a restricted reserve fund.

The finance department a month ago also increased its projection for fiscal 2023 net general revenue by $298.5 million, to $6.4 billion.