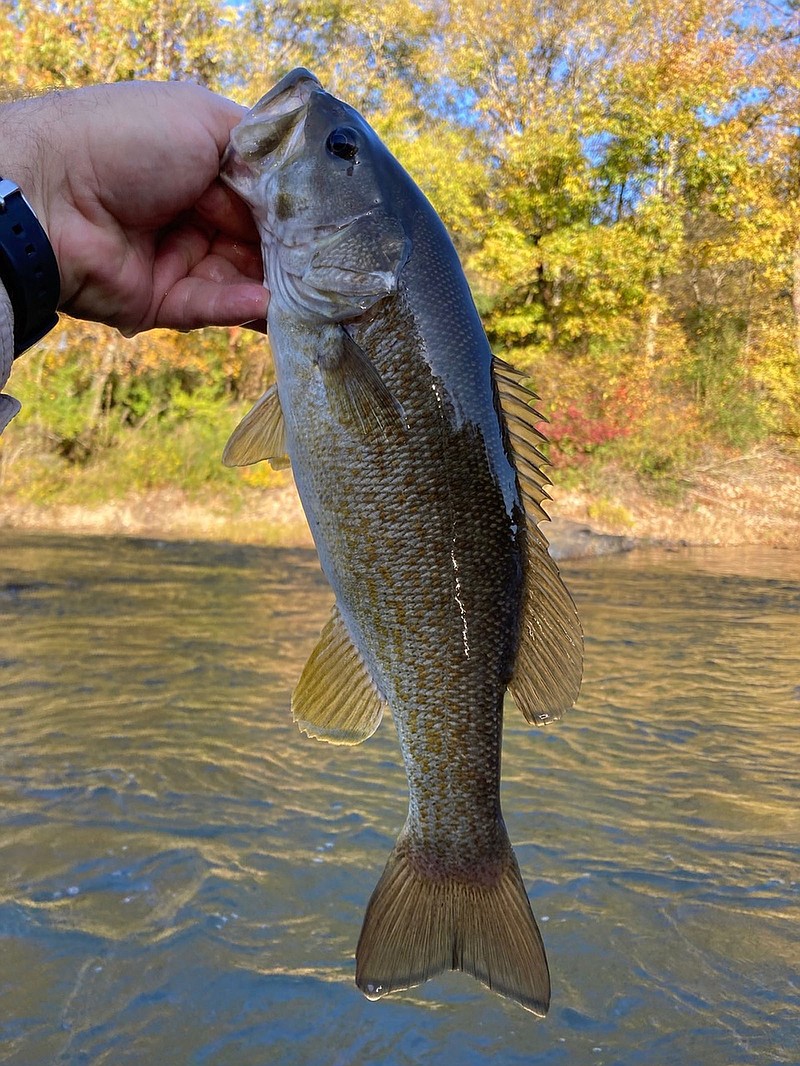 GLENWOOD -- I did not want to go fishing on Veterans Day, but Rusty Pruitt badgered me until I acquiesced.

I'm glad I did. The fishing was OK. We got enough bites to keep us engaged, and we caught enough big ones to make it interesting.

[Video not showing up above? Click here to watch » nwaonline.com/1121fishing/]

The fishing was merely an excuse to spend an exceptional autumn day on an Arkansas stream. An approaching cold front that would make temperatures plummet by Saturday was cool but not cold. The trees along the bank were resplendent in their autumn colors, but the trees on the hillsides were still green.

A steady tailwind was a welcome departure from the headwind that usually defines our float fishing trips. Instead of struggling to keep our canoe on a steady course, we struggled to keep from going too fast and blowing past the best fishing holes.

With leaves fluttering like confetti in the wind, the air smelled sweet and felt sharp, but not edgy. It was simply the kind of day that's impossible to be anything but happy.

Our initial intention was to fish a stream in Northwest Arkansas, but neither of us was enthused. Days are short, which means fishing time is short, even if you leave before dawn. We didn't want to leave that early, so we briefly contemplated floating the Saline River. Saline River Outfitters was closed, so floating the Saline would require inconveniencing a friend who lives near the river and owns paddlecraft. We didn't want to do that, either.

The Caddo River was a suitable compromise. It wasn't too far to drive, and the fishing was bound to be good.

The same cannot be said of the Fouche LaFave River near Y City where Pruitt and I fished on Halloween. I have wanted to fish that creek for 25 years, and I make a mental note to do so every time I cross it while traveling US-71. On Halloween, I talked Pruitt into making that trip. Without going into details, suffice it to say I got it out of my system, and I probably won't go there again.

Leaving Hot Springs, we called Lucky's Canoe Rental. It's off season on the Caddo and Lucky is knee deep in other projects, but he was happy to put us on the river.

Anglers have a certain mien when they're just happy to be someplace. They're not anxious. They take their time stowing and organizing their gear. They deliberate carefully over why fly or lure to tie on first. They savor every moment. That's how it was with Pruitt and me as we prepared to launch our canoe.

With golden leaves swirling under a deep blue sky mottled by puffy white clouds, the river roared over a fresh charge of water from the previous night's rain. The water was slightly stained, which suggested that bass would be comfortable hunting in the open instead of hunkering under rocks the way they do in clear water under clear skies.

On the other hand, Pruitt noted with a small amount of consternation that all of the cows we saw during the trip were lying down. Pruitt insists that prostrate cows mean fish won't bite, despite two decades of evidence to the contrary. I intended to disprove his theory -- again -- with a Zoom Mini Lizard in cotton candy pumpkin color. Pruitt tied one to his spinning rig, as well, and he tied a yellow popping bug to his fly rig.

Bass ignored the lizards, but Pruitt caught a succession of longear sunfish and green sunfish with the popping bug. He ignored me when I asked if cattle disposition applies only to bass and trout.

I quickly grew impatient with the inert lizard. I noticed bass crashing baitfish on the bank a couple of times, so I switched to a topwater lure called Whopper Plopper. Results were immediate. Smallmouth bass hit the garish sputtering lure in open water, but only when retrieved downstream. All of the fish were small, but a small fish is better than no fish. With these meager clues I could figure out how to catch bigger fish.

Instead, I went back to catching no fish, and I wondered if we hadn't caught the tail of a brief feeding window. Under a bright three-quarter moon, fish might be feeding at night. We went through pool after pool with no action and eventually settled into casual conversation. If we'd caught all we could, that was fine. The day was too nice for worrying.

Even on the nicest days, things happen to stoke one's ire. It happened to me when we passed through a screen of bushes hanging over a narrow run. I stowed my rods in the stern, but I didn't get them low enough. The Whopper Plopper snagged a limb and broke off. We beached the boat at the bottom of the run, and I waded upstream to search for the lure in the branches, but it was gone.

That was my only topwater lure, so I went back to the lizard. We reached our favorite pool at the bottom of a tricky S-turn rapid and beached the canoe. I cast into a seam, and my line immediately sliced downstream. I set the hook and initiated a fierce battle with a 15-inch smallmouth bass. Pruitt caught an identical fish on the other side of the pool, followed by two more that were slightly smaller.

Like flipping a switch, the fish stopped biting. That was a good thing because the sun was getting low, and we didn't want to be on the river in darkness. That happens to us with increasing frequency. It's one thing when it happens in the heat of summer. It's another when it happens in the deep freeze that descends on the world after sunset in November.

All the while, we marveled at all of the new homes that had sprung up in a short time on the riverbank. Most are very expensive.

"I wish I could have afforded to buy some of this land back in the 90s and early 2000s, when it was all for sale and cheap," I said.

Pruitt agreed, as did Lucky when he met us at the takeout to ferry our canoe back up to his camp.

"We could all three of us retire," Lucky said. "Instead, I'll have to work until the day I die."

All of that new construction has certainly changed the river's character, but the fishing is still great.

May it ever be.