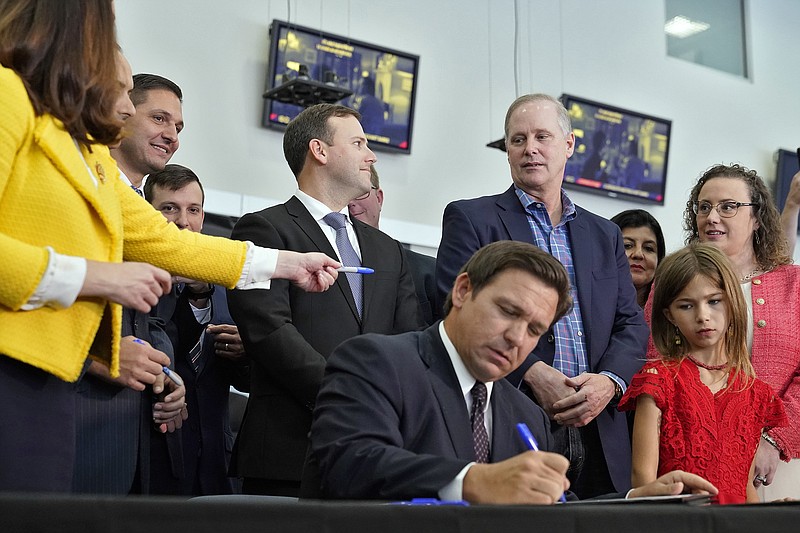 Florida Gov. Ron DeSantis, seated, signs a bill in front of supporters and members of the media during a news conference Thursday, Nov. 18, 2021, in Brandon, Fla. DeSantis signed the bill that protects employees and their families from coronavirus vaccine and mask mandates. (AP Photo/Chris O'Meara)

They contend that people who have recovered from the virus have enough immunity and antibodies to not need covid-19 vaccines, and the concept has been invoked by Republicans as a sort of stand-in for vaccinations.

Florida wrote natural immunity into state law this week as GOP lawmakers elsewhere are pushing similar measures to sidestep vaccination mandates. Lawsuits over the mandates have also begun leaning on the idea. Conservative federal lawmakers have implored regulators to consider it when formulating mandates.

Scientists acknowledge that people previously infected with covid-19 have some level of immunity but that vaccines offer a more consistent level of protection. Natural immunity is also far from a one-size-fits-all scenario, making it complicated to enact sweeping exemptions to vaccinations.

That's because how much immunity covid-19 survivors have depends on how long ago they were infected, how sick they were, and if the virus variant they had is different from mutants circulating now.

For example, a person who had a minor case one year ago is much different than a person who had a severe case over the summer when the delta variant was raging through the country. It's also difficult to reliably test whether someone is protected from future infections.

The Centers for Disease Control and Prevention reported in August that covid-19 survivors who ignored advice to get vaccinated were more than twice as likely to get infected again. A more recent study from the CDC, looking at data from nearly 190 hospitals in nine states, determined that unvaccinated people who had been infected months earlier were five times more likely to get covid-19 than fully vaccinated people who didn't have a previous infection.

"Infection with this virus, if you survive, you do have some level of protection against getting infected in the future and particularly against getting serious infection in the future," said Dr. David Dowdy of Johns Hopkins Bloomberg School of Public Health. "It's important to note, though, that even those who have been infected in the past get additional protection from being vaccinated."

Studies also show that covid-19 survivors who get vaccinated develop extra-strong protection, what's called "hybrid immunity." When a previously infected person gets a coronavirus vaccination, the shot acts like a booster and revs virus-fighting antibodies to high levels. The combination also strengthens another defensive layer of the immune system, helping create new antibodies that are more likely to withstand future variants.

The immunity debate comes as the country is experiencing another surge in infections and hospitalizations and 60 million people remain unvaccinated in a pandemic that has killed more than 770,000 Americans. Biden is hoping more people will get vaccinated because of workplace mandates set to take effect early next year but which face many challenges in the courts.

And many Republicans eager to buck Biden have embraced the argument that immunity from earlier infections should be enough to earn an exemption from the mandates.

"We recognize, unlike what you see going on with the federal proposed mandates and other states, we're actually doing a science-based approach. For example, we recognize people that have natural immunity," Florida Gov. Ron DeSantis, a Republican who has been a chief critic of virus rules, said at a signing ceremony for sweeping legislation to hobble vaccination mandates last week.

The new Florida law forces private businesses to let workers opt out of covid-19 mandates if they can prove immunity through a previous infection, as well as exemptions based on medical reasons, religious beliefs, regular testing or an agreement to wear protective gear. The state health department, which is led by Surgeon General Dr. Joseph Ladapo, who opposes mandates and has drawn national attention over a refusal to wear a mask during a meeting, will have authority to define exemption standards.

The Republican-led New Hampshire Legislature plans to take up a similar measure when it meets in January.

Lawmakers in Idaho and Wyoming, both statehouses under GOP control, recently debated similar measures but did not pass them. In Utah, a newly signed law creating exemptions from Biden's vaccination mandates for private employers allows people to duck the requirement if they have already had covid.

The debate is not unique to the United States. Russia has seen huge numbers of people seeking out antibody tests to prove they had an earlier infection and therefore don't need vaccinations.

Some politicians use the science behind natural immunity to advance narratives suggesting vaccines aren't the best way to end the pandemic.

"The shot is not by any means the only or proven way out of the pandemic. I'm not willing to give blind faith to the pharmaceutical narrative," said Idaho Republican Rep. Greg Ferch.

U.S. Sen. Roger Marshall, a Kansas Republican and physician, along with 14 other GOP doctors, dentists and pharmacists in Congress, sent a letter in late September to the Centers for Disease Control and Prevention, urging the agency, when setting vaccination policies, to consider natural immunity.

The White House has recently unveiled a host of vaccination mandates, sparking a flurry of lawsuits from GOP states, setting the stage for pitched legal battles. Among the rules are vaccination requirements for federal contractors, businesses with more than 100 employees and health care workers.

In separate lawsuits, others are challenging local vaccination rules using an immunity defense.

A 19-year-old student who refuses to be tested but claims he contracted and quickly recovered from covid-19 is suing the University of Nevada, Reno, the governor and others over the state's requirement that everyone, with few exceptions, show proof of vaccination in order to register for classes in the upcoming spring semester. The case alleges that "covid-19 vaccination mandates are an unconstitutional intrusion on normal immunity and bodily integrity."

Another case, filed by workers of Los Alamos National Laboratory, challenges their workplace vaccination mandate for civil-rights and constitutional violations, arguing the lab has refused requests for medical accommodations for those workers who have fully recovered from covid-19.

A similar lawsuit from Chicago firefighters and other city employees hit a bump last month when a judge said their case lacked scientific evidence to support the contention that the natural immunity for people who have had the virus is superior to the protection from the vaccine.

Information for this article was contributed by Lauran Neergaard of The Association Press. 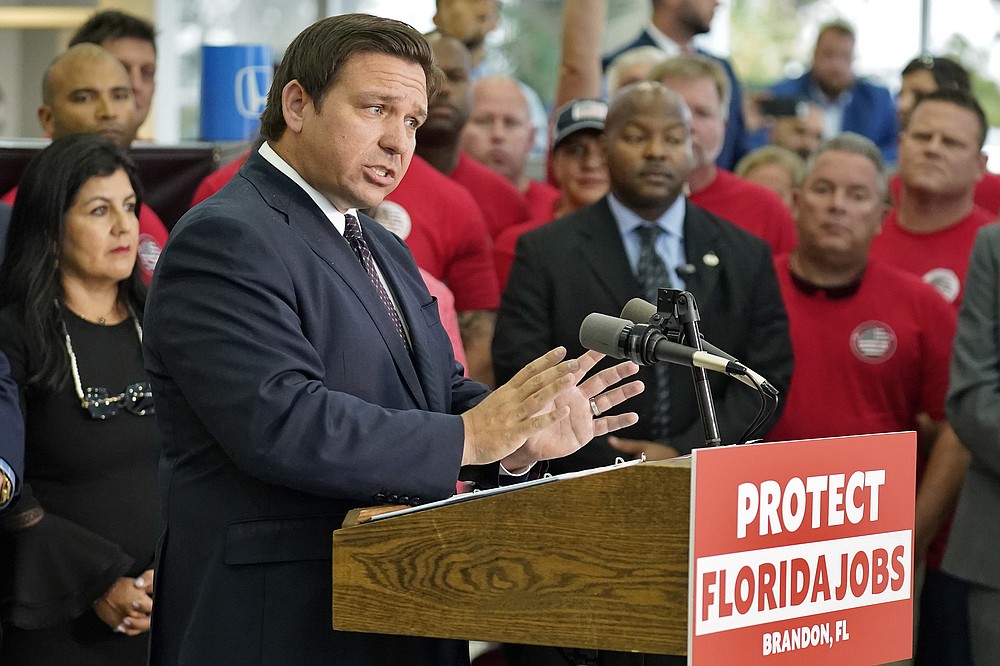 Florida Gov. Ron DeSantis speaks to supporters and members of the media before a bill signing Thursday, Nov. 18, 2021, in Brandon, Fla. DeSantis signed a bill that protects employees and their families from coronavirus vaccine and mask mandates. (AP Photo/Chris O&#x27;Meara)