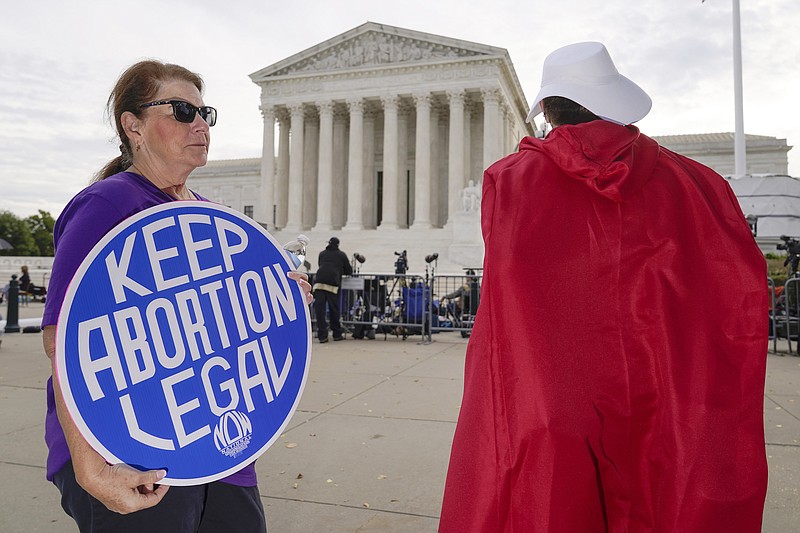 FILE - The Supreme Court is seen on the first day of the new term as activists demonstrate on the plaza, in Washington, Monday, Oct. 4, 2021. Arguments are planned for December challenging Roe v. Wade and Planned Parenthood v. Casey, the Supreme Court's major decisions over the last half-century that guarantee a woman's right to an abortion nationwide. (AP Photo/J. Scott Applewhite, File)

More Texans are seeking abortions in out-of-state facilities -- including in Arkansas -- after their state's passage this year of a controversial law, which has had a "chilling effect" on abortion services here and around the U.S, according to providers.

The Texas bill, enacted in May, bans abortions at about six weeks from the mother's last menstrual period, but its unique feature is the enforcement mechanism -- a civil cause of action, allowing private citizens to enforce the law through lawsuits rather than relying on government enforcement.

Some lawmakers in Arkansas hope to enact similar legislation as early as next month, but much rides on the U.S. Supreme Court, which many legal experts expect will give its take on the Texas law today.

If a Texas-modeled bill takes effect in Arkansas, the vast majority of Arkansans will lose access to abortion care in their home state, according to Planned Parenthood and Republicans state lawmakers.

"This is the most challenging time I've been in for patients' access to health care – for financial reasons, for social reasons, for medical reasons. The system is difficult to navigate," said Dr. Janet Cathey, a physician at Planned Parenthood's Arkansas health centers. "I want to reassure our patients. We're here. We are here to help them navigate a complicated system."

Many in- and out-of-state residents have called Arkansas clinics to ask if abortion is still legal in Arkansas, said Emily Wales, CEO of Planned Parenthood Great Plains, which covers Arkansas, Kansas, Missouri and Oklahoma. It is, up to 20 weeks into a pregnancy.

Sen. Jason Rapert, R-Conway, said his goal is to end abortion in Arkansas. In 2013, Rapert designed legislation that became the strictest abortion law in the country at the time, banning abortion after a fetal heartbeat is detected.

That bill was struck down by the courts, but Rapert is now planning to follow the Texas abortion law.

"We already have a bill drafted," Rapert said Friday evening before alluding to potential Supreme Court action today. "We don't know if the latest hearing on Texas civil cause of action that is being heard there will be part of that announcement. Monday will be a big day, one way or another."

Rapert said he and other lawmakers are planning to add this "civil cause of action" feature to Act 309 of 2021, which calls for a total abolishment of abortion except to save the life of the mother. The law has been put on hold by a federal judge.

The General Assembly is expected to be called into session by Gov. Asa Hutchinson in December, primarily to consider income-tax cuts, but Rapert and others hope to also introduce abortion restrictions modeled after those in Texas.

Hutchinson, a Republican, has been hesitant to commit to a date for the session or allowing legislation related to abortion.

However, the Legislature, with a two-thirds vote in both chambers, can allow bills to be introduced that aren't included on the governor's call.

"Arkansas has already passed a very strict abortion bill that is making its way through the court system," Hutchinson said in a statement through a spokeswoman on Friday. "It is a direct challenge to Roe v. Wade. I do not see a need to place a bill on the Special Session agenda that is weaker than the bill we have already passed."

Rapert said he plans to meet with the governor to discuss the abortion legislation Tuesday.

In Texas, approximately 80% of patients are now unable to access abortion care close to home because of the six-week ban, according to Planned Parenthood.

Despite this, the vast majority -- more than 90% -- of patients at Arkansas Planned Parenthood clinics are still Arkansans, according to the nonprofit health care provider.

Providers said that the doors are open at the Planned Parenthood clinic in Little Rock, which offers medical abortions up to 10 weeks, as well as Little Rock Family Planning Services -- the only clinic that legally offers surgical abortions up to 21 weeks from the last menstrual period (19 weeks after conception), according to its website. The new Planned Parenthood clinic in Rogers does not currently offer abortions.

"While we believe it's critical to provide comprehensive care, including abortion services, it's only one part of what we do," Wales said via email. "Of the thousands of visits we provide each year, approximately 85% are for services other than abortion, including STI testing and treatment, contraception, gender-affirming care, and primary care."

Last Monday, Americans United for Life announced that Arkansas is the "most pro-life" state in America for the second year in a row.

"This is incredible news. Arkansans should be proud of their state legislators for enacting the best laws in the nation when it comes to protecting innocent human life. That's something to celebrate," according to a Thursday news release from the Family Council, a conservative education and research organization based in Little Rock.

In March, Arkansas Gov. Asa Hutchinson signed a bill into law that placed a near-total ban on abortion. A federal judge in July blocked that law, which was meant to challenge the U.S. Supreme Court's 1973 Roe v. Wade decision that legalized abortion nationwide

This and other recent Arkansas legislation is part of an escalating trend in states to ban abortion entirely or very early in pregnancy -- a mount of a "decades-long efforts to eliminate legal access to abortion state-by-state," according to the Guttmacher Institute, a pro-choice research firm.

The Arkansas abortion ban does not come as a surprise, according to the institute. In four years, then-President Donald Trump confirmed more than 200 federal judges--nearly three in 10 of all active federal judges in the United States and three of the nine justices on the U.S. Supreme Court.

As the courts have become more conservative, state legislatures have focused more attention on total and early abortion bans, with the hope that eventually the Supreme Court will allow such sweeping laws to take effect.

In addition to the Arkansas abortion ban, South Carolina enacted in February a ban on abortion at six weeks of pregnancy.

States have enacted at least 106 abortion restrictions in 2021, according to the Guttmacher Institute. This has been a year marked by unprecedented threats to U.S. abortion rights and access, Elizabeth Nash, the institute's interim associate director of state issues wrote in October.

Arkansas passed more than 10 anti-abortion laws earlier this year that included more than 20 new restrictions on abortions -- the most of any state, according to the Guttmacher Institute.

"As a result of the work done in the legislature since republicans have taken the majority... We were named the most pro-life state last year and again this, because we continue to take a strong stance. That's further reinforcement for that we go forward. The idea is to stop abortion, not just to make a list," Rapert said.

"I will tell you that anybody that fails to continues to take a stand for life in the State of Arkansas will find failure in the eyes of voters."

According to the 2021 Arkansas Poll, directed by the University of Arkansas, Fayetteville's Department of Political Science, of residents asked, "Do you favor laws that would make it more difficult/easier to get an abortion, or no change to existing laws?" 38% said more difficult, 18% said easier and 29% said no change.

"A near-total ban on abortion was blocked by a federal court this summer, but many of the new restrictions have taken effect, including hospital and ambulance transfer agreements for providers of abortion care, new ultrasound mandates, and reporting requirements," Wales said, highlighting some of the key restrictions from this past year.

One in five women have visited a Planned Parenthood clinic at least once, according to its data, with roughly 6,700 visits each year at its Arkansas locations.

"In recent weeks, extreme politicians in Arkansas and across the country have been grabbing headlines by pushing unconstitutional bounds on abortion access, which would restrict abortion to six weeks, before many patients know they're pregnant," Wales said last week. "These dangerous bans, if enacted, could result in patients having no choice but to carry these pregnancies to term against their will."

The Planned Parenthood Great Plains CEO said this would increase maternal mortality rates in the state, and the organization will fight this type of legislation.

The CDC also reports more than 60,000 new mothers annually experience serious or life-threatening complications. From 1993 to 2014, the serious-complication rate more than doubled.

When Rapert first started fighting for the "right to life," he said he was quoting statistics that showed 50 million fetal deaths, now it's over 62 million.

He said people do not need to choose abortion in Arkansas given the state's adoption and foster process.

As many as 5,200 children were in foster care before 2016, records show. The number of children in foster care in Arkansas went from 4,303 in July 2019 to 4,851 by the end of June this year, a 12.7% increase in two years, according to August reporting by the Arkansas Democrat-Gazette.

While it's unclear whether Arkansas lawmakers will consider a Texas-style abortion ban this year, the Supreme Court could provide more clarity today.

Arkansas is among 21 states with "trigger laws" that would ban abortion if the nation's high court overturned its landmark 1973 decision.

"It is far from a foregone conclusion that the Court will cast aside five decades of precedent to overturn Roe and allow states to ban abortion," Nash, of the Guttmacher Institute, wrote. "However, by even accepting the case, the Court has signaled that it is willing to revisit the legality of abortion. Furthermore, the Court's Sept. 1 decision to decline to block an unconstitutional six-week abortion ban in Texas (S.B. 8) from going into effect may be an indicator of its intent."