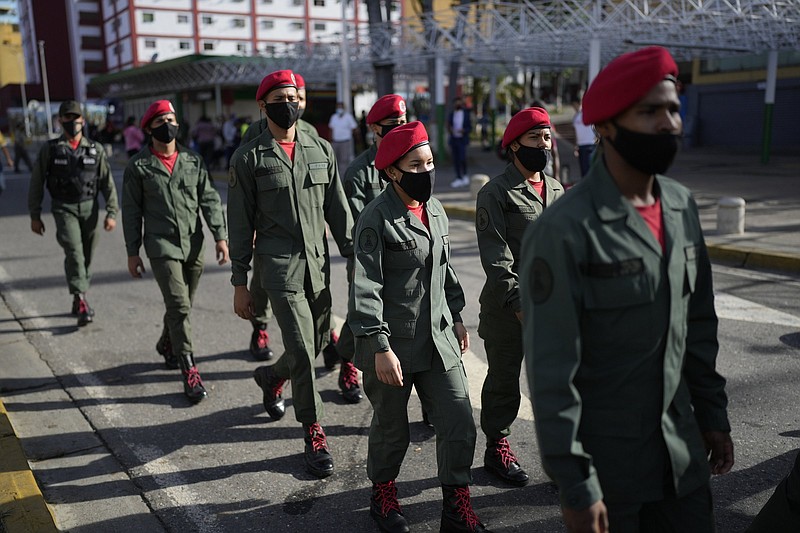 Soldiers arrive to vote during regional elections, at a polling station in the Fermin Toro school in Caracas, Venezuela, Sunday, Nov. 21, 2021. Venezuelans go to the polls to elect state governors and other local officials. (AP Photo/Ariana Cubillos)

CARACAS, Venezuela -- Venezuela's electoral system was being put to the test Sunday, with millions of people casting ballots for thousands of races -- the first in four years with major opposition participation after a series of boycotts over unfair conditions.

The contest was being observed by more than 130 international monitors, mostly from the European Union, satisfying a longstanding demand of the opponents of President Nicolas Maduro.

Main opposition parties agreed to participate after the government promised measures to build confidence during now-suspended negotiations between the ruling party and adversaries.

More than 21 million Venezuelans are eligible to vote in over 3,000 contests, including for 23 governors and 335 mayors positions. More than 70,000 candidates entered the races.

Maduro is not on the ballot. His term ends in 2025. But what is at stake is the legitimacy of the National Electoral Council, which has often been accused of setting conditions favorable to Maduro's allies.

In recent years, the council has disqualified parties and some of the most popular opposition candidates.

The international observers have been deployed across Venezuela to observe conditions such as fairness, media access, campaign activities and disqualification of candidates. They are expected to release a preliminary report early next week and an in-depth look next year.

It is the first time in 15 years that EU observers are in Venezuela. In previous elections, foreign observation was essentially carried out by multilateral and regional electoral organizations close to the Venezuelan executive.

Historically, voter turnout has been low for state and municipal elections, with abstention hovering around 70%.

Regardless of turnout, Sunday's elections could mark the emergence of new opposition leaders, consolidate alliances and draw the lines to be followed by Maduro's adversaries, who arrive at these elections decimated by internal fractures, often rooted in their frustration at not being able to knock from power the heirs of the late President Hugo Chavez.

"What we are going to see is a fight for second place because second place will symbolically mean which opposition [the government believes] should be stopped more, that will have a weight," said Felix Seijas, director of the statistical research firm Delphos. He added that the results will show who ultimately "is the second force" of the country, and which segment of the opposition represents it.

Maduro and First Lady Cilia Flores in televised messages after casting their ballots urged Venezuelans to go out to vote.

"I know that from the vote of the people, decisions will emerge that guide us, that point us to the direction, the destiny of the country," Maduro said.

The negotiations were suspended last month after the extradition to the U.S. of a key Maduro ally.