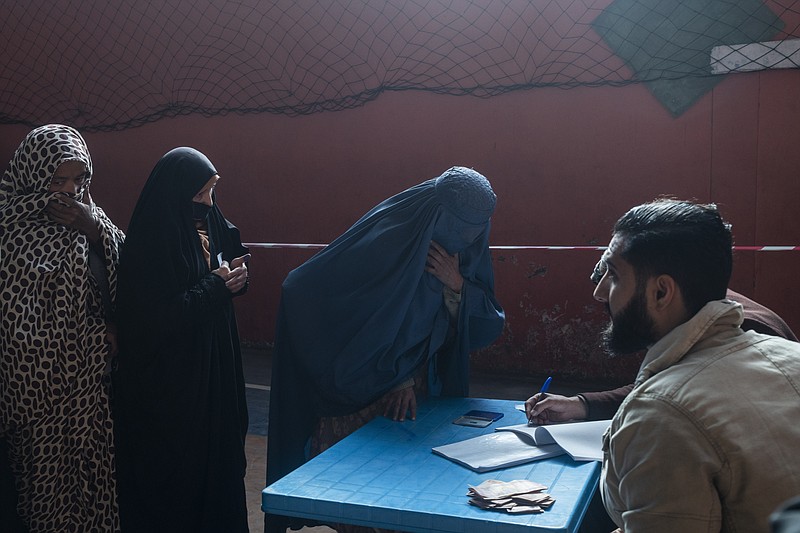 An Afghan woman resisters her name to receive cash at a money distribution center, organized by the World Food Program in Kabul, Afghanistan on Wednesday, Nov. 17, 2021. With the U.N. warning millions are in near-famine conditions, the WFP has dramatically ramped up direct aid to families. (AP Photo/Petros Giannakouris)

KABUL, Afghanistan -- Not long ago, Ferishta Salihi and her family had enough for a decent life. Her husband was working and earned a good salary. She could send several of her daughters to private schools.

But now, since her husband lost his job after the Taliban takeover of Afghanistan, she was lined up with hundreds of other Afghans, registering with the U.N.'s World Food Program to receive food and cash that her family desperately needs just for survival.

"We have lost everything. We've lost our minds," Salihi said after her registration was complete. With her was her eldest daughter, 17-year-old Fatima, whom she had to take out of school. She can't afford to pay the fees at a private school, and the Taliban so far are not allowing teenage girls to go to public schools.

"I don't want anything for myself, I just want my children to get an education," Salihi said.

In a matter of months as Afghanistan's economy craters, many stable, middle-class families have plummeted into desperation, uncertain how they will pay for their next meal. That is one reason the United Nations is raising alarm over a hunger crisis, with 22% of the population of 38 million already near famine and another 36% facing acute food insecurity -- mainly because people can't afford food.

The economy was already in trouble under the previous, U.S.-backed government, which often could not pay its employees. The situation was worsened by the coronavirus pandemic and by a punishing drought that drove up food prices. Already in 2020, nearly half of Afghanistan's population was living in poverty.

Then the world's halt to funding to after the Taliban's Aug. 15 seizure of power pulled the rug out from under the country's small middle class. International funding once paid for much of the government budget -- and without it, the Taliban have largely been unable to pay salaries or provide public services. The international community has not recognized Taliban rule, demanding the militants form a more-inclusive government and respect human rights.

Now families that have seen their once-stable livelihoods wrecked also find themselves with nothing and must scrape for ways to cover the costs of food, rent and medical expenses.

Salihi's husband once made around $264 a month working in the logistics department at the World Bank's office in Kabul. But after the Taliban took power, the World Bank halted its projects. The 39-year-old Salihi said her husband was told not to come to the office and he hasn't received his salary since.

Now she is the family's only source of income. One of her neighbors has a business selling nuts, so they give her bags of nuts to shell at home and she then sells the shells to people who use them to burn for fuel.

Her husband, she said, spends his day walking around the district looking for work. "All he can do is measure the streets with his steps," she said, using an expression for someone with nothing to do.

The U.S. and other international donors are funneling money to Afghanistan for humanitarian aid through U.N. agencies, which ensure the money doesn't go into the coffers of the Taliban government. The main focus has been on two tracks. The U.N. Development Program, World Health Organization and UNICEF are working to directly pay salaries to doctors and nurses around the country to keep the health sector from collapsing. The World Food Program, meanwhile, is providing direct cash aid and food to families, trying to keep them above water.

It's not just the poorest of the poor, usually based in rural areas, who need help. "There's a new urban class of people who up until the summer would have been drawing a salary ... and now are facing hunger for the first time," said Shelley Thakral, the food program spokesperson for Afghanistan. 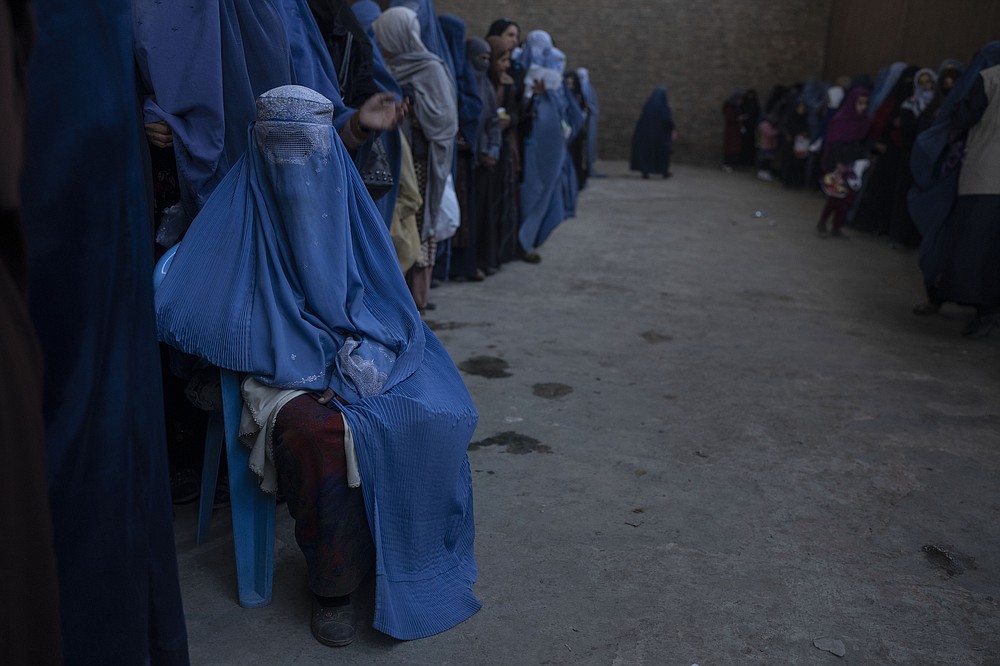 An Afghan woman sits on a chair as she waits with others to receive cash at a money distribution organized by the World Food Program in Kabul, Afghanistan, Saturday, Nov. 20, 2021. With the U.N. warning millions are in near-famine conditions, the WFP has dramatically ramped up direct aid to families. (AP Photo/Petros Giannakouris)