Limiting the three: Hogs shut down ‘Cats from deep 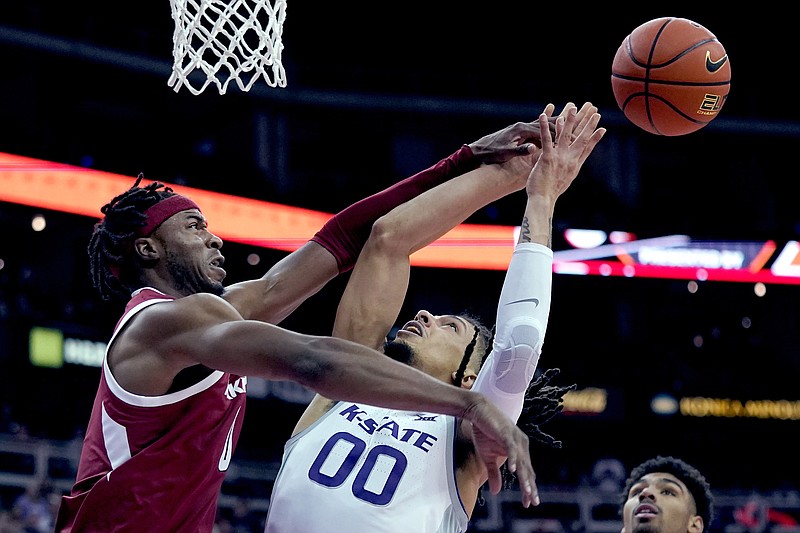 KANSAS CITY, Mo. -- The Arkansas Razorbacks came into Monday night's game against Kansas State ranked No. 341 nationally in three-point defense at 43.4% out of 350 teams.

But the University of Arkansas turned those numbers upside down in T-Mobile Center.

The No. 13 Razorbacks beat the Wildcats 72-64 in the nightcap of the Hall of Fame Classic's first round and held Kansas State to 3 of 22 on three-pointers.

Senior guard Chris Lykes scored 14 points off the bench for Arkansas and hit 10 of 10 free throws, including 8 of 8 in the final 1:47 to help the Razorbacks hold on for the victory.

"We feel like he's a guy that's really confident and wants the ball in his hands late in the game," Arkansas Coach Eric Musselman said. "Certainly those free throws that he made were crucial for us to continue to have enough of a cushion."

Lykes, a transfer from Miami, has hit 23 of 27 free throws this season.

"Coach trusts us to have the ball in those situations at the end, and in a fouling situation you've got to be able to knock down those free throws," Lykes said. "It's something we do every day. This is expected of me as a point guard."

Lykes kept the ball in his hands to make sure the Wildcats had to foul him.

"Obviously, he knew he was a great free-throw shooter, and his team knew as well," Kansas State guard Nijel Pack said. "We were even trying to get the ball out of his hands after we saw him make a few, but he just kept making sure that he was the one at the foul line, which was a pretty smart play by him.

"It really sucks. We were hoping and praying for a couple misses. But it's just a credit to him."

Arkansas first three opponents had hit 43 of 99 three-pointers, including 17 of 37 by Northern Iowa in the Razorbacks' 93-80 victory on Wednesday night.

"I made the comment we were one of the worst in the country and that would be addressed," Musselman said of the Razorbacks' struggles with perimter defense. "And it would be addressed immediately and they would not forget what we do."

"They did a great job obviously defending our three as well," Musselman said. "We've just got to regroup and try to get ready for Cincinnati."

Pack was 1 of 6 on three-pointers against Arkansas after being 7 of 11 in the Wildcats' first two games.

"It was just a bad night for us shooting from the 3-point line," Pack said. "It's going to happen. There's going to be games we struggle from the three-point line and we have to learn to adjust quicker."

"He definitely got the advantage over our bigs," Kansas State Coach Bruce Weber said.

Au'Diese Toney had 13 points and 9 rebounds for Arkansas, JD Notae had 11 points and 5 assists and Stanley Umude had 10 points.

Pack and Selton Miguel each scored 14 points for Kansas State (2-1).

After a turnover by Pack, Lykes hit two more free throws to make it 70-60 with 30.3 seconds left.

Lykes then closed it out with two more free throws.

Kansas State was 0 of 13 on three-pointers before Luke Kasubke finally ended the drought by hitting a shot from beyond the arc with 12:16 to play to cut Arkansas' lead to 51-36.

"We put an emphasis on guarding the three-pointers," Toney said. "We just took that and had to contest them. Coach said no threes at all, and we limited them to three."

The Razorbacks never trailed in jumping ahead 10-2 and led 42-24 at halftime.

"I thought that first half was about as good a 20 minutes as we've played since I've been here," said Musselman has a 49-19 record in his third season at Arkansas. "I thought we moved the ball really, really well."

Kansas State had a 29-28 rebounding edge, but Arkansas had 13 offensive rebounds including six by Toney and three by Vanover -- that helped the Razorbacks outscore the Wildcats 16-8 in second-chance points.

"They're a good rebounding team and we held serve on the glass," Musselman said. "We forced 15 turnovers.

"So a lot of positives tonight for sure. I mean, it's hard to beat a Big 12 team by eight points and to control the game from start to finish.

"It's hard to play with a big lead, and they did what we expected a team like K-State to do. They fought back and they scrapped.

"But I thought we did a good job from the 10-minute mark on down utilizing clock management to the point that even if we didn't score, it was going to be hard for them to overcome the lead we had."

"Credit to them," Weber said. "If you've watched their games, they've gotten behind to almost every team, even their exhibition games.

"But they came out and attacked us. They were in attack mode their pressure was really good.

"It disrupted us. I guess sometimes at halftime, you take a deep breath and figure it out."

Musselman said he was impressed by the toughness and team chemistry Cincinnati showed in beating Illinois by 20 points.

"Cincinnati came running down that hallway after they beat Illinois," Musselman said of the area leading to the team locker rooms. "They felt incredible about themselves and I told our team, 'We've got to feel good, too.'