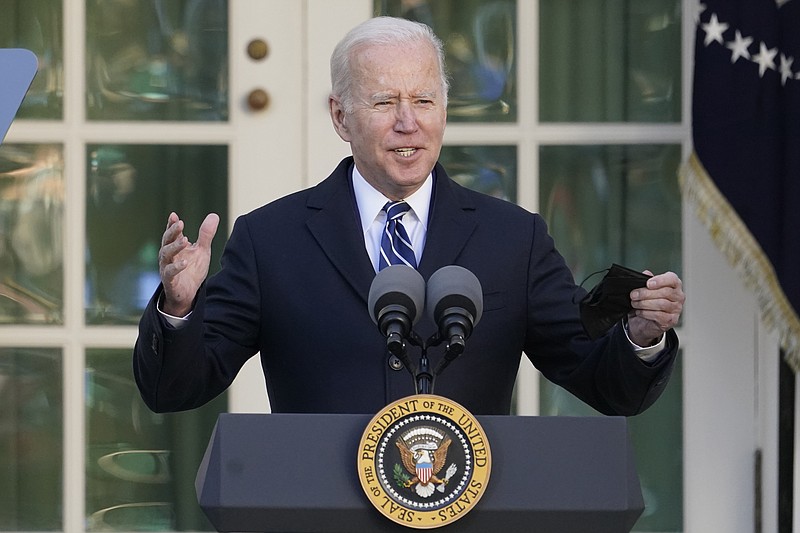 FILE - President Joe Biden speaks during a ceremony to pardon the national Thanksgiving turkey in the Rose Garden of the White House, in Washington, Nov. 19, 2021. More than 90% of federal workers have received at least one dose of a COVID-19 vaccine by Monday&#x2019;s deadline set by President Joe Biden. Biden announced in September that all federal workers were required to undergo vaccination, with no test-out option, unless they secured an approved medical or religious exemption. (AP Photo/Alex Brandon)

WASHINGTON -- More than 90% of federal workers received at least one dose of a covid-19 vaccine by Monday's deadline set by President Joe Biden.

Biden announced in September that more than 3.5 million federal workers were required to undergo vaccination, with no option to get tested regularly instead -- only an approved medical or religious exemption. A U.S. official said the vast majority of federal workers are fully vaccinated, and that a smaller number have pending or approved exceptions to the mandate.

[Video not showing up above? Click here to watch » arkansasonline.com/1123vaccine/]

In all, more than 95% of federal workers are in compliance with the policy, the official said, either by being vaccinated or having requested an exemption. Workers who are not in compliance are set to begin a "counseling" process that could ultimately result in their termination.

The official spoke on condition of anonymity to discuss the statistics before being authorized.

The deadline is a major test of Biden's push to compel Americans to get vaccinated, as his administration has emphasized that vaccination is the nation's surest way out of the pandemic. Beyond the federal worker rule, the administration is looking to compel large businesses to institute vaccinate-or-testing requirements that would cover more than 84 million workers, though plans for January enforcement are on hold pending litigation.

There was considerable concern over whether federal employees would follow the mandate, particularly in law enforcement and intelligence agencies where there was some vocal resistance, and among federal workers involved in the travel sector heading into the busy holiday travel season

The official said the Office of Management and Budget would release a breakdown of agency compliance rates Wednesday.

According to the official, nearly 25% of the Internal Revenue Service's employees started getting vaccinated after Biden's announcement, and 98% of its employees are now in compliance.

Just about two weeks ago, several intelligence agencies had at least 20% of their workforce unvaccinated, said U.S. Rep. Chris Stewart, a Utah Republican who is a member of the House Intelligence Committee. Federal Law Enforcement Officers Association President Larry Cosme said about the same time that there are about 31,000 members from 65 federal law enforcement agencies in the association and he estimated 60% of them had been vaccinated.

The White House is now aiming to use the federal mandate as a model for private businesses to implement their own mandates even before litigation of the Occupational Safety and Health Administration's rule is resolved.

Since Biden announced the first federal mandates this summer, the number of unvaccinated Americans 12 and older has dropped from about 100 million to under 60 million. Health officials emphasize that the overwhelming majority of instances of serious illness and death now occur among those who haven't gotten a shot.

The funding will go to the National Health Service Corps, the Nurse Corps and Substance Use Disorder Treatment and Recovery programs, all federal programs that offer scholarship and loan repayments for health care students and workers if they pledge to work in underserved and high-risk communities.

"Our nation must invest in a health care workforce that looks like America, and provide access to equitable health care for all Americans," Harris said.

The money, which includes funds from the American Rescue Plan and other sources, will support more than 22,700 providers, marking the largest number of providers enrolled in these programs in history, according to the White House. It comes in response to recommendations laid out this month by the White House's COVID-19 Health Equity Task Force, which issued a report outlining how the administration could address systemic inequality in the health care system.

The pandemic has highlighted and also exacerbated health care disparities for minority and underserved communities. According to an analysis by the Kaiser Family Foundation, minority Americans have seen higher numbers of cases and higher rates of death than their white counterparts.

It's just the latest investment from the $1.9 trillion American Rescue Plan passed in March. Earlier this month, the White House announced an additional $785 million in funding for federal programs aimed at improving diversity in the public health workforce and supporting people with disabilities.

She said the package would also make a historic investment in maternal health "to address the tragedy of black maternal mortality in America."

Black women in the U.S. are about three times as likely to die from a pregnancy-related cause than white, according to the Centers for Disease Control and Prevention.

A month ago, new coronavirus cases in the United States were ticking steadily downward and the worst of a miserable summer surge fueled by the delta variant appeared to be over. But as Americans travel this week to meet far-flung relatives for Thanksgiving dinner, new cases are rising once more, especially in the Upper Midwest and Northeast.

Federal medical teams have been dispatched to Minnesota to help at overwhelmed hospitals. Michigan is enduring its worst surge yet, with daily caseloads doubling since the start of November. Even New England, where vaccination rates are high, is struggling, with Vermont, Maine and New Hampshire trying to contain major outbreaks.

Nationally, case levels remain well below those of early September, when summer infections peaked, and are below those seen last Thanksgiving. But conditions are worsening rapidly, and this will not be the post-pandemic Thanksgiving that Americans had hoped for.

More than 90,000 cases are being reported each day, comparable to early August, and more than 30 states are seeing sustained upticks. In the hardest-hit places, hospitalizations are climbing.

"This thing is no longer just throwing curveballs at us -- it's throwing 210-mile-an-hour curveballs at us," said Michael Osterholm, a public health researcher at the University of Minnesota. He said the virus had repeatedly defied predictions and continues to do so.

The new rise in cases comes at a complicated moment. Last Thanksgiving, before vaccines were available, federal and local officials urged Americans to forgo holiday gatherings. But in sharp contrast, public health officials, including Dr. Anthony Fauci, the nation's leading infectious-disease expert, have mostly suggested this year that vaccinated people could gather in relative safety.

In interviews across the country, Americans said they were not sure what to think.

Jess Helle-Morrissey, 43, a therapist who lives in St. Paul, Minn., said she has decided to host a dinner, although case rates in her state are among the country's worst. About 4,200 cases are emerging every day and hospitalizations are soaring in the state.

"They are diligent maskers and don't take any extra risks," she said of her guests. "Everyone who is coming, I keep saying, is, you know, vaxxed to the max."

In important ways, the country is in better shape than during previous upticks. Doctors have learned more about how to treat the virus and experts are hopeful that antiviral pills will soon be approved. Most crucially, many Americans have been vaccinated. The availability of those shots -- including the recent approval of booster doses for all adults -- has raised confidence for many who said they planned to proceed with holiday celebrations.

But about 50,000 coronavirus patients are hospitalized nationwide, and tens of millions of Americans have refused to be vaccinated. The course of the virus in Europe, where Austria is entering a lockdown and some areas of Germany have shut down Christmas markets, has raised fears about just how high case numbers might rise in the United States.

"The last thing I want is what Austria is doing," said Dr. Allison Arwady, the public health commissioner in Chicago, where cases have started rising. "I really, really don't want to go there."

Still, millions of Americans were forging ahead with holiday plans. Federal officials expected Thanksgiving air travel to approach pre-pandemic levels. And plenty of people who hit the road this year will be unvaccinated, unmasked and largely unworried about covid-19.

Many experts said the wide availability of vaccines, now authorized for everyone 5 and older, as well as at-home testing, make it possible for vaccinated people to host a relatively safe, although not risk-free, gathering.

Arwady said she planned to spend the holiday with extended family members, all of whom are vaccinated except young children who are not eligible. While reports of new cases in Illinois have increased 62% in the past two weeks, she said she wanted vaccinated people to feel confident going about their life and to enjoy Thanksgiving.

"Is there the potential for some spread? Of course there is," said Arwady, who suggested that unvaccinated adults consider staying home. "Are the people who are vaccinated, even if they haven't gotten a booster, likely to end up in the hospital or die? They're really not."

Osterholm said he worried about breakthrough cases in vaccinated people who did not have booster shots and about the potential for more mutations of the virus. Still, he, too, said he would gather for the holiday with vaccinated family members who live nearby.

Officials who once urged caution are now deferring to individuals to make their own decisions.

"It's really hard to tell people to stay away from their families," said Mayor Katie Rosenberg of Wausau, Wis., where cases have surged to their highest levels since late 2020. "I can't anymore."

Dr. Rebecca Smith, a public health researcher at the University of Illinois, said she planned to drive with her children to see family but would get tested before and after.

"People want to get back to normal and we understand that -- and there are ways to do that safely," she said.

Information for this article was contributed by Zeke Miller, Colleen Long and Alexandra Jaffe of The Associated Press; and by Mitch Smith of The New York Times. 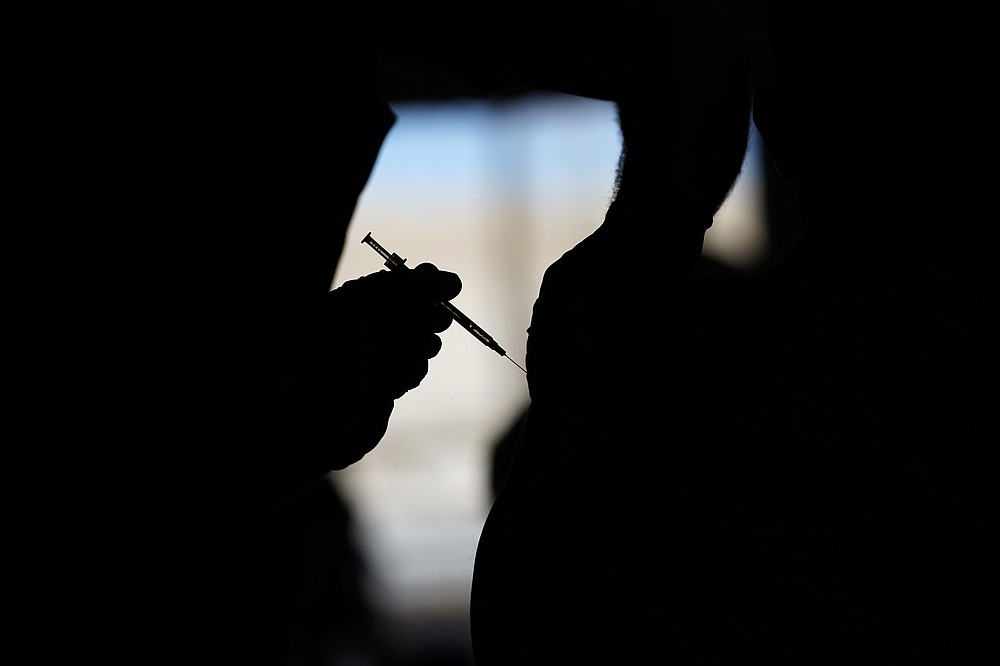 FILE - A man receives a COVID-19 vaccine at a vaccination site in Las Vegas. More than 90% of federal workers have received at least one dose of a COVID-19 vaccine by Monday&amp;#x2019;s deadline set by President Joe Biden. Biden announced in September that all federal workers were required to undergo vaccination, with no test-out option, unless they secured an approved medical or religious exemption. (AP Photo/John Locher, File)