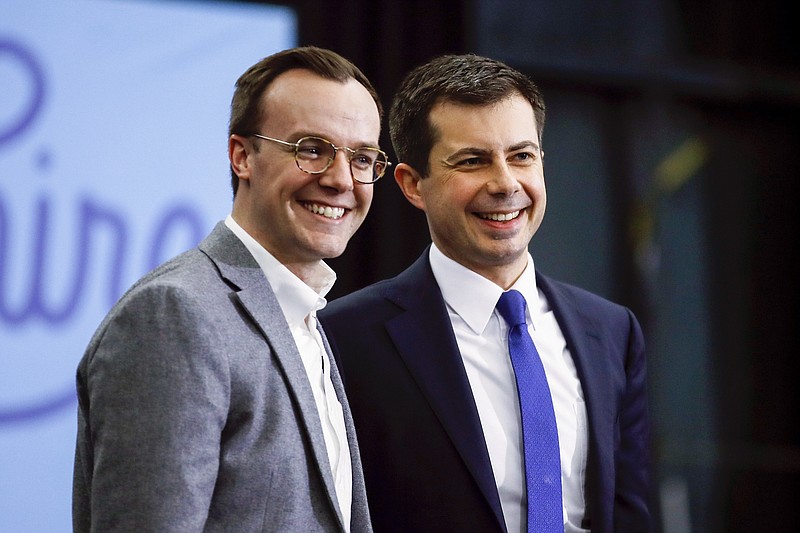 Chasten (left) and Pete Buttigieg smile to the crowd at a 2020 campaign event. The couple, and their unique situation, are profiled in “Mayor Pete,” now streaming on Amazon Prime. (AP file/Matt Rourke)

The Transportation secretary held court Nov. 15 at the White House press briefing, gushing about the big infrastructure legislation steaming its way to the president's desk. "We are excited with an exclamation point," the avowed policy wonk said, eager to discuss roads, rails and pipelines, oh my!

Now, his life, or up until now the most significant public turning point of that life, is streaming to the public with "Mayor Pete," a documentary about his 2020 campaign for president, on Amazon Prime Video.

Buttigieg, 39, has already secured a spot in history. He is the first openly gay person and first millennial confirmed by the Senate to a Cabinet position. His presidential campaign stood out in a crowded field as the former South Bend, Ind., mayor won the Iowa caucuses over more seasoned politicians like Biden and Sens. Kamala Harris, Bernie Sanders, Elizabeth Warren and Amy Klobuchar. He exited the race without burning any infrastructure, er, bridges, with the eventual nominee and president. That, ahem, paved the way for him to be tapped for his Transportation gig. And now he's the man at a time when Biden and Congress converted "Infrastructure Week" from punchline during the Trump administration to plan of action.

If that's all "Mayor Pete" explored, then it'd be a pretty run-of-the-mill political documentary, albeit one with the marketing muscle of Amazon and high production values.

But what filmmaker Jesse Moss also offers amid the balloon drops, strategy sessions and rope lines is the story of a political marriage, between Pete and Chasten Buttigieg. And, like any realistic portrayal of a marriage, there are highs and lows, moments of grace, and moments of tension, two people on the same page about their biggest decisions, and two people awkwardly disagreeing about fundamental issues of dignity and inclusion.

"Don't bull**** us, Peter," Chasten says at the start of the movie, as Pete is miked up. Despite Chasten's challenge, some BS does follow. Any good politician has to deploy it at some point.

But the off-the-beaten path scenes Moss captures are what make this documentary worth watching.

Good documentaries involve "big swings and risks," Moss said, explaining that he was drawn to the access to an up-and-comer like Buttigieg, rather than simply chronicling being on the trail itself. "I like the Capra-esque kind of romance of the folly," he added, a reference to Buttigieg amplifying his idiosyncratic, why-not-me campaign and the behind-the-scenes task of making that work. "I said: Sign me up. It's not going to go anywhere. ... But let's start and see if the access is for real," he said.

That access includes big moments, like when Buttigieg left the campaign trail for an emotionally charged town hall in South Bend in June 2019 after a white police officer shot and killed a Black man. And very personal, unguarded ones, like when Chasten asks Pete why he won't be up on stage with him like other candidates' spouses at the end of the night during Iowa's returns. We don't hear an answer, but we feel the hurt.

"Mayor Pete" ends with Buttigieg bowing out of the presidential race, returning to South Bend, grateful to be able to wear sweats again. It notes his elevation to the Cabinet and hints he's not done with his political climb. It's early in his professional life.

On a personal level, it's also still early, and the movie shows the fault lines a partner to a powerful politician must negotiate. Many political marriages involve years, even decades of negotiations and trade-offs. Pete and Chasten have been married since June 2018, less than a year before Pete launched his presidential campaign.

This summer, as Mayor Pete settled into the role of Secretary Pete, The Washington Post profiled Chasten. The former first gentleman of South Bend was finding his way in the new company town of D.C., figuring out which gyms to avoid because of eager lobbyists as well as cultural lifelines at Kramers bookstore in Dupont Circle and Mr. Henry's on Capitol Hill. Even compared to the trail, life was different, and weird. "Like, anytime you think you're just relaxing, you're working," Chasten told the Post. "Especially on the Hill. Cocktails, dinners, drinks. Everyone says, 'No work tonight.' Then two minutes go by and they're talking about a pipeline, you know, or a bill or a package," he continued.

But it's still early, in Biden's term, in Pete's career, in Pete and Chasten's marriage. The couple just announced the birth of their adopted twins, Penelope Rose and Joseph August, in September.

Such are the scenes from a young political marriage.