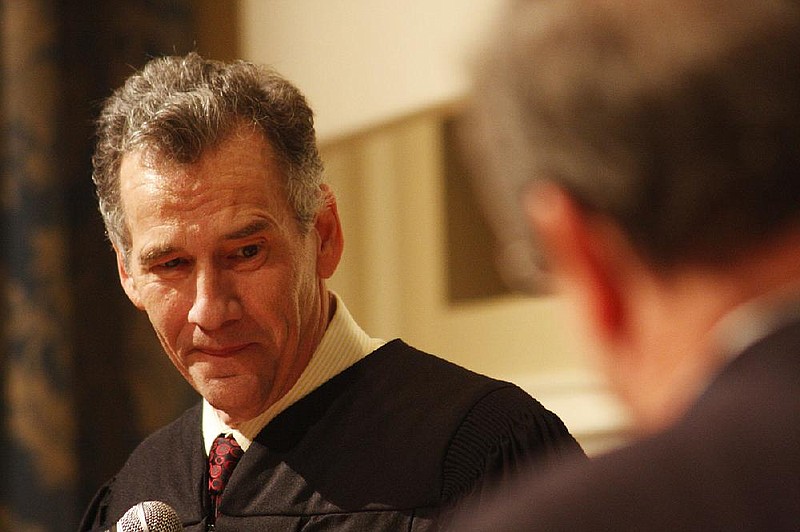 Dr. Jose Romero, the state secretary of health, said authorities reached that conclusion, soon to be published in an unnamed top scholarly journal, based on "very solid" findings. Dr. Michael Cima, state epidemiologist, said officials surveyed Arkansas schools from the start of the school year in August through Oct. 16, comparing schools that imposed a masking requirement with ones that did not, to reach their conclusions.

Romero and Cima previewed a draft of the study in testimony before Pulaski County Circuit Judge Tim Fox during a daylong trial over lawsuits challenging the legality of Arkansas' mask-mandate ban. Fox will not reach any conclusions soon. He set a Dec. 10 deadline for the sides to submit final written arguments.

Defending the mandate prohibition is the attorney general's office, and Assistant Attorney General Sam Strange told the judge that there is no legal basis to overturn the law.

Legislators knew there were conflicting theories about how well masks worked when lawmakers approved the mandate ban as an exercise in their public-safety duties. The courts cannot overturn the law just because judges come to a different conclusion, he said.

The judge has already found sufficient grounds that the prohibition is unconstitutional based on legal arguments alone. After an August hearing, Fox temporarily barred authorities from enforcing the mandate ban, with a finding that the law discriminated against public-school children, usurped judicial authority, limited the governor's emergency powers and infringed on the power of county officials.

Act 1002 of 2021 was passed in April by the General Assembly to prohibit government agencies from requiring masks. However, the law has its exceptions. Prisons, juvenile detention facilities and state health care operations could impose mask bans. However, county and private hospitals cannot. Neither can county jails. The reason for those exceptions went unexplained at Monday's proceeding.

The legality of the mandate ban is at issue due to a lawsuit by the Little Rock and Marion school districts, and a suit by two Little Rock parents, Veronica McClane and Ashley Simmons, that was later joined by Pulaski County Judge Barry Hyde, the county's chief administrator, and Sheriff Eric Higgins.

The sides called 12 witnesses, including representatives of the governor. Hutchinson is a nominal defendant in the case because he signed the mandate ban into law, a step he said he now regrets. Romero, testifying as a witness for the schools, told the judge that Hutchinson does not endorse a mask mandate but supports letting the districts decide for themselves if face coverings should be required.

Hutchinson did not attend the day-long proceeding, but his lawyer, David Matthews of Rogers, told the judge the governor is very concerned about the potential for the mandate ban putting the state's National Guard at risk when the militia members are called on to provide assistance in emergency situations.

Matthews offered the scenario of the Guard being used to evacuate a hospital or nursing home due to a natural disaster like a flood.

Depending on the ownership of the facility, the mandate ban could preclude the Guard coming to the rescue in emergency situations, Guard commander Major General Kendell Penn told the judge. The law would not allow him to require his soldiers to wear masks, even if he's certain they will be exposed to covid, if they're called to rescue a county-operated hospital or private health-care operation.

"I need the authority to protect the Guard's members and who they come into contact with," Penn testified, describing the prohibition as a restriction of the governor's constitutional public-safety powers.

Endorsements for the mandate came from witnesses like Dr. Gerry Jones, the chief medical officer at CHI St. Vincent. Jones said the consensus of the Arkansas medical community is that masks are "very effective" at curtailing virus transmission. Vaccines are "amazingly" effective, Jones said.

But face coverings will continue to be an important part of prevention strategy as long as the vaccines are not 100 percent effective, he testified

McClane, one of two parent plaintiffs, testified that the only way masks can truly work is if as many people as possible wear them.

"I want to keep my children safe. It's my understanding masks are most effective if everyone wears them." She said. "All of the long-term impacts of ... the deadly virus far outweigh the discomfort of wearing a mask..

The married mother of two, a therapist and licensed social worker, said she's kept her oldest, 8-year-old Walter, in virtual learning although the boy craves the company of his classmates and the dependability of his teachers.

"I was basically told ... there was no way they could protect my child in class," McClane, 38, said.

Testifying for the Pulaski County plaintiffs, Ronnie Routh, director of the county juvenile detention center which houses children accused of criminal behavior, told the judge that masks are the facility's first-line of defense against infection.

"That's the first thing we do is put a mask on them ... because we don't know where they've been and who they've been in contact with," Routh said. "All of the time they're with us ... we have them in masks."

He said masks are a simple precaution that the center can use because it cannot require that children be vaccinated,.

"I just want to do everything I can do to make sure my kids are safe."