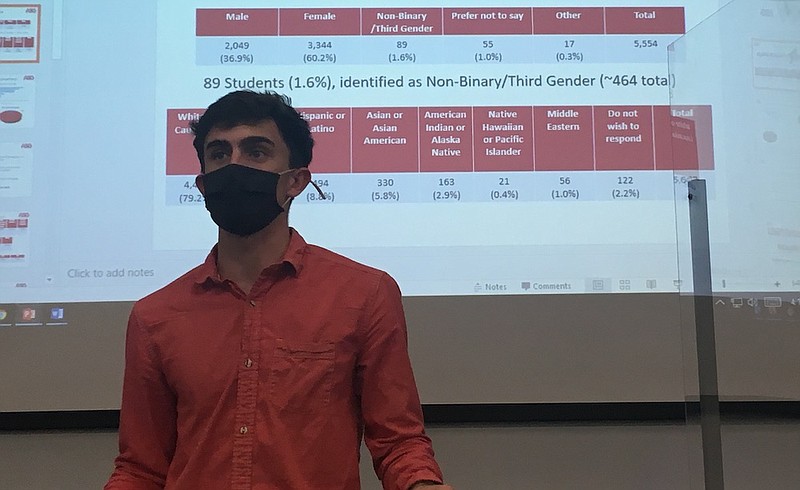 Coleman Warren, student body president at the University of Arkansas, Fayetteville, on Nov. 10, 2021 presents the results of an Associated Student Government survey of students to the university's faculty senate. (Jaime Adame/Arkansas Democrat-Gazette)

FAYETTEVILLE -- Coleman Warren, a senior at the University of Arkansas, Fayetteville, has been named a Rhodes scholar, the first winner to be announced as an Arkansan in five years and the first UA student since 2000.

Warren, from Farmington, is one of 32 U.S. students selected for an honor that includes all-expenses paid graduate study, typically for two or three years, at the University of Oxford in England.

The first Rhodes scholars entered the University of Oxford in 1904, and the honor is considered among the most prestigious for U.S. students. Warren will begin his graduate studies in October of next year, pursuing a graduate degree in comparative social policy.

Scholars are selected based on academic excellence, a commitment to the welfare of others and "great promise of leadership," among other criteria, said Elliot F. Gerson, American secretary of the Rhodes Trust, in a statement.

Applicants must receive an endorsement from their college or university, with this year's winners chosen from 826 candidates endorsed by 247 different colleges and universities.

Warren, 21, is majoring in industrial engineering and political science at UA, where he's the student body president.

His undergraduate honors thesis is about the accessibility of food pantries in Washington County, and he's also the founder of a small-batch ice cream company, Simple + Sweet Creamery, which donates 50% of its profits to fighting child hunger, according to its website, with donations going to the Northwest Arkansas Food Bank.

Earlier this year, Warren was named a Harry S. Truman Scholar, one of 62 students nationally to receive an award given out based on academic success, leadership and the likelihood of becoming a public service leader.

"Coleman has made a significant difference throughout his academic career but especially as [Associated Student Government] president," UA Interim Chancellor Charles Robinson said in a statement. "He has worked on a variety of important issues here and in the community, all while being a stellar student. I am very proud of him and his many accomplishments, that go well beyond the winning of this high honor."

Warren, in a statement, thanked those who helped him apply for the honor.

"Eight wonderful people wrote letters for me, dedicated faculty members participated in practice interviews, and accomplished research mentors and stellar leadership advisors counseled me along the way," Warren said. "Now, I have the opportunity to build on that support and to learn at Oxford more about how to address persistent problems like poverty and food insecurity and then return home to put all I have learned into practice as we work to address the challenges that face our state and country."

In a phone interview, Warren praised Suzanne McCray, UA's top admissions official, for her help as he applied for the nationally-competitive scholarship awards and prepared for interviews that are a part of the selection process.

He also thanked those in the community of Farmington, a town of about 7,500 people just a few miles west of Fayetteville.

Warren was born in Fayetteville, but he said his "entire upbringing" took place in Farmington.

"Some of the first people I called when I found out I won were high school teachers," Warren said.

Warren is engaged to be married to a fellow UA senior, Bailee King. He said the couple will be traveling to England together, but the plan is to return to Arkansas.

"We want to make it a better place," Warren said of his home state.

He said his work in fighting food insecurity was inspired by a summer in 2019 working as part of the AmeriCorps VISTA program in Nebraska at the Food Bank for the Heartland.

"They have a summer feeding program for kids," Warren said.

Working that summer to help them, "they changed my life in every way," Warren said, adding that Arkansas has a higher food insecurity rate than Nebraska.

In 2016, Lauren Jackson, from Little Rock, was announced as a Rhodes scholar while studying at the University of Virginia.

Warren is the first Arkansan studying at an Arkansas college to win the honor since Rhett Martin, an Atkins native, was named a 2002 Rhodes Scholar while studying at the University of Central Arkansas.

The University of Arkansas, Fayetteville has had 11 students win the honor. Anna Terry, a 2001 Rhodes scholar and Fort Smith native, had been the most recent UA honoree.