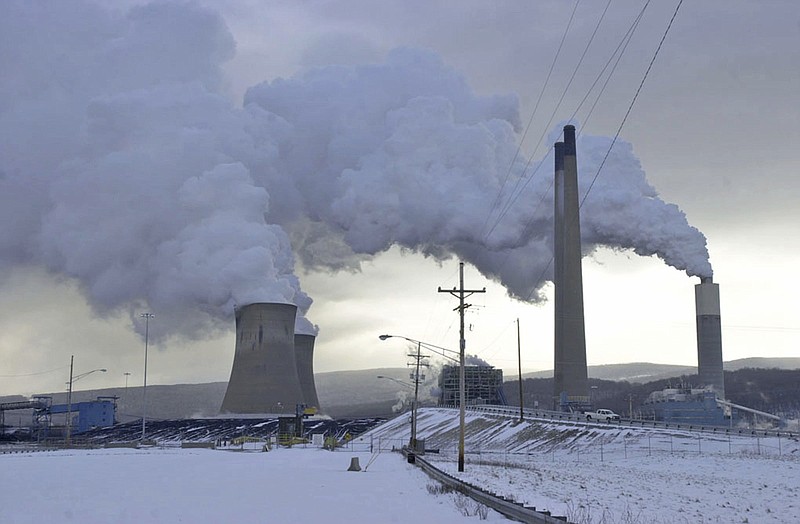 FILE - Smoke billows from the Conemaugh Generation Station in New Florence, Pa., Feb. 6, 2007. Climate change isn?t what?s driving some U.S. coal-fired power plants to shut down. It's the expense of stricter pollution controls on their wastewater. Those that intend to close include two of Pennsylvania's largest coal-fired power plants, Keystone and Conemaugh outside Pittsburgh, which said they will stop using coal and retire all of their generating units by Dec. 31, 2028, according to regulatory notices obtained separately by The Associated Press. (Todd Berkey/The Tribune-Democrat for the AP)

Climate change isn't what's driving some U.S. coal-fired power plants to shut down. It's the expense of stricter pollution controls on their wastewater.

Dozens of plants nationwide plan to stop burning coal this decade to comply with more stringent federal wastewater guidelines, according to state regulatory filings, as the industry continues moving away from the planet-warming fossil fuel to make electricity.

The new wastewater rule requires power plants to clean coal ash and toxic heavy metals such as mercury, arsenic and selenium from plant wastewater before it is dumped into streams and rivers. The rule is expected to affect 75 coal-fired power plants nationwide, according to the Environmental Protection Agency.

Those plants had an October deadline to tell their state regulators how they planned to comply, with options that included upgrading their pollution-control equipment or retiring their coal-fired generating units by 2028.

The national impact of the wastewater rule is still coming into focus, but at least 26 plants in 14 states said they will stop burning coal, according to the Sierra Club, which has been tracking state regulatory filings. Twenty-one of the plants intend to shut down, and five indicated they may switch to natural gas, the environmental group said.

The rule will reduce the discharge of pollutants into the nation's waterways by about 386 million pounds annually, according to EPA estimates. It's expected to cost plant operators, collectively, nearly $200 million per year to implement.

Power producers that say they will shutter coal-fired units as a result of the new rule include Atlanta-based Southern Co. and Houston-based NRG. Southern, which operates electric utilities in Georgia, Alabama and Mississippi, said it will shutter two-thirds of its coal fleet, including units at the nation's two largest coal-fired power plants, Scherer and Bowen, both in Georgia. NRG said it plans to stop burning coal at its domestic plants outside Texas, and install new pollution controls at its two Texas plants.

The electric power sector has spent years transitioning from coal to cheaper, cleaner-burning natural gas and renewables such as wind and solar. Nationwide, about 30% of generating capacity at coal plants has been retired since 2010, according to the Energy Information Administration. Coal use at power plants is expected to surge more than 20% this year because of sharply higher natural gas prices -- the first such increase since 2014 -- but the energy agency said it expects that trend to be temporary.

The long-term move away from coal has been pronounced in Pennsylvania, the nation's No. 3 coal-producing state after Wyoming and West Virginia. Coal's share of electrical power generation in the state declined from nearly half in 2010 to 10% last year, with operators taking advantage of a statewide boom in natural gas drilling in the Marcellus Shale, the nation's largest gas field. Seventeen Pennsylvania coal plants have been retired since 2009.

"The smallest, oldest [coal] plants were generally the ones the economics killed first. They were too expensive and too small to be retrofitted to meet new EPA standards," said Jean Reaves Rollins, president of The C Three Group, a market research firm focused on energy infrastructure and utilities.

She said coal plants in competitive electricity markets such as Pennsylvania's have also come under pressure. "It is clear in the case of the two Pennsylvania plants, the cost of compliance will put them out of the economic running," she said.

Pennsylvania and neighboring Ohio have accounted for 20% of all coal-fueled power plant shutdowns in the U.S. in recent years, according to federal data.

Plants that intend to close include two of Pennsylvania's largest coal-fired power plants, Keystone and Conemaugh outside Pittsburgh, which said they will stop using coal and retire all of their generating units by Dec. 31, 2028, according to regulatory notices obtained separately by The Associated Press. The plants opened more than 50 years ago.

Industry officials contend the mothballing of so many coal plants carries consequences for the nation's electric grid. Michelle Bloodworth, president and chief executive officer of America's Power, a trade organization that advocates on behalf of coal-fueled electricity, cited last winter's blackouts in Texas and elsewhere as examples of "what happens when you go too far too fast."

"We are monitoring the situation currently but we do remain concerned that overly aggressive policies that lead to the premature retirement of dispatchable generation like the coal fleet will jeopardize the reliability and resilience of the electricity grid," Bloodworth said.

Experts have pointed out that in the case of last winter's huge Texas blackout, most of the megawatts that went offline were generated by gas, coal and nuclear plants.