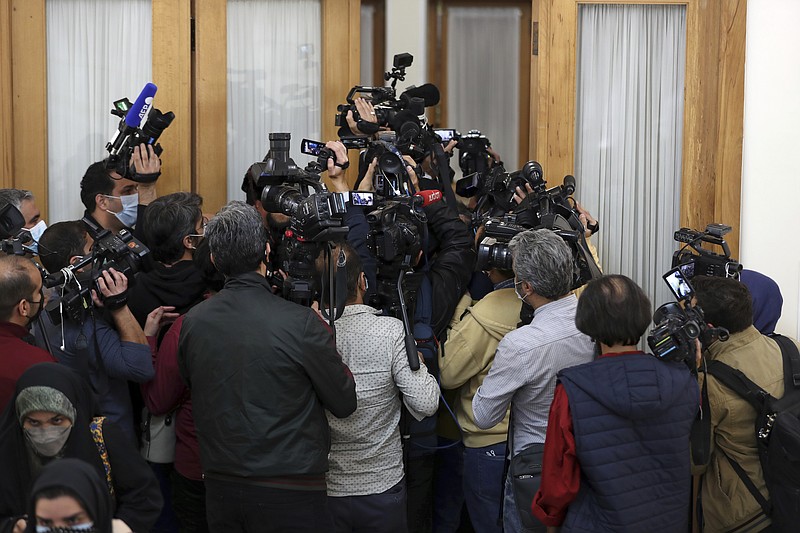 Journalists try to enter the room where the head of the International Atomic Energy Agency, IAEA, Rafael Mariano Grossi and Iranian Foreign Minister Hossein Amirabdollahian are meeting, in Tehran, Iran, Tuesday, Nov. 23, 2021. The head of the United Nations' atomic watchdog met Tuesday with Iranian officials to press for greater access in the Islamic Republic ahead of diplomatic talks restarting over Tehran's tattered nuclear deal with world powers. (AP Photo/Vahid Salemi)

TEHRAN, Iran -- The head of the United Nations' atomic watchdog met with Iranian officials Tuesday to press for greater access in the Islamic Republic ahead of diplomatic talks restarting over Tehran's tattered nuclear deal with world powers.

In the wake of then-President Donald Trump's unilateral withdrawal from Iran's deal, the Islamic Republic now enriches small amounts of uranium up to 60% purity -- its highest ever and close to weapons-grade levels of 90%.

While Iran maintains its program is peaceful, regional rival Israel has repeatedly warned it won't allow Tehran to build a nuclear weapon and is suspected of launching attacks targeting its program as part of a wider regional shadow war playing across the Mideast in recent years. The U.S. under President Joe Biden, meanwhile, has said it's willing to return to the deal, but has warned that time is running out.

All this raises the risk of a wider confrontation with Iran, which has taken a harder tack ahead of the talks under new President Ebrahim Raisi, a protege of Supreme Leader Ayatollah Ali Khamenei.

Writing on Twitter on Monday, Grossi said he hoped to "address outstanding questions" with Iranian officials.

"I hope to establish a fruitful and cooperative channel of direct dialogue so the (IAEA) can resume essential verification activities in the country," Grossi wrote.

On Tuesday, Grossi went to the Atomic Energy Organization of Iran, the country's civilian nuclear agency, on his third visit since February. He spoke with Mohammad Eslami, the new head of the organization.

The U.N. in 2008 sanctioned Eslami for "being engaged in, directly associated with or providing support for Iran's proliferation sensitive nuclear activities or for the development of nuclear weapon delivery systems."

After their talk, Eslami gave a news conference in which he described the issues as "technical" and not governed by the "political issues and conspiracies" of Iran's enemies.

"Some parts are yet to be answered and some parts have to do with issues that have already been closed in the past," he said. "They have been addressed in the nuclear deal and have been closed. Today, we agreed to put an end to them."

Eslami did not elaborate.

Grossi for his part described the talks as "intense" and was not as definitive.

"We are continuing at this point our negotiations with a view to finding common ground," Grossi said.

He later met Iranian Foreign Minister Hossein Amirabdollahian, who said Iran was set on "constructive engagement" with the IAEA to "improve mutual trust and cooperation," according to a report by the state-run IRNA news agency.

Under a confidential agreement called an Additional Protocol with Iran, the IAEA collects and analyzes images from a series of surveillance cameras installed at Iranian nuclear sites. Those cameras help it monitor Tehran's program to see if it is complying with the nuclear deal.

Iran's hard-line parliament in December 2020 approved a bill that would partly suspend U.N. inspections of its nuclear facilities if European signatories did not provide relief from oil and banking sanctions by February. Since then, the IAEA has been unable to access imagery from those cameras.

Under the deal, the IAEA also placed around 2,000 tamper-proof seals on nuclear material and equipment. The seals communicated electronically to inspectors. Automated measuring devices also provided real-time data from the program.

Inspectors haven't been able to access that data either, making the task of monitoring Iran's enriched uranium stockpile that much more difficult.

Tuesday's meeting comes ahead of a wider meeting of the IAEA member states. Iran avoided facing a censure vote at the board with a similar Grossi visit in September.

Meanwhile in Israel, Prime Minister Naftali Bennett described Iran's nuclear program as being in a "very advanced stage," without providing details. Ahead of the resumption of nuclear talks between global powers and Iran, Bennett said he expects "disagreement with our greatest of friends."

"Either way, even with the return to an agreement, Israel is of course not part of the agreement. Israel is not bound by it," he said at a security conference in Herzliya. "We will maintain our freedom to act."

Information for this article was contributed by Tia Goldenberg of The Associated Press.