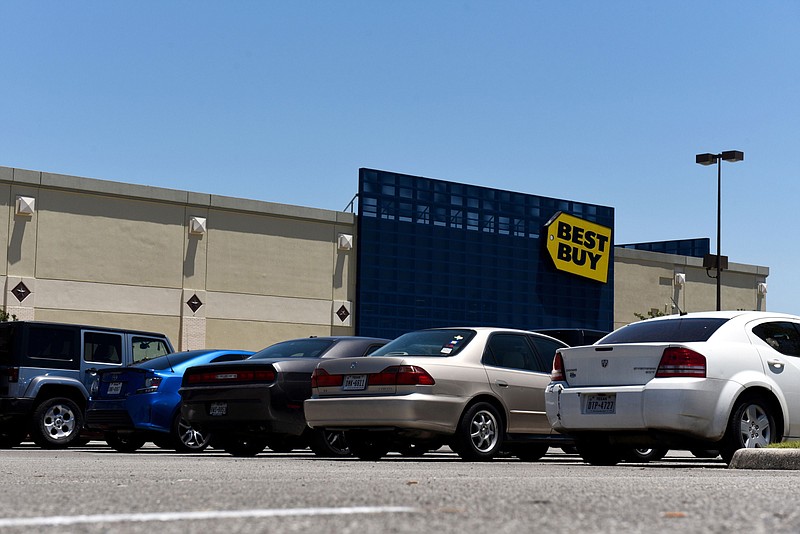 Vehicles sit parked outside a Best Buy Co. store in San Antonio on May 17, 2018. MUST CREDIT: Bloomberg photo by Callaghan O'Hare.

Best Buy Co. tumbled the most since the start of the pandemic as increased robberies by organized groups of thieves add to an array of profit pressures while Wall Street frets about the outlook for holiday sales.

Burglaries range from dozens of people rushing into stores and grabbing merchandise to theft by smaller groups, some of them brandishing guns or crowbars, Chief Executive Officer Corie Barry told reporters Tuesday. Northern California has been a particular trouble spot, she said, but Best Buy has seen pockets of criminal activity all over the country.

Best Buy flagged the impact of robberies just as it's struggling to keep pace with soaring investor expectations, and theft is far from the only financial headache. While Best Buy topped expectations for third-quarter profit and sales, gross margin -- a broad measure of profitability -- got hit by stepped-up promotional activity and a drag from a new membership program. And slowing sales growth suggests that a pandemic-era boom is waning.

Best Buy shares plunged 12.3% in New York after sliding as much as 17% for the biggest intraday decline since March 2020. The shares had advanced 38% this year through Monday, outpacing the 28% gain of an S&P 500 index of consumer discretionary companies.

The retailer's credit default swaps widened Tuesday, with the cost to protect the company's debt against default rising to the highest level since March.

Gross margin edged down 0.1 percentage point to 23.5%, Best Buy said in an earnings statement. The company also reported a 10% drop in domestic online revenue as more shoppers returned to stores.

The pullback in Best Buy's shares follows an almost two-month rally that contributed most of the stock's year-to-date gain. Declines in gross margin at Walmart Inc. and Target Corp. spurred sell-offs in each company's shares last week.

Best Buy's adjusted earnings rose to $2.08 a share, compared with the $1.96 average of analyst estimates compiled by Bloomberg. Sales climbed to $11.9 billion. Analysts had predicted $11.7 billion.

Estimates of the financial impact of retail theft vary. A September report by the Illinois attorney general cited an estimate from the Coalition of Law Enforcement and Retail that organized theft accounts for $45 billion in annual losses. The Retail Industry Leaders Association has said as much as $68.9 billion in products was stolen from retailers in 2019.

Information for this article was contributed by Jack Pitcher and Augusta Saraiva of Bloomberg News (WPNS).