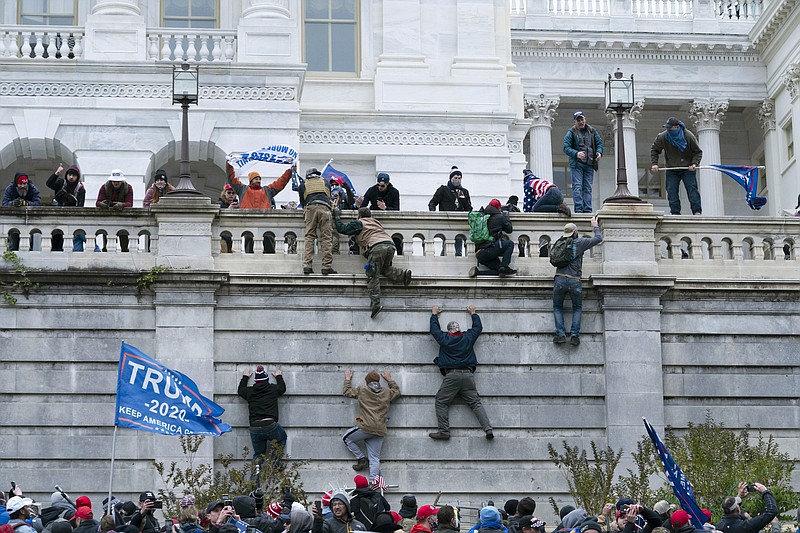 FILE - In this Jan. 6, 2021, file photo, supporters of then President Donald Trump climb the west wall of the the U.S. Capitol in Washington. The House committee investigating the Jan. 6 insurrection at the U.S. Capitol has &#x201c;deferred&#x201d; its requests for several dozen pages of Trump administration records at the White House&#x2019;s urging. But President Joe Biden has again rejected the former president&#x2019;s invocation of executive privilege on hundreds of additional pages. (AP Photo/Jose Luis Magana, File)

WASHINGTON -- The House committee investigating the Jan. 6 U.S. Capitol insurrection issued more subpoenas Tuesday, this time to extremist organizations, including the Proud Boys and the Oath Keepers as well as their leaders, in an attempt to uncover the plotting and execution of the deadly attack.

"The Select Committee is seeking information from individuals and organizations reportedly involved with planning the attack, with the violent mob that stormed the Capitol on January 6th, or with efforts to overturn the results of the election," Rep. Bennie Thompson, D-Miss., chairman of the panel, said in a statement.

The subpoenas are the latest in a wide net the House panel has cast in an effort to investigate the riot, when supporters of former President Donald Trump, fueled by his false claims of a stolen election, assaulted police and smashed their way into the Capitol to interrupt the certification of Democrat Joe Biden's victory.

The committee has already interviewed more than 150 people across government, social media and law enforcement, including some former Trump aides who have been cooperative. The panel has subpoenaed more than 20 witnesses, and most of them, including several who helped plan the "Stop the Steal" rally the morning of Jan. 6, have signaled they will cooperate.

The latest subpoenas were issued to the Oath Keepers, the Proud Boys and the 1st Amendment Praetorian organizations as well as their members, requesting documents and testimony.

Henry "Enrique" Tarrio, chairman of the Proud Boys, was among those subpoenaed. He hasn't been charged in the riot, as he had been arrested in an unrelated vandalism case as he arrived in Washington two days earlier and was ordered out of the area by a judge. Law enforcement later said Tarrio was picked up in part to help quell potential violence.

But despite him not being present, the committee believes he may have been involved in the Proud Boys' preparation for the events at the Capitol.

More than 30 Proud Boys leaders, members or associates are among those charged in connection with the attack. The group of self-described "Western chauvinists" emerged from far-right fringes during the Trump administration to join mainstream GOP circles, with allies like longtime Trump backer Roger Stone. The group claims it has more than 30,000 members nationwide.

The committee on Tuesday also subpoenaed the Oath Keepers -- a militia group founded in 2009 that recruits current and former military, police and first responders -- and its founder and leader, Elmer Stewart Rhodes. The panel says Rhodes may have suggested members should engage in violence to change the election outcome and that he was in contact with several of the more than a dozen indicted Oath Keepers members before, during and after the attack, including meeting some of them outside the Capitol.

Rhodes has said there were as many as 40,000 Oath Keepers at its peak, but one extremism expert estimates the group's membership stands at about 3,000 nationally. Rhodes didn't immediately respond to a request for comment.

The last organization on the committee's list Tuesday was the 1st Amendment Praetorian, founded by a QAnon believer, which claims to provide free security for "patriotic and religious events across the country."

Its chairman, Robert Patrick Lewis, is wanted by the committee after being listed as a speaker on the permit for a Jan. 5 rally on Freedom Plaza in downtown Washington. On the day of the attack, Lewis tweeted: "Today is the day that true battles begin."

Information for this article was contributed by Jacques Billeaud of The Associated Press.