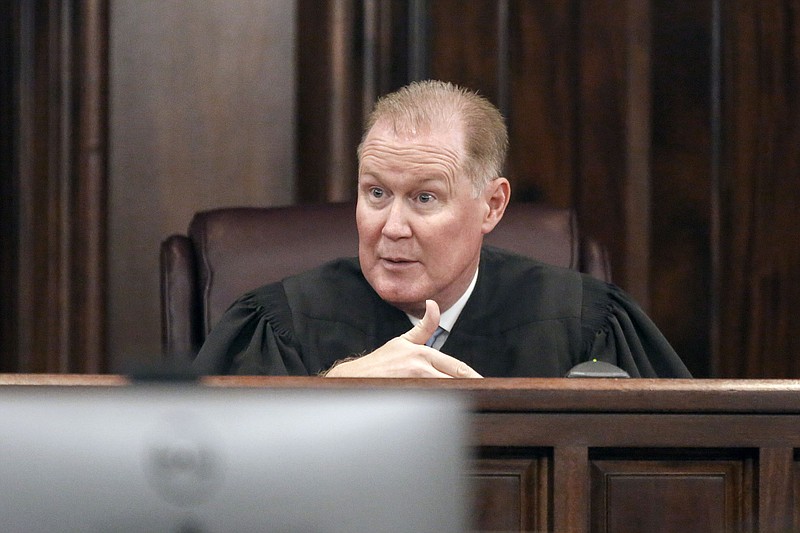 Judge Timothy Walmsley speaks during the trial of William &quot;Roddie&quot; Bryan, Travis McMichael and his father Gregory McMichael, all charged with the February 2020 death of 25-year-old Ahmaud Arbery, Tuesday, Nov. 23, 2021, at the Glynn County Courthouse in Brunswick, Ga. (Octavio Jones/Pool Photo via AP)

BRUNSWICK, Ga. -- Jurors in the case of three men charged with killing Ahmaud Arbery deliberated for about six hours Tuesday without reaching a verdict as they weighed prosecution arguments that the defendants provoked the fatal confrontation against defense attorneys' insistence that their clients acted in self-defense.

[Video not showing up above? Click here to watch » arkansasonline.com/1124trial/]

After initially indicating they wanted to work into the evening, the jurors were soon dismissed by the judge with instructions to resume deliberations this morning.

"We are in the process of working to reach a verdict," the foreperson told Superior Court Judge Timothy Walmsley.

After more than two weeks of testimony and closing arguments, the prosecution got the last word because it carries the burden of proving its case beyond a reasonable doubt.

Prosecutor Linda Dunikoski spent two hours Tuesday morning hammering at defense attorneys' attempts to blame the 25-year-old Black man for his own death. Defense attorneys said Arbery lashed out violently with his fists to resist a lawful citizen's arrest by the defendants, who are white.

"You can't claim self-defense if you are the unjustified aggressor," Linda Dunikoski told jurors in her final statement. "Who started this? It wasn't Ahmaud Arbery."

Dunikoski said Arbery's pursuers had "no badge, no uniform, no authority" and were "just some strange guys in a white pickup truck." And she cited their own words to police immediately after the shooting, when they said they saw Arbery running but were unsure if he had committed a crime.

"You can't make a citizen's arrest because someone's running down the street and you have no idea what they did wrong," Dunikoski said.

Once the prosecution wrapped up, the judge gave instructions to the disproportionately white jury on how to apply the law before the panel started deliberations at the Glynn County Courthouse in the port city of Brunswick.

Arbery's killing became part of the national reckoning on racial injustice after a graphic video of his death leaked online two months later.

Father and son Greg and Travis McMichael grabbed guns and pursued Arbery in a pickup after spotting him running through their subdivision on Feb. 23, 2020. A neighbor, William "Roddie" Bryan, joined the chase and recorded the video of Travis McMichael opening fire as Arbery threw punches and grabbed for McMichael's shotgun.

No one was charged in the killing until Bryan's video leaked and the Georgia Bureau of Investigation took over the case from local police. All three men are charged with murder and other offenses.

Dunikoski said Tuesday that the McMichaels and Bryan threatened Arbery both with their trucks and by pointing a shotgun at him before the final confrontation in which Arbery threw punches and grabbed for the gun.

She noted that Bryan told police he used his truck to run Arbery into a ditch and cut off his route, while Greg McMichael told officers they had him "trapped like a rat." The actions of both men, she said, directly contributed to Arbery's death.

"It doesn't matter who actually pulled the trigger," Dunikoski said. "Under the law, they're all guilty."

She also said there was no evidence that Arbery had committed any crime in the defendants' neighborhood. She said he was never seen stealing anything the five times he was recorded by security cameras in a home under construction from which he was seen running.

"You've got lumber, you've got all this stuff," Dunikoski said. "Mr. Arbery never shows up with a bag. He doesn't pull up with a U-haul. ... All he does is wander around for a few minutes and then leave."

The prosecutor told jurors someone can make a citizen's arrest only in "emergency situations" where a crime is happening "right then and there."

Defense attorneys objected to Dunikoski's explanation of citizen's arrest because they contend the McMichaels had reason to suspect Arbery had stolen items from the home. They said the owner discovered items missing before he installed security cameras.

"This is a misstatement of the law and the argument is improper," Franklin Hogue, an attorney for Greg McMichael, told the judge. "There's no way we can fix it" before the jury, he said, because defense attorneys finished their closing arguments Monday.

Attorney Jason Sheffield said his client, Travis McMichael, fired his shotgun in self-defense after Arbery charged at him, threw punches and tried to grab the weapon. Sheffield called Arbery's death a tragedy, but one that was his own fault.

Attorneys for the other two defendants blamed Arbery as well. Laura Hogue, also an attorney for Greg McMichael, said Arbery "chose to fight." Kevin Gough, who represents Bryan, questioned why Arbery didn't call for help if he was in danger. 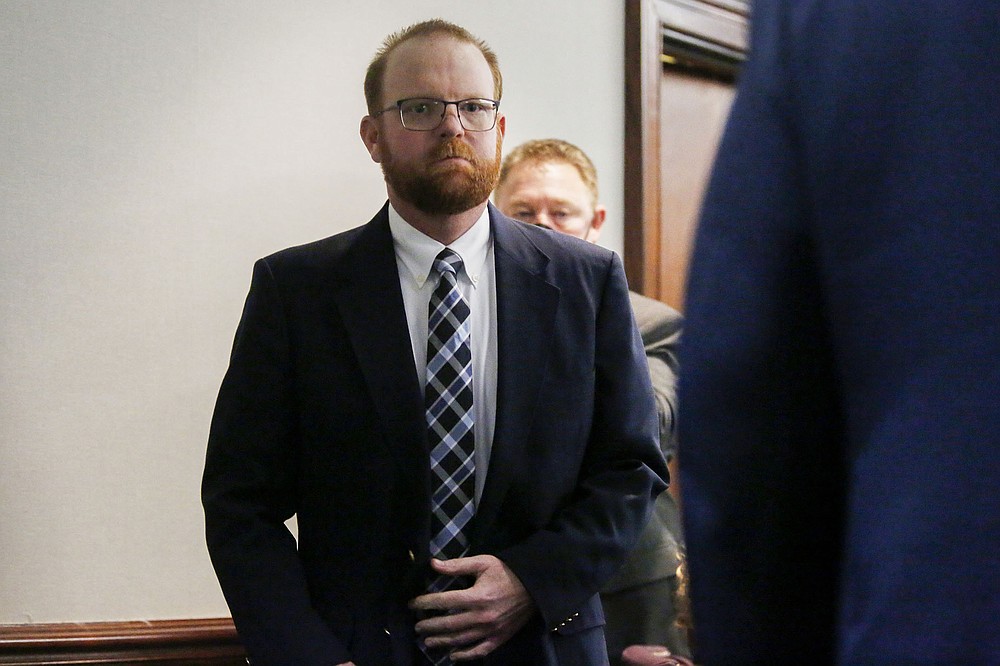 Defendant Travis McMichael is seen during the trial of William &quot;Roddie&quot; Bryan, Travis McMichael and his father Gregory McMichael, all charged with the February 2020 death of 25-year-old Ahmaud Arbery, Tuesday, Nov. 23, 2021, at the Glynn County Courthouse in Brunswick, Ga. (Octavio Jones/Pool Photo via AP)