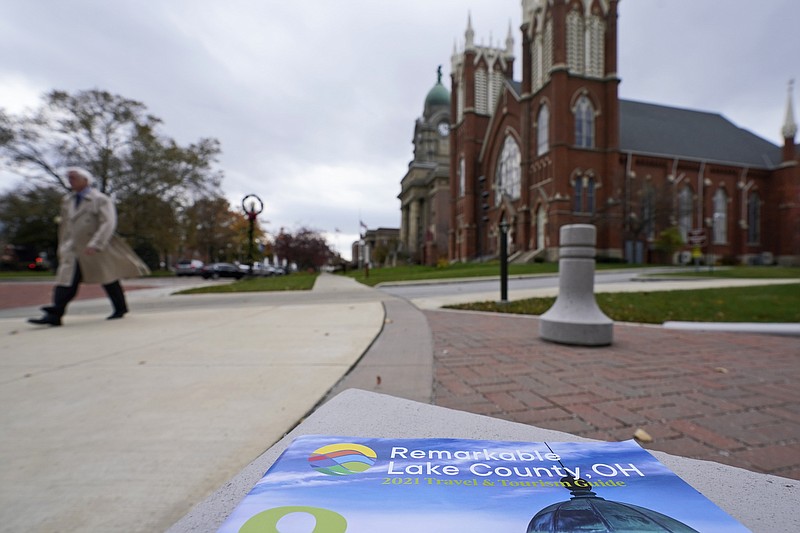 A man walks through downtown Painesville, Ohio, in Lake County, on Wednesday, Nov. 17, 2021. Three retail pharmacy chains recklessly distributed massive amounts of pain pills in two Ohio counties, a federal jury said Tuesday, Nov. 23, 2021, in a verdict that could set the tone for U.S. city and county governments that want to hold pharmacies accountable for their roles in the opioid crisis. (AP Photo/Tony Dejak)

CLEVELAND -- A federal jury decided Tuesday that CVS, Walgreens and Walmart pharmacies recklessly distributed massive amounts of pain pills in two Ohio counties, a verdict that could set the tone for U.S. city and county governments that want to hold pharmacies accountable for their roles in the opioid crisis.

Lake and Trumbull counties blamed the three chain pharmacies for not stopping the flood of pills that caused hundreds of overdose deaths and cost each of the two counties about $1 billion, said their attorney, who in court compared the pharmacies' dispensing to a gumball machine.

How much the pharmacies must pay in damages will be decided in the spring by a federal judge.

It is the first time the retail segment of the drug industry has been held accountable in the epidemic that has killed a half-million Americans over the past two decades..

The counties convinced the jury that the pharmacies played an outsize role in creating a public nuisance in the way they dispensed pain medication into their communities.

"The law requires pharmacies to be diligent in dealing drugs. This case should be a wake-up call that failure will not be accepted," said Mark Lanier, an attorney for the counties.

Attorneys for the pharmacy chains maintained they had policies to stem the flow of pills when their pharmacists had concerns and would notify authorities about suspicious orders from doctors. They also said it was doctors who controlled how many pills were prescribed for legitimate medical needs.

Walmart said in a statement that the counties' attorneys sued "in search of deep pockets while ignoring the real causes of the opioid crisis -- such as pill mill doctors, illegal drugs, and regulators asleep at the switch -- and they wrongly claimed pharmacists must second-guess doctors in a way the law never intended and many federal and state health regulators say interferes with the doctor-patient relationship."

Walgreens spokesman Fraser Engerman characterized the case as an unsustainable effort "to resolve the opioid crisis with an unprecedented expansion of public nuisance law."

The company "never manufactured or marketed opioids nor did we distribute them to the 'pill mills' and internet pharmacies that fueled this crisis," Engerman said in a statement.

A statement from CVS spokesman Mike DeAngelis said: "As plaintiffs' own experts testified, many factors have contributed to the opioid abuse issue, and solving this problem will require involvement from all stakeholders in our health care system and all members of our community."

Roughly 80 million prescription painkillers were dispensed in Trumbull County alone between 2012 and 2016 -- equivalent to 400 for every resident. In Lake County, some 61 million pills were distributed during that period.

The rise in physicians prescribing pain medications such as oxycodone and hydrocodone came as medical groups began recognizing that patients have the right to be treated for pain, Kaspar Stoffelmayr, an attorney for Walgreens, said at the opening of the trial.

The problem, he said, was "pharmaceutical manufacturers tricked doctors into writing way too many pills."

The committee of lawyers for the local governments suing the drug industry in federal courts called Tuesday's verdict "a milestone victory" and "overdue reckoning."

The trial before U.S. District Judge Dan Polster in Cleveland was part of a broader constellation of about 3,000 federal opioid lawsuits consolidated under the judge's supervision. Other cases are moving ahead in state courts.

Kevin Roy, chief public policy officer at Shatterproof, an organization that advocates for solutions to addiction, said the verdict could lead pharmacies to follow the path of major distribution companies and some drugmakers that have reached nationwide settlements of opioid cases worth billions. So far, no pharmacy has reached a nationwide settlement.

"It's a signal that the public, at least in select places, feels that there's been exposure and needs to be remedied," Roy said.

The government claims against drugmakers, distributors and pharmacies hinge on state and local public-nuisance laws.

Roy noted that courts haven't been consistent on whether those laws apply to such cases. "There's been a variety of different decisions lately that should give us reason to be cautious about what this really means in the grand scheme," he said.

The public-nuisance argument was rejected twice earlier this month, by judges in California and Oklahoma in cases against opioid manufacturers. The judges ruled that the companies' activities were too removed from the overdoses and deaths, and that this application of public-nuisance law had been stretched beyond recognition.

Information for this article was contributed by Geoff Mulvihill of The Associated Press and by Jan Hoffman of The New York Times. 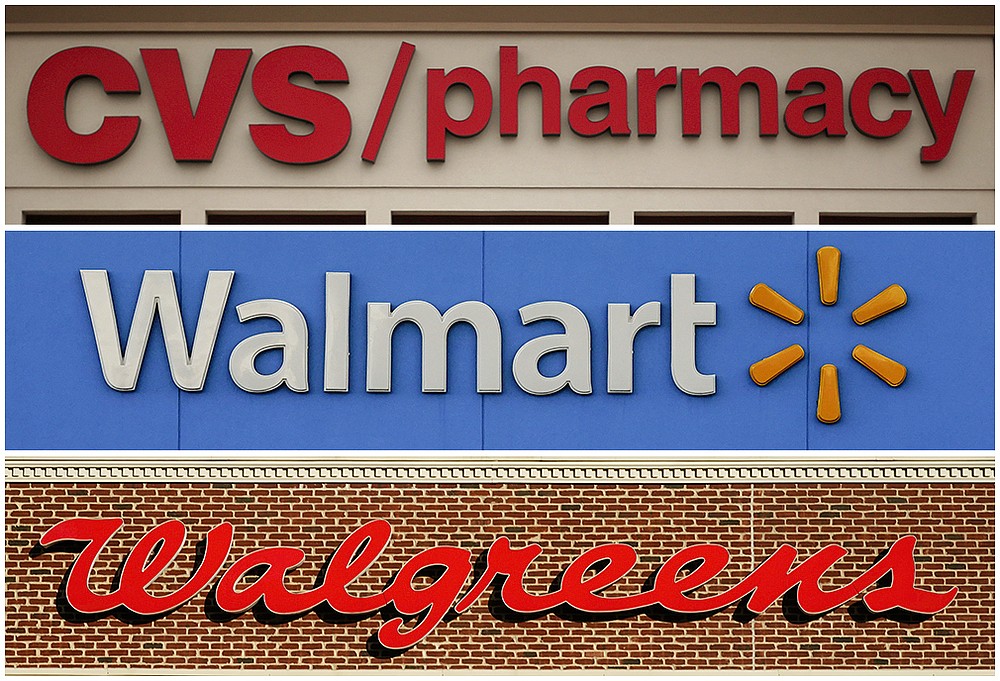 In this undated combination of photos shown are CVS, Walmart and Walgreens locations. The retail pharmacy chains recklessly distributed massive amounts of pain pills in two Ohio counties, a federal jury said Tuesday, Nov. 23, 2021 in a verdict that could set the tone for U.S. city and county governments that want to hold pharmacies accountable for their roles in the opioid crisis. (AP Photo)