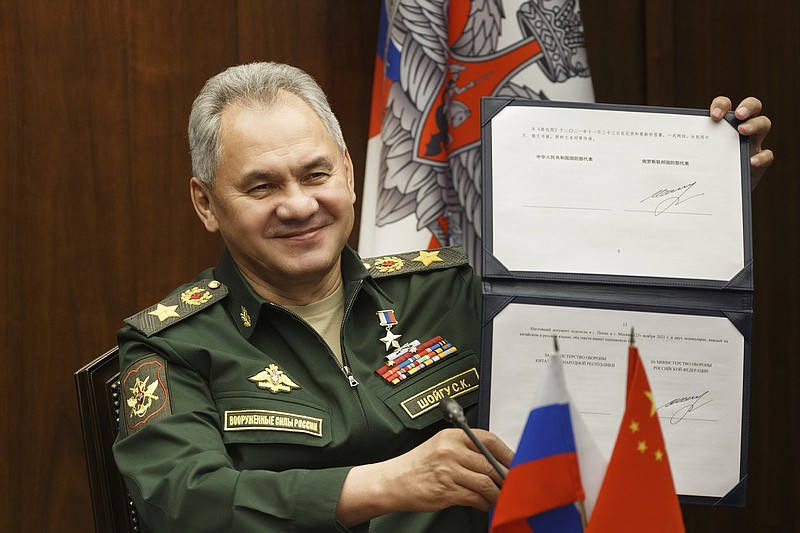 During a video call, Defense Minister Sergei Shoigu and Chinese counterpart Wei Fenghe "expressed a shared interest in stepping up strategic military exercises and joint patrols by Russia and China," according to the Russian Defense Ministry.

"China and Russia have been strategic partners for many years," Shoigu said. "Today, in conditions of increasing geopolitical turbulence and growing conflict potential in various parts of the world, the development of our interaction is especially relevant."

Shoigu pointed to increasingly intensive flights by the U.S. strategic bombers near Russian borders, saying there were 30 such missions in the past month alone.

"This month, during the U.S. Global Thunder strategic force exercise, 10 strategic bombers practiced the scenario of using nuclear weapons against Russia practically simultaneously from the western and eastern directions," Shoigu said, adding that they came as close as 12 miles to the Russian border.

He also noted a rise in the number of U.S. bomber flights over the Sea of Okhotsk, where they practiced reaching the points for launching cruise missiles, saying that poses a threat to both Russia and China.

"In such an environment, the Russian-Chinese coordination becomes a stabilizing factor in global affairs," Shoigu said.

Wei praised Russia for countering what he described as U.S. pressure and military threats.

Shoigu and Wei hailed a series of maneuvers that involved Russian and Chinese warplanes and naval ships, and signed a plan for military cooperation for 2021-25.

The bomber patrol followed joint naval maneuvers by Russian and Chinese warships and aircraft in the Sea of Japan last month.

In August, Shoigu visited China to attend war games, which marked the first time that Russian troops had taken part in drills on Chinese territory.

They were the latest in a series of war games in recent years, intended to underline increasingly close military relations between Moscow and Beijing.

Russian President Vladimir Putin and Chinese leader Xi Jinping have developed strong personal ties to bolster a "strategic partnership" between the former Communist rivals as they both face tensions with the West.

Even though Russia and China in the past rejected the possibility of forging a military alliance, Putin said last year that such a prospect can't be ruled out. He also has noted that Russia has been sharing highly sensitive military technologies with China that helped significantly bolster its defense capability.