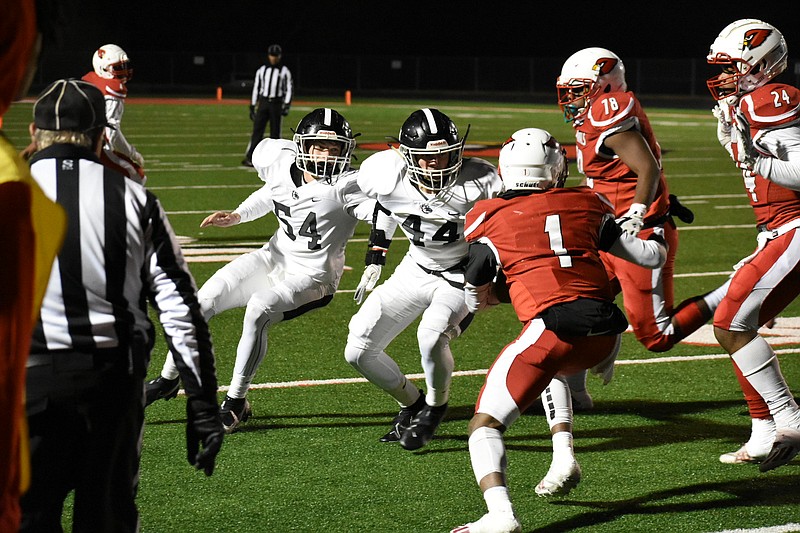 WHITE HALL -- Only once has a White Hall High School football team played for a state championship, and that happened about a generation before any of the current players were born.

"I think that would mean a lot to us," senior Rodrico Bowens said. "I think we've got a good chance of doing it. I think a lot of people are expecting us to do it. We've just got to come out and perform."

Coming off a 35-14 rout of Camden Fairview last Friday, the Bulldogs are capable of getting to the Class 5A title game at Little Rock's War Memorial Stadium.

"It's time for this group to graduate; that's what it's time for," third-year Bulldogs Coach Bobby Bolding said Tuesday. He's seeking to win a state championship at his third school (2002 at Stuttgart; 2014-15 at Pine Bluff).

"They played the Friday after Thanksgiving as sophomores and juniors, and it's time for them to graduate and move on to the next one. They know that. This was not our goal to be here. Our goal is to get to play next week, and they know they're going to have to play really good football to get that chance against a team that is accustomed to winning the Friday after. They're accustomed to it. We're going to have to beat them. They're not going to beat themselves."

The Bulldogs overcame a 10-0 deficit with two Steven Weston rushing touchdowns in the second half.

Bowens suspects, however, that the Warriors -- seeking their fourth straight championship game and first title since 2018 -- will go into Bulldog Stadium with proverbial chips on their shoulders.

"I think this will be the most intense game of the year," said Bowens, who has 92 tackles on the season. "A lot of people will be watching."

Like all of their Jefferson County neighbors, the Bulldogs have prided themselves on identifying two-way playmakers and have relied on them for big plays during the postseason.

Braylon Johnson, a senior defensive back and wide receiver, splashed onto the 2021 playoff scene with a 99-yard kickoff return for a touchdown. Johnson also played defensive hero against Little Rock Christian, recovering a fumble and intercepting a pass in the final minutes.

Weston has caught for 40-plus yards in both the first-round home game against Farmington and at Camden Fairview, and he also intercepted a pass to give the Bulldogs some game-changing momentum in the latter.

"I feel like we game-planned very well against Camden Fairview," Bowens said. "We got to the quarterback and we contained him, but as far as coming into this next game, there's a lot of momentum."